(Minghui.org) The Tian Guo Marching band in Sydney was invited to participate in a spring festival at Corrimal on September 11, 2016. The band was well received with warm applause from spectators.

The “Spring into Corrimal” Family Festival, one of the biggest one-day events in New South Wales, attracted more than 250 vendors and about 55,000 participants. Falun Dafa practitioners have been attending this festival for over ten years. Besides holding the parade which included the Tian Guo Marching Band, they also set up a booth to show passersby hand-made paper lotus flowers and calligraphy. 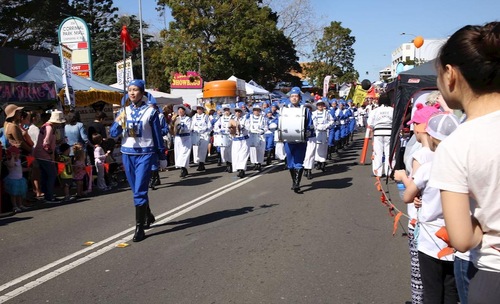 Falun Dafa practitioners attended the parade at the “Spring into Corrimal” Family Festival on September 11, 2016.

Ron, 70, sat up straight as practitioners walked by. “This groups looks great—peaceful and beautiful,” he praised, “I like it very much.”

Ms. Hodgson, who came by with her young child, was glad to receive a calligraphy version of her name in Chinese. Having heard about Falun Dafa previously, she did not know about the suppression in China. Upon hearing more details, she said that the brutality against innocent practitioners must stop.

Ms. Fornasari was glad to hear about the health benefits that Falun Dafa has brought to practitioners. “I was often sick, so I sometimes tried Chinese medicine to relieve the pain.” She said she would learn more about Falun Dafa on the Internet, and signed a petition calling for an end to the persecution. 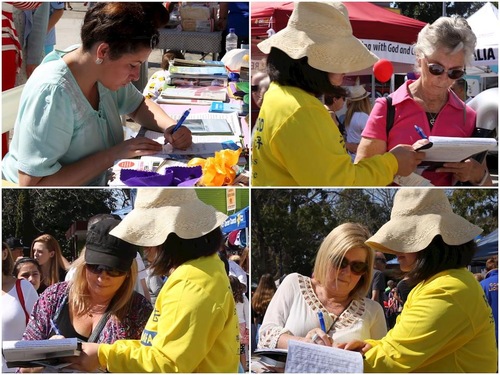 Simon, an emergency service staff member, had not heard about Falun Dafa previously. After a practitioner explained to him what was happening to practitioners in China, Simon said he was sad to hear that, “One of the worst things that can happen to a person is lack of belief. Unfortunately, the Communist Party deprives people of it.”

Bryn, a Chinese practitioner who recently came to Australia as a visiting scholar, was impressed to see the march by Falun Dafa practitioners. “After 17 years of suppression, it is hard to imagine Falun Dafa is so popular overseas.” She said the principles of Truthfulness-Compassion-Forbearance gives people strength, and no one can take them away.

“Believing in Master and Overcoming All Obstacles”