(Minghui.org) Uppsala is the capital of Uppsala County and the fourth largest city in Sweden. Uppsala University is the oldest center for higher education in Northern Europe. A large cultural fair is held in downtown Uppsala every year on the second Saturday in September, bringing together artists and art lovers. In this year's fair, over 600 cultural shows were staged and around 170,000 visitors attended the fair.

The weather was nice on September 10, 2016. On the lawn in front of Uppsala Railway Station, Falun Gong practitioners demonstrated the exercises and raised awareness about the Chinese Communist Party's (CCP) persecution of the practice. They set up informational posters about Falun Gong, a traditional spiritual practice based on Truthfulness-Compassion-Forbearance, and provided information about the 17-year persecution. 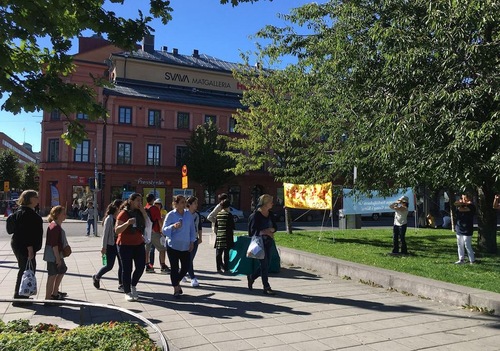 Banners and exercise demonstration draw the attention of passers-by. 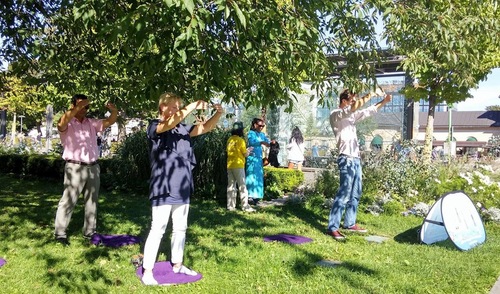 The Falun Gong exercise demonstration drew the attention of many local people. Some passers-by walked over to the lawn and learned the exercises by watching the practitioners. Some stepped forward to talk with practitioners about Falun Gong and the persecution. Upon learning that practitioners in China are persecuted or even killed for their organs, they signed the petition against the CCP's state-sanctioned atrocities.

There were some Chinese students among the passers-by. Many of them stopped to learn more about Falun Gong. They'd heard of the practice but did not know much about it. They listened to practitioner's explanation and accepted informational materials. One woman renounced her membership in the Party after learning about the CCP's live organ harvesting.

“Cured of Illness and Given a New Life”