(Minghui.org) Hard to Believe, an award-winning documentary that exposes the Chinese Communist Party's (CCP) large-scale organ harvesting from living Falun Gong practitioners, was screened at the University of Melbourne on August 18, 2016, and at the University of Victoria on August 20. Among the audience were human right lawyers, sociology professors, law students, and human rights activists, along with the university community.

Attendees at the screening were shocked by the CCP's atrocity. As the title states, it's hard to believe, but the convincing evidence presented in the film made it impossible to discount what is happening. The viewers expressed their condemnation and wanted to help stop what the CCP is doing. 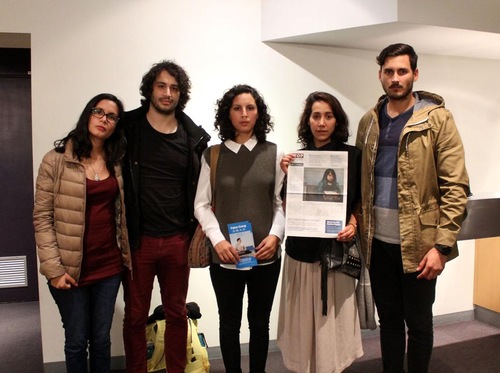 International students at the documentary screening.

Ms. Angela Hernandes is a Master's student at RMIT University. She said after watching the documentary, “I think we should keep informing other people about what's going on. The more we can put out there, the more we can reach. Because this could be happening anywhere in the world, not just in China.” She considered media the best way to reach people.

Angela said she would like to try Falun Gong and invite more people to learn it. She said, “They were professing compassion. It was very touching. What moves me is what kind of world are we living in when we are destroying such great values as Truthfulness and Compassion? It's scary that no one is talking about it because of commercial and political interests.”

Antomella Furlato, a Master's student of law, was convinced that the murders were happening. She said she would like to see the international court take action against China's human right abuses. She planned to tell her classmates and friends about it.

Human Rights Lawyer: “We Have a Duty to Do Everything We Can to Stop This Mass Murder!”

Dr. Katrina Haller, a senior human rights lawyer who works for the human rights organization Right to Life, told the reporter, “I'm shocked. This really entrenches mass murders of Falun Gong practitioners. They are murdered for their belief, and their belief is Truthfulness, Compassion, and Tolerance. They haven't done any harm. But the government just uses them as spare parts for other human beings. It's a shocking infringement on the right to life.” She praised the documentary as “very convincing and authentic. Your heart just goes out to these innocent people who are murdered for their organs. This mass murder is very systematic.”

She said, “When I was little, my mother told me about the Holocaust in World War II. I asked, 'How could that possibly happen?' She said we did not know about it. But now we know about this. We see what's happening. So we have a duty to do everything we can to stop this shocking mass murder.”

She suggested that everyone take action. “Lawyers should go tell their politicians. Medical practitioners need to talk about it in medical circles. Universities should stop training Chinese students to do transplants. Journalists have to write about it. We have a duty to spread the word and do as much as we can to stop this evil business.” 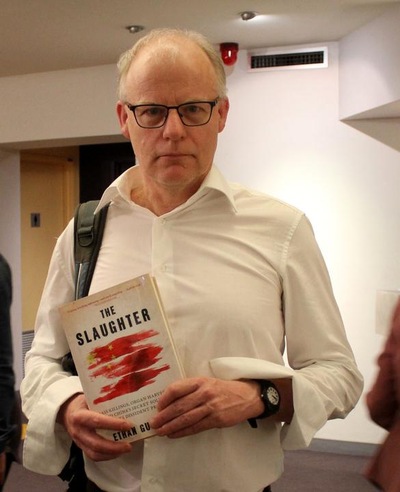 Mr. Jim Meehan, a software engineer in a court, said that, before he saw the film, he wasn't sure if the murders of thousands of people were true because there was nothing in the media. He said he now believes it is.

On the persecution of people pursuing Truthfulness, Compassion, and Forbearance, Mr. Meehan said, “It's clearly terrible! Something needs to be done by the Western world. The Australian Prime Minister should raise the human right issue at the G20.” He said he planned to write a letter to newspapers, complaining about their lack of reporting on this matter. 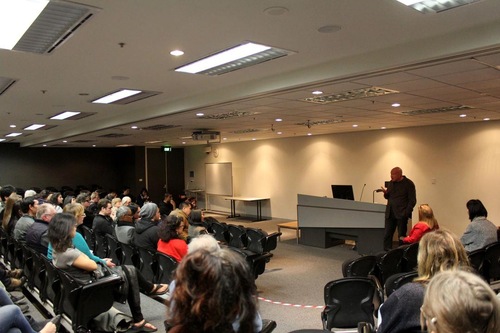 Mr. Ethan Gutmann, American investigative writer and one of the investigators of the CCP's organ harvesting, answers questions after the screening.

Mr. Ethan Gutmann, an American investigative writer and one of the investigators into the CCP's forced organ harvesting, toured with the documentary screening to several cities in Australia and spoke at the events. He said the investigation showed that the number of organ transplants in Chinese hospitals ranged from 60,000 to 100,000 per year and that there was no indication of organ shortages. He pointed out that people didn't face past atrocities such as the Holocaust until afterwards, and it has happened again and again. He encouraged everyone to spread the information.

“Australia: Car Tour Calls for an End to the Ongoing Persecution in China”