(Minghui.org) The atrocity of organ harvesting from living Falun Gong practitioners in China is meeting strong opposition from the public. Recent reports from Ireland, Finland, and Austria and detailed below.

Over 7,000 signatures have been collected in Ireland since July 2015 to support lawsuits against former Chinese leader Jiang Zemin for persecuting Falun Gong, and condemning the organ harvesting from living Falun Gong practitioners in China. 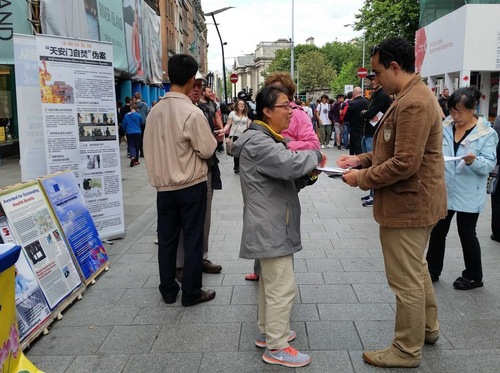 Falun Gong practitioners give out information at Grafton Street in Dublin on July 30, 2016.

One Irish resident said, “I have watched a documentary on this. It [forced organ harvesting] is horrible and it must stop.” 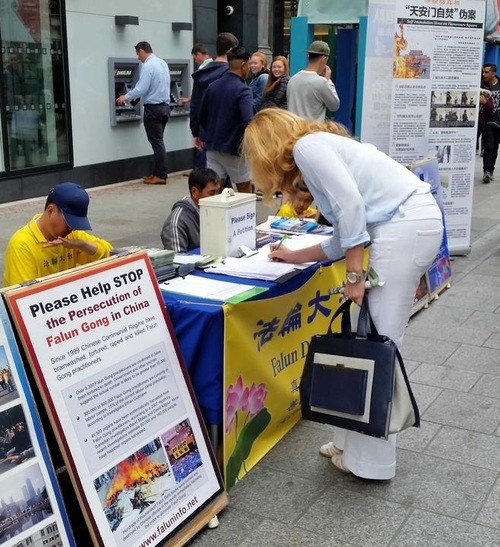 A pedestrian signs a petition.

Summer is the peak of tourist season in Ireland. Many buses of Chinese tourists arrive from Britain to Ireland every day, as the last shopping stop before returning to China. Upon arriving at Grafton Street in Dublin, one of the well-known shopping streets in Ireland, many of them saw the booth set up by Falun Gong practitioners. Some were surprised, some watched the peaceful meditation, and some nodded at practitioners or agreed to renounce their Communist Party memberships for its persecution of Falun Gong.

Mr. Zhang, one of the tour guides, has lived in Britain for nearly 20 years. After talking with practitioners and learning about the severe suppression in China, he signed a petition to support practitioners, and said that Jiang should be brought to justice for his crimes.

In July 2013, the Irish Joint Committee on Foreign Affairs and Trade conducted a hearing and unanimously passed a motion which called on the Irish Government to support the UN and Council of Europe initiatives to oppose forced organ harvesting in China.

The Kotka Maritime Festival, the biggest Finnish maritime carnival, started in 1962. The four-day event attracts about 200,000 visitors. Falun Gong practitioners joined this annual event on July 28-31, to raise awareness of the severe persecution in China. 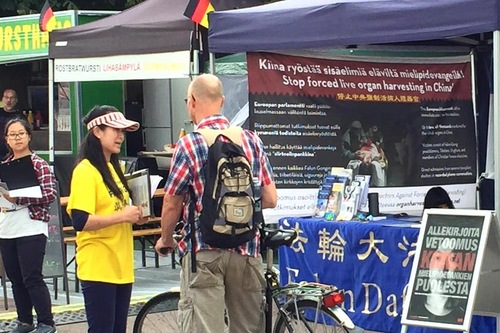 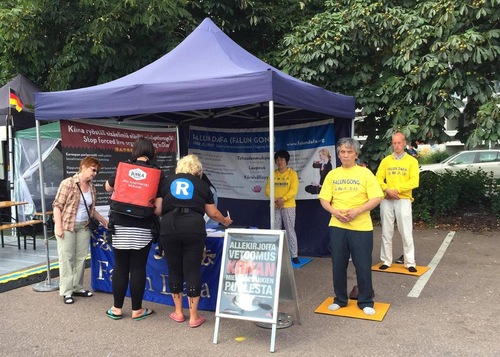 Many passersby signed petitions to support practitioners. Mr. Tuakela said he had read about the suppression in China in the newspaper, including about the organ harvesting atrocity. He signed a petition and asked if there had been any recent updates.

Upon hearing H.Res. 343 passed in the United States House of Representatives and a Written Declaration was co-signed by 48 Members of the European Parliament (MEPs), Mr. Tuakela asked for some materials so that he could inform others about this.

Austrian practitioners came to Salzburg on July 30 to inform the public about the ongoing persecution in China.

Despite the high temperature, a large number of tourists came to to birthplace of Mozart to visit this historical city. Ms. Kraus, a German tourist who was on vacation with her Italian friends, said she had heard about Falun Gong back in Germany. She was interested in obtaining more information.

After a practitioner explained that the petition forms would be submitted to the United Nations seeking help from international society, both Ms. Kraus and her friends signed the petitions. 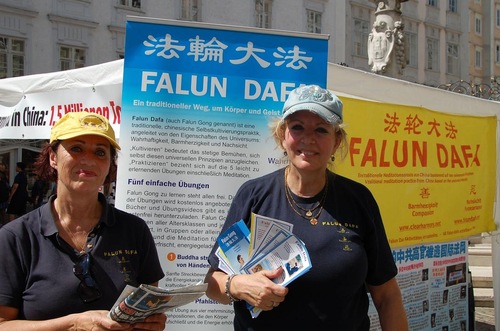 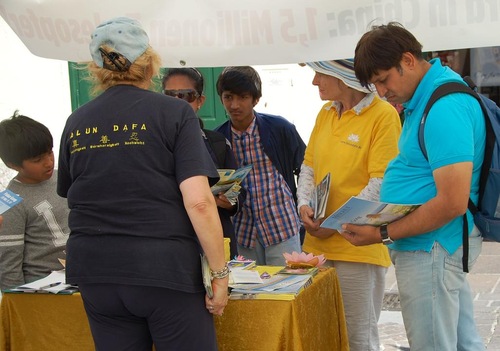 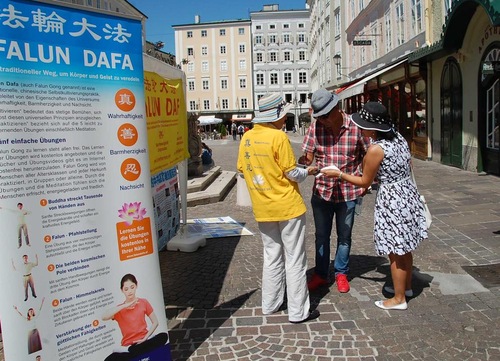 Tourists talk with practitioners to learn about the issues.

One Indian family stopped to read the posters and talked with practitioners to learn more. The entire family signed petitions urging a stop to organ harvesting from living Falun Gong practitioners in China.

The man from the Indian family said, “Forced organ harvesting is wrong and it has to stop.”