(Minghui.org) According to data compiled by Minghui.org, 473 more Falun Gong practitioners in China are now confirmed to have been sentenced to prison for their faith.

These citizens were imprisoned for refusing to renounce their belief, as the communist authorities are ordering them to do, and for talking to the public about the Chinese regime's persecution of Falun Gong.

While the 473 cases are newly reported in the first half of 2016, they concern practitioners sentenced both in 2016 and in years prior. The exact times of each practitioner’s arrest and sentencing remain to be investigated.

6 Die after Being Sentenced to Prison

Imprisoned practitioners are often brutally tortured and psychologically abused. Five of those sentenced are confirmed to have died in prison, with a sixth practitioner losing her life shortly after being granted medical parole. The following reports detail each practitioner’s ordeal.

Causes of Arrests and Sentences

Mr. Cheng Huaigen from Chengdu City, Sichuan Province, was sentenced to four years on June 10, 2016, for hanging up a banner reading “The World Needs Truthfulness-Compassion-Forbearance.”

Four elderly women from Qiqihar, Heilongjiang Province, were sentenced to from three to three and a half years for posting stickers that said “Falun Dafa Is Good” in their residential area. Ms. Zhao Xiuzhi, 78; Ms. Li Guizhi, 76; Ms. Li Fengqin, 72; and Ms. Peng Shurong, 72, received their verdicts in April of this year.

Others were taken into custody because they had been monitored by the police for refusing to renounce Falun Gong. Mr. Zhang Jinsheng from Gucheng County, Hebei Province, was sentenced to prison on May 27, 2016, following his arrest at home on August 21, 2015. The exact sentence is unclear, but he has filed an appeal.

A portion of practitioners were targeted because they filed criminal complaints against former Chinese leader Jiang Zemin for launching the persecution of Falun Gong, violating their constitutional right to freedom of belief.

More than 200,000 Falun Gong practitioners have filed criminal complaints against Jiang Zemin since May 2015, in some cases resulting in police retaliation. The first half of 2016 saw 59 practitioners sentenced to prison for suing Jiang.

In particular, more than 300 from Chaoyang, Liaoning Province, were arrested last November for filing criminal complaints against Jiang. To date, 29 of them have been sentenced to prison, with terms ranging from 6 months to 12 years. The oldest victim is 79-year-old Liu Dianyuan, who was given 11 years.

In addition to sentencing practitioners for refusing to renounce their beliefs, the courts also levied heavy fines on some of them. 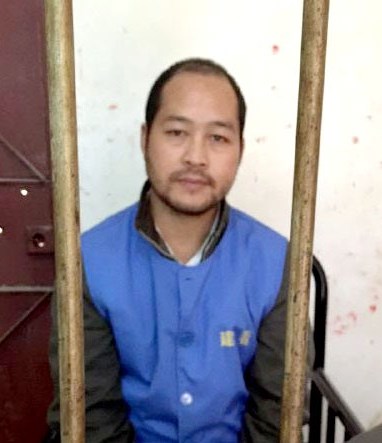 This is Mr. Deng’s 5th arrest for refusing to renounce Falun Gong. He had been sent to forced labor camps twice in the past.

These sentenced practitioners represent almost every province and centrally-controlled municipality. Liaoning Province had the most sentenced (111), followed by Hebei (42), Heilongjiang (40), and Shandong (38). Ten other provinces also registered sentences in the double-digits, ranging from 12 to 24, while the number of cases in the remaining provinces logged single-digits. 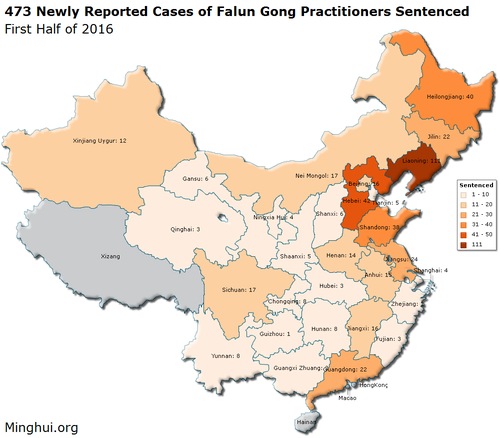 “Donating Money to Production Sites Cannot Be Exchanged for Virtue”