(Minghui.org) With 67 years of tradition, the ten-week Seafair Festival is one of the biggest celebrations in the northwestern U.S., reaching around 2.2 million people. Falun Dafa practitioners performed in the celebration's highlight—the Torchlight Parade—on the evening of July 30, 2016.

This year, the parade featured 117 groups from nearby states, Canada, and other regions in North America, and drew hundreds of thousands of spectators.

The light purple, well-lit Falun Dafa float marched at around 8:30 p.m. and was met with warm applause along the entire route. 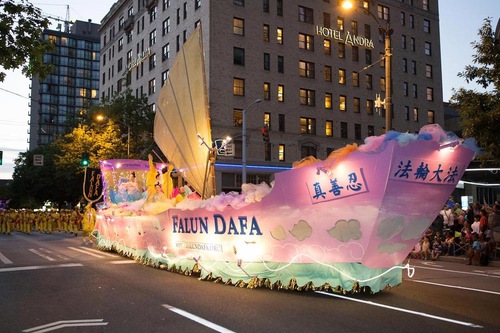 KIRO-TV, one of the major television channels in the Seattle metropolitan area, reviewed last year's performance half an hour before the parade began. The preview included the Falun Dafa waist drum team.

During the parade, KIRO-TV filmed the practitioners' performance from panoramic, close-up, and overhead views, bringing their banners, float, and waist drummers to more than 700,000 viewers. The float was also included on the news of the station's social media site.

A camera crew member from the Seattle Post-Intelligencer (formerly known as Seattle Gazette) repeatedly praised the performance as he took pictures, “This is really awesome!”

“Falun Dafa, also known as Falun Gong, is an ancient meditation system that improves mind and body,” said the host as the group passed the stage. He said the float, which was designed based on the Chinese treasure ship used for seven voyages during the early 15th-century Ming Dynasty, had won at least 11 awards in various parades.

The meditation practice, as demonstrated by practitioners on the float, has also brought people inner peace, said the host. 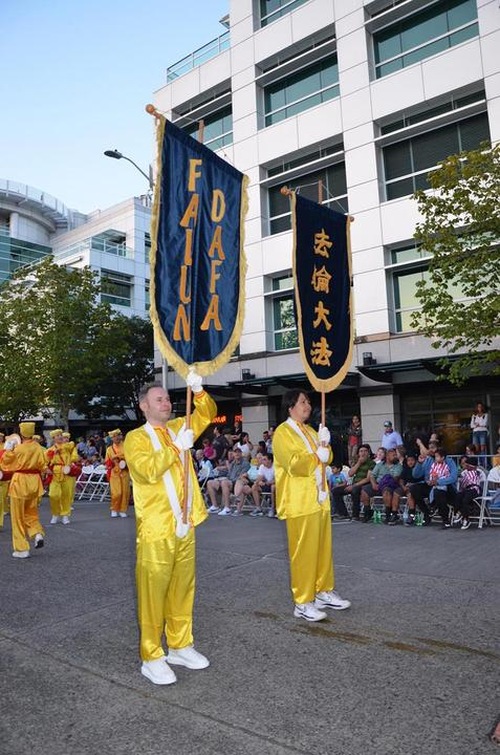 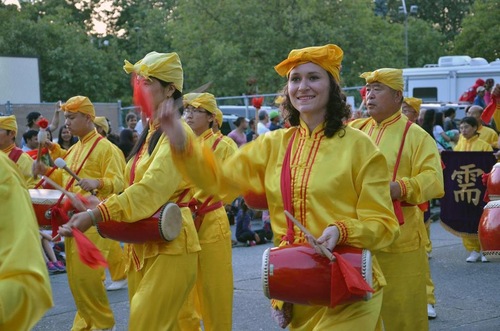 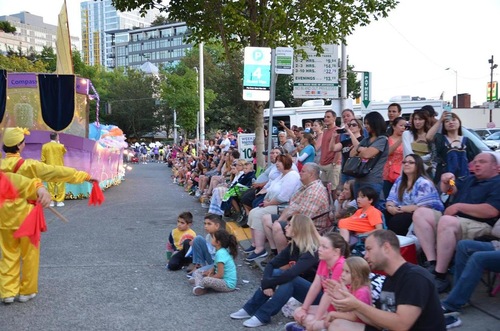 The bright colors and energetic drum beats were applauded by spectators.

“The Best Performance I've Ever Seen”

Patty Goos, who watched the parade with two friends, was astonished by the practitioners' float and performances. “Bravo! This is truly magnificent. It is the best performance I've ever seen.”

Upon hearing that Falun Dafa practitioners are persecuted in China for their belief and have even become victims of forced organ harvesting for profit by the Chinese communist regime, Goos was startled and said, “I am sorry to hear of this tragedy. It should not have happened.”

French immigrant Mírez was watching the parade with her granddaughter and took many photos of the practitioners' performance. Like Goos, she also hopes to learn the Falun Dafa exercises in the future.

Many members of the Sea Gals, cheerleaders for the Seattle Seahawks, gave a thumbs-up to the performers. Queen, one girl from another cheerleader group, was surprised to hear about the suppression in China and said the brutality must stop. 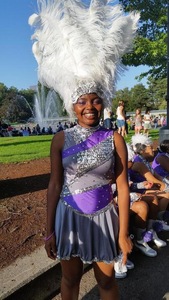 Cheerleader Queen hopes the persecution of Falun Dafa in China will end soon.

Connie, who represents a South Korean cultural society, was dressed in a traditional wedding costume. He was glad to see practitioners in the parade and agreed that traditional culture and values should not be suppressed by the communist regime. 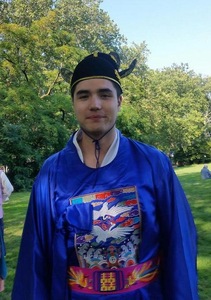 Ms. Li came from Shanghai to visit her son, who works at Amazon. Both the mother and son greeted practitioners and said they liked the performance very much.

“I used to play drums, too,” Ms. Li said as she moved with the rhythm. “I'm happy that so many people are here.” 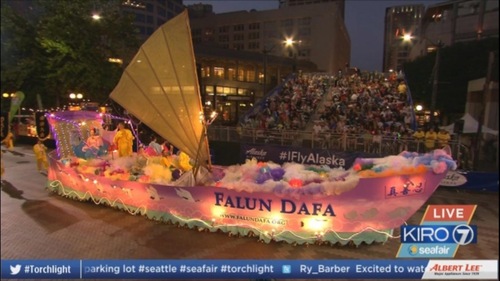 Live broadcast by KIRO-TV of the practitioners' performance.

The great success did not come without obstacles. On the day before the parade, practitioners were notified at about 6:30 p.m. that the permit for the float had been rejected for lack for fire safety measures.

Practitioners immediately worked on the remediation actions. Some searched online for further information, and some consulted with the ceremony marshal for advice. Safety equipment was purchased in a short time, and fire hazard insurance policies were also secured before the permit was finally approved at 10:30 p.m.

The cooperative and efficient teamwork earned respect from the ceremony marshals. “Glad to see you've made it. Well done!” praised one of the marshals during the parade.

“Minghui Report: 4,892 Arrested for Practicing Falun Gong in First Half of 2016”