The Teachings of Falun Gong Improve Behavior, Health, and Outlook

(Minghui.org) Many residents of Jiayi City, Taiwan, came to a local conference hall to learn Falun Gong (also known as Falun Dafa) and the exercises on the morning on July 30, 2016.

Accompanied by the tranquil music, Falun Gong practitioners demonstrated the five exercises as some in the audience watched while others imitated the movements. One man said that he felt so warm that he was sweating while doing the slow-moving exercises. Another agreed and said that he felt really comfortable, as if energy was flowing through his body.

A practitioner explained to them that Falun Gong was a supreme Buddha School practice, and the exercises were meant to open up all the energy channels in the body, which was why they felt so warm and relaxed. 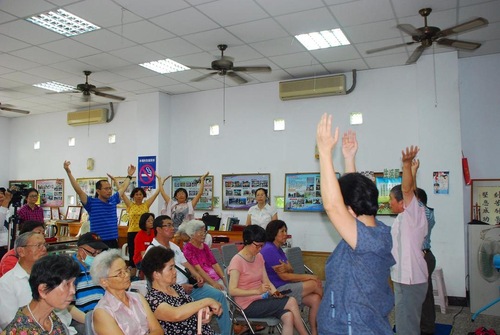 In a local conference hall in Jiayi City, local residents watch practitioners demonstrate the five exercises and some imitate the movements.

The practitioners, who come from all walks of life, have benefited tremendously from the practice both physically and mentally. They volunteered to share their passion with others free of charge.

One of the practitioners was a schoolteacher. After he started to behave according to the teachings of Falun Gong in his everyday life, his relationships with his family improved dramatically. Witnessing this, many of his family members became practitioners as well. His wife, who was also a teacher, began to treat others according to the principles of Truthfulness-Compassion-Forbearance. She believes that it is crucial to teach school children these great values.

A practitioner had to move because her husband was addicted to gambling and lost their house. Her new neighbor told her about Falun Gong. As soon as she heard that Falun Gong could make her a better person, she knew that she wanted to learn it. Her husband later became a practitioner as well and quit gambling.

While some have improved their temperaments and behavior, others had their health problems resolved through the practice. “Three days into the practice, while I could barely do the first exercise, the hives that had bothered me for 16 years disappeared and never came back,” said one practitioner. The migraines she had since childhood disappeared as well.

There are also practitioners who became positive and optimistic after learning Falun Gong. “The practice made me a stronger person. I couldn't handle the death of a family member and move on with my life. I was depressed and frightened. The teachings of Falun Gong enable me to see life from a very different angle, and I can face it now,” said a practitioner. 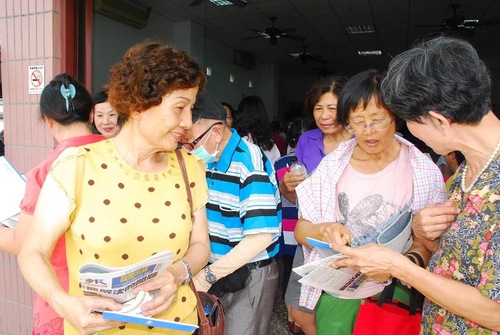 After the conference ends, the residents leave with smiles of satisfaction.