(Minghui.org) Before Canadian Prime Minister Justin Trudeau's upcoming G20 Submit trip to China next week, a government spokesperson assured Falun Gong practitioners at a media briefing on Friday: “The issue of human rights, you can absolutely expect to be raised as part of the prime minister’s trip, and it is part of the ongoing dialogue that we expect to have with China.”

She added that Falun Gong is very much one of the core human rights issues that “Canada is very concerned about.”

The postcards and petition ask the Prime Minister to take every opportunity to speak with the Chinese authorities to urge them to stop the persecution of Falun Gong and the forcible seizing of vital organs from Falun Gong prisoners of conscience.

Thousands of signatures were collected over the last month in various Canadian cities. 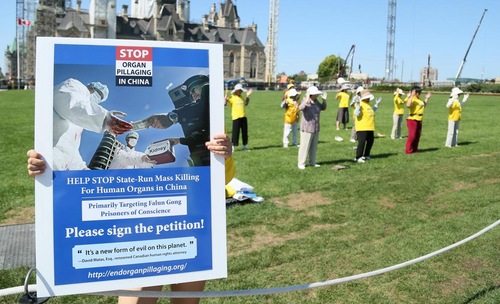 Falun Gong demonstration in front of Parliament Hill in Ottawa on August 26, calling for help to stop the persecution. 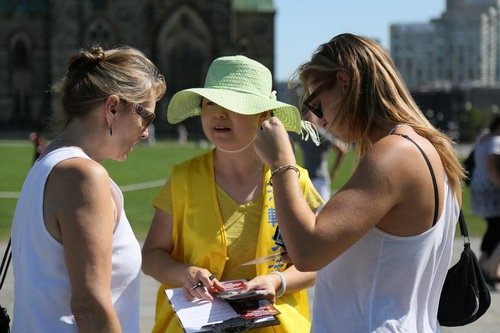 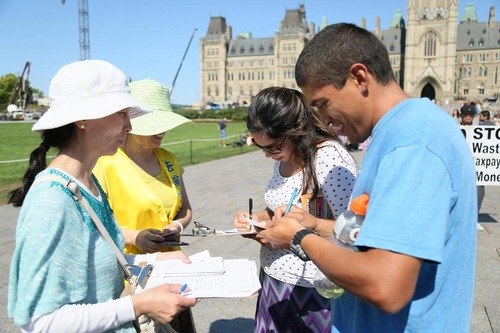 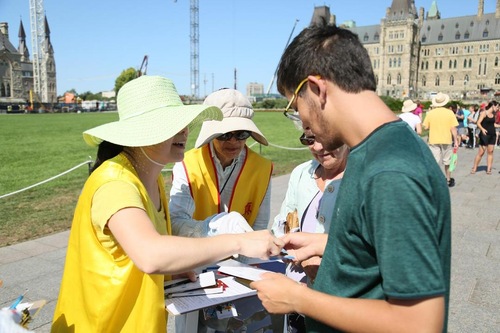 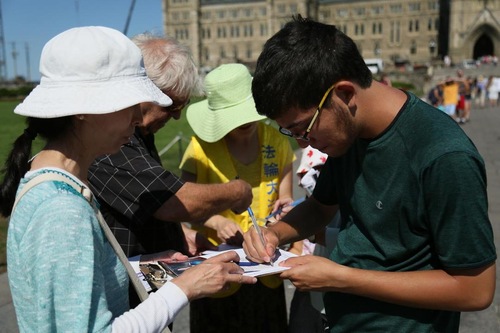 Canadian citizens sign the petition in front Parliament Hill to condemn the persecution of Falun Gong.

Press Conference at the Parliament Building

Practitioners held a press conference at the parliament building on the same day of the signatures delivery.

Former Canadian Parliament Member and diplomat David Kilgour presented evidence of the state-sanctioned organ harvesting in China that he and his colleagues have collected over multi-year independent investigations.

Mr. Kilgour called upon Prime Minister Trudeau to bring up the issue of the persecution in meetings with the Chinese president.

He said that according to a recent poll, 76% of Canadians do not place any trust in the Chinese Communist Party. Canadians know well about the multiple human rights violations in China, especially the brutal 17-year persecution of Falun Gong, Kilgour said.

At the press conference, several Falun Gong practitioners called for the release of their family members imprisoned in China.

Ms. Lu Hongyan's mother Chen Huixia was arrested two months ago, and has been jailed in a detention center in Shijiazhuang City.

This is not the first time Chen Huixia was persecuted for her belief in Falun Gong, according to Ms. Lu. Ms. Chen was first arrested in 2003.

Ms. Lu said at the press conference: “My mother was tortured in a detention center. She was tied to a chair for a long time, not allowed to move, which caused damage in her muscles. Now she has difficulty standing and walking.”

Mr. Li Zhe also spoke of his father Li Xiaobo's experience, who was sentenced to 8 years in 2005. In prison, Li Xiaobo was forced to stand naked in cold water for hours and sometimes days in winter. He was also forced to run for almost 20 miles every day for a period of time.

In April 2014, Li Xiaobo was arrested again. A year later, he was again sentenced to eight years.

A similar press conference was held August 24 in front of the city hall of Vancouver. Local Falun Gong practitioners called for the release of 12 jailed family members of theirs, and called on Prime Minister Trudeau to help during his China trip. 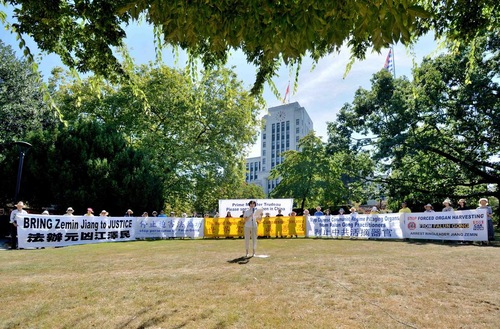 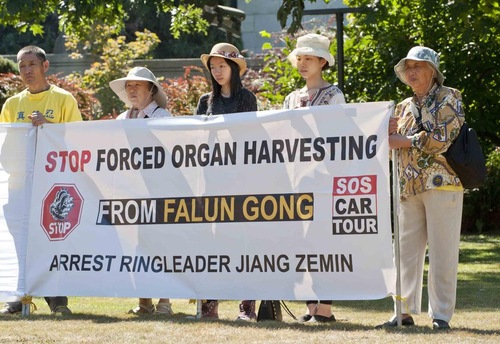 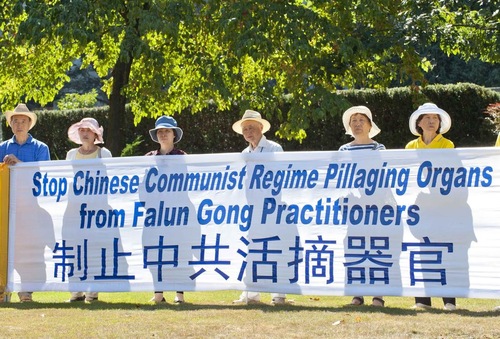 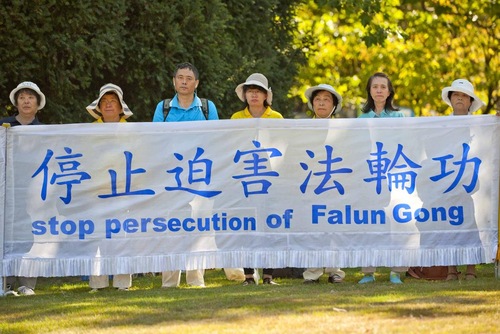 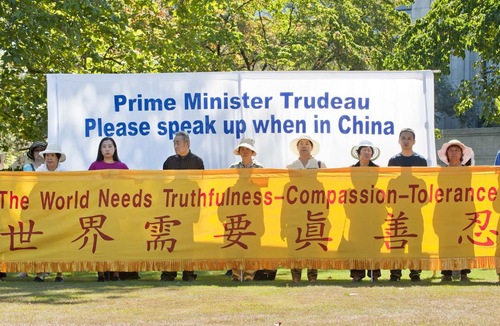 Elvis Jiang told the media that ten members of his sister's family, all Falun Gong practitioners, were arrested in July 2016. His sister and brother-in-law are still imprisoned, and they have not been allowed to meet with their lawyers. He hopes the Canadian government will help. 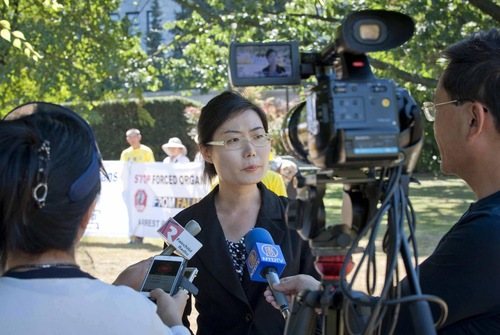 Alice Zhang said that her mother, Tang Huafeng, was arrested in February 2014, and is still imprisoned.

The practitioners' campaign to raise awareness of the persecution does not end with the Prime Minister's China trip. A car tour that started on July 13 aims to visit 300 towns in eight provinces, to let people know about the human rights abuses in China. The tour will continue into the beginning of September. The focus of the car tour is to expose the government-sanctioned forced organ harvesting from Falun Gong practitioners in China.

The car tour has split into four teams, covering three Prairie provinces (Western Canada) and three provinces in Eastern Canada. Altogether, the practitioners involved have visited 80 some cities and talked to 120 local politicians and lawmakers. 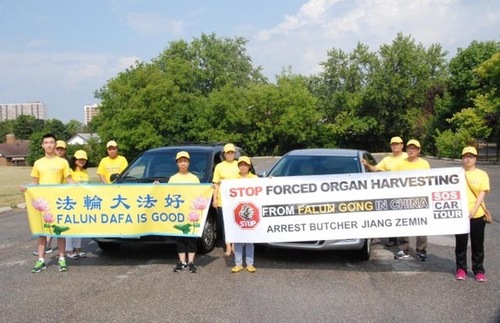 One team of the car tour sets off from Toronto. 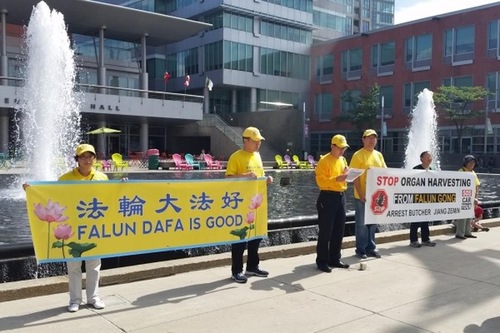 The car tour in Kitchener, Ontario, on July 13. 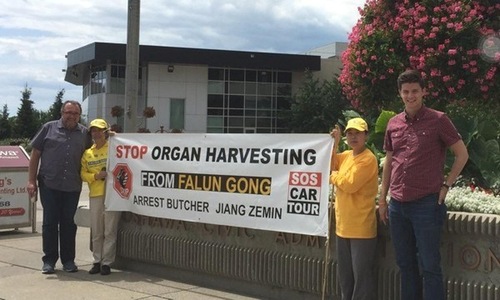 So far, the car tour has been well-received by local governments and has attracted a lot of media attention. More than 100 media organizations have interviewed practitioners involved in the car tour, and some 70 reports have been published so far. 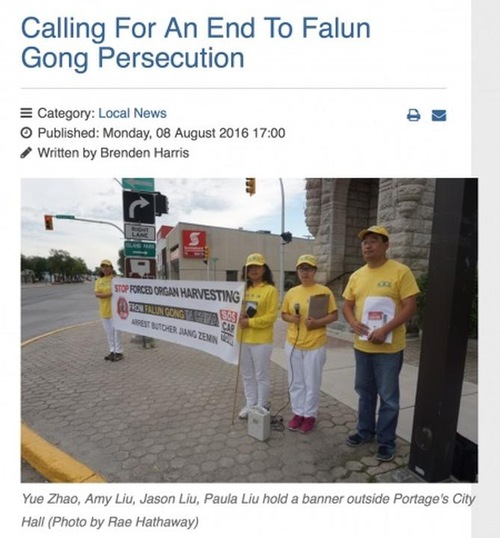 Screenshot of an article published by Portageonline.com covering the car tour in Portage la Prairie, Manitoba on August 8. 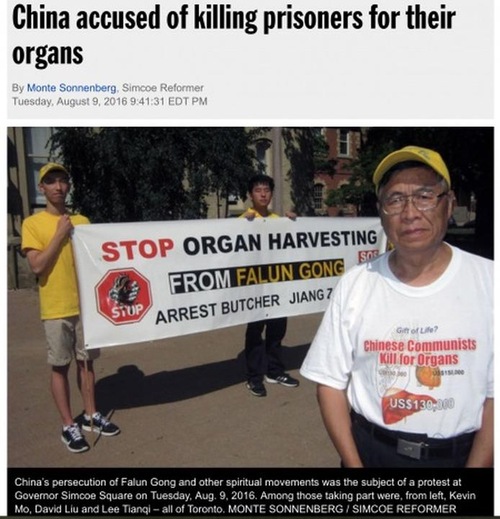 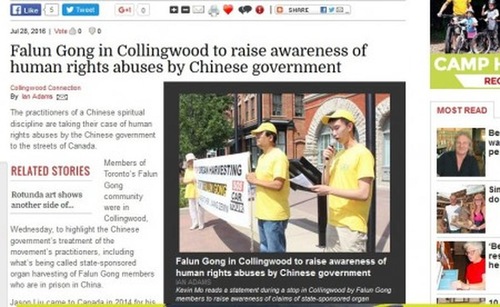 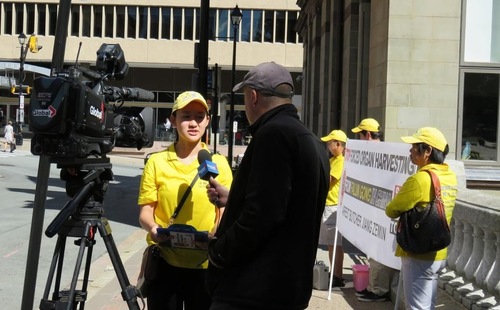 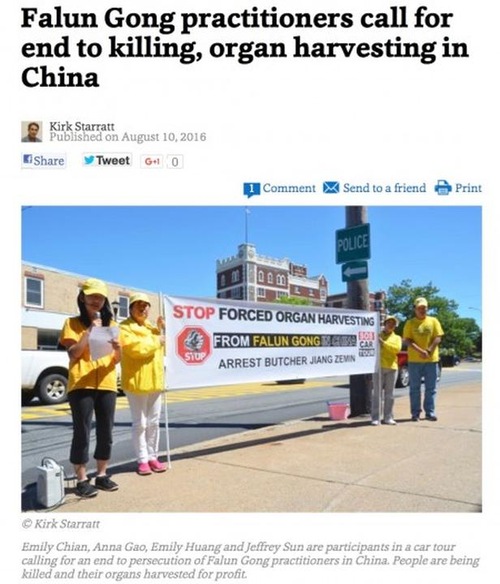 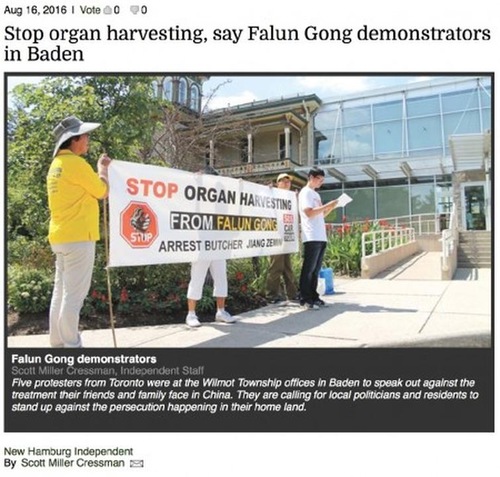 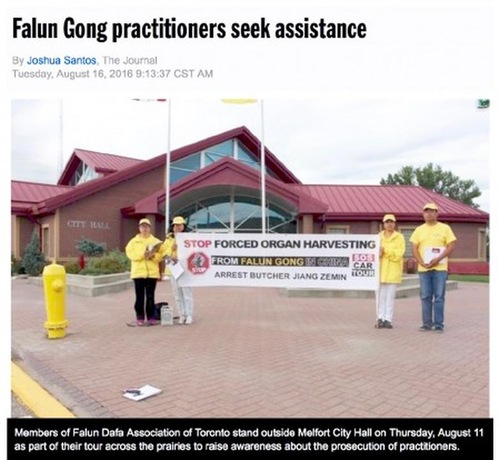 Screenshot of the report in the Melfort Journal 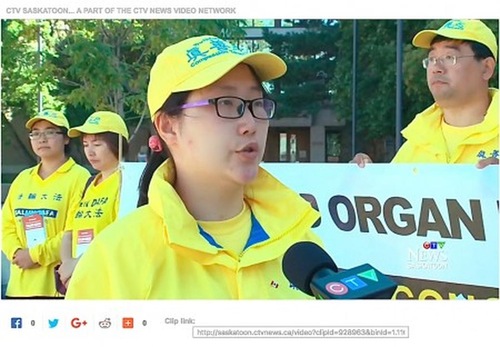 CTV, the most popular TV station in Canada, interviews practitioner Ms. Liu in front of the Sasaktoon City Hall on August 15. During their short visit, practitioners collected more than 200 signatures. 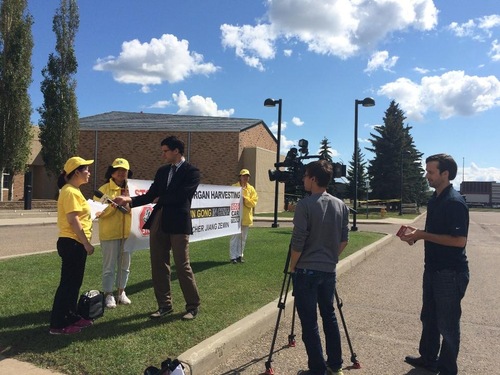 The tour in the east provinces also drew attention. Numerous media, including Peterborough This Week, Peterborough Examiner, Collingwood Connection, Orangeville Citizen, The Intelligencer, Brandon Sun, Niagara This Week, Simcoe Reformer, Castanet.net, The Daily Courier, and Local Xpress.ca, among others, reported on the car tour and the latest investigation findings on forced organ harvesting in China. 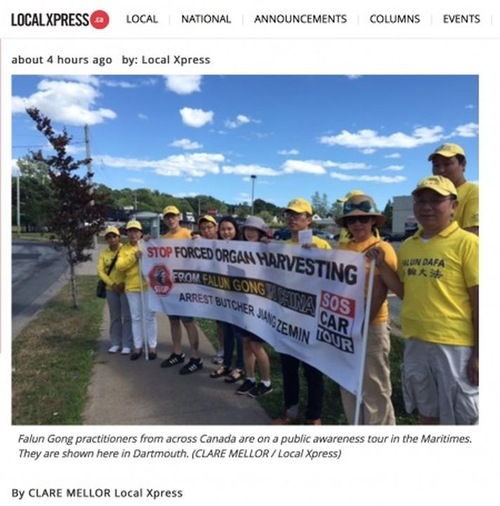 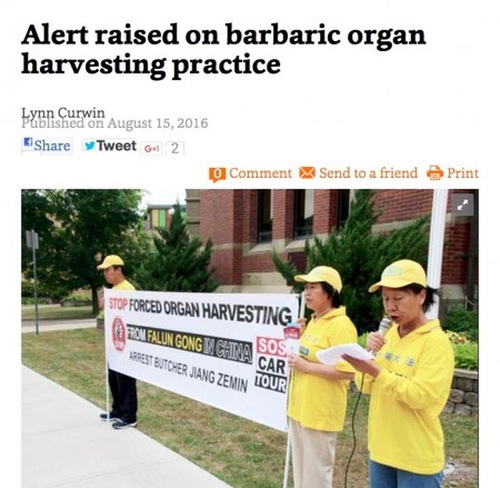 Truro Daily News in Nova Scotia told about practitioner Mrs. Huang's story, who was arrested four times and forced to do hard labor in China.

During the car tour, people were shocked to learn that the Chinese government has been illegally harvesting organs from living Falun Gong practitioners for profit. Many signed the petition calling from Prime Minister Trudeau to bring up the matter with his Chinese counterpart. 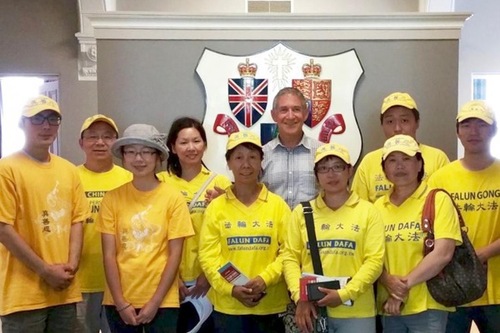 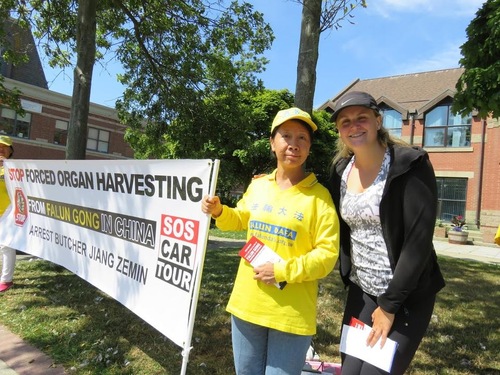 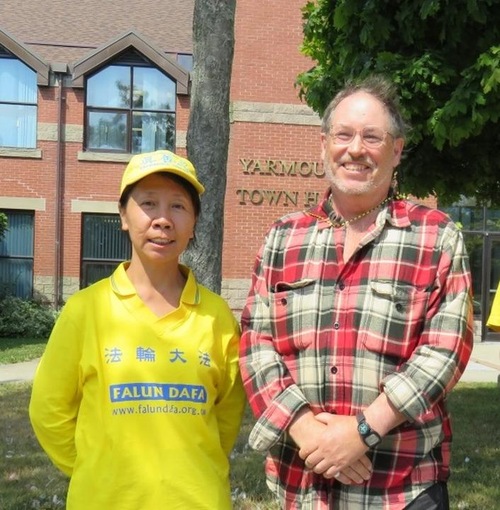 Shaun Cooper (right) from Yarmouth was happy to run into Diana, a practitioner who was one of his colleagues 20 years ago in Zhuhai, China. Shaun said he has read a great deal about Falun Gong, and encouraged practitioners to keep up the good work. 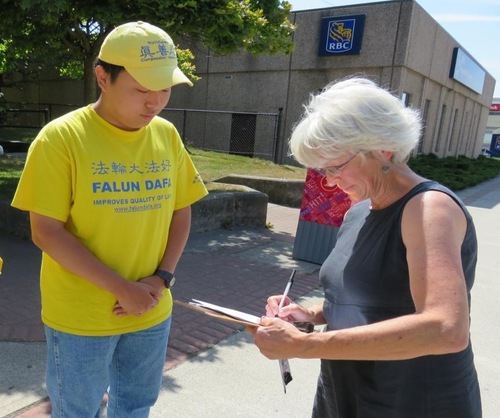 A woman hurried out of the Yarmouth City Hall to catch up with practitioners, and asked to sign the petition.

“True Calling: Ascending to Heaven Upon Completion of Cultivation”