(Minghui.org) Three Falun Gong practitioners from Changde City, Hunan Province, were illegally sentenced to four years in prison on or around July 20, 2016.

They were taken into custody during a mass arrest on August 11, 2015, along with 22 other practitioners in Changde City. They were held at the Baiheshan Detention Center for almost a year. They were tried by the Wuling District Court in April 2016. Their attorneys pleaded not guilty on their behalf. The court did not reach a verdict immediately.

Because the local authorities had circulated propaganda that they would be released unconditionally one month after the trial, the sentences surprised many people.

The three practitioners are Ms. Wang Xiaoqun, Ms. Shi Yuhua and Ms. Yin Hong. They were detained and imprisoned many times in the past and subjected to physical and mental torture.

Ms. Wang Xiaoqun, over 70 years old, was illegally sentenced to seven and a half years in prison in 2006. She was incarcerated in Hunan Province Women's Prison. Using torture, the prison authorities tried to force her to give up practicing Falun Gong. At one point, she was hung up and suspended from handcuffs for two days. 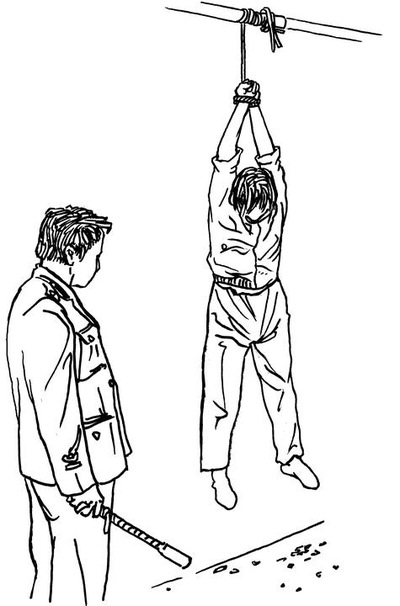 Torture Illustration: Hung up by handcuffs

Ms. Shi Yuhua was given one year of forced labor without trial in 2000. She was subjected to brutal torture in the Baimalong Women's Forced Labor Camp. She was detained at a brainwashing center located in the Yuyuan Hotel in 2002. She was given one year of forced labor again that year. She was sentenced to eight years in prison in 2006 and was incarcerated in the Changsha City Women's Prison.

Ms. Shi was subjected to brutal torture during multiple detentions and imprisonments, including being handcuffed and suspended from the cuffs, shocked with electric batons, and was subjected to force feeding. The guards pried open her mouth with chopsticks and pushed a sharpened bamboo tube inside her mouth to force-feed her. This loosened her teeth and damaged her mouth and throat, which never completely healed. She became emaciated, and her face became distorted. She also has migraine headaches.

Ms. Yin Hong Detained Many Times and Imprisoned for 8 Years

Ms. Yin was incarcerated in the Changsha City Women's Prison for eight years since 2006 and was tortured. She was forced to stand for three months because she refused to give up her belief in Falun Gong. She was handcuffed and hung from her wrists. The handcuffs became deeply embedded into her wrists and in order to remove them, they had to be cut open. The marks on her wrists are still there.

Ms. Yin lost her job due to the detention and imprisonment. Traumatized and grieving for her, her husband and mother passed away. Her daughter was poisoned by the CCP's lies and now hates her. She developed severe hearing loss and has lived a very difficult life.

“On the Concerns Caused by the Piece About Assistant Souls*”