Letter from Wang Zhiwen: What Happened After 2014 Release from Prison

(Minghui.org) Danielle Wang was 19 when her father, Wang Zhiwen, was arrested on July 20, 1999 and later sentenced to 16 years in prison.

The elder Wang, 67, was one of the first coordinators of the former China Falun Dafa Association to be arrested when the Chinese Communist Party launched its persecution of the spiritual practice on July 20, 1999.

About two years after Mr. Wang’s release, his daughter and son-in-law, both U.S. citizens, traveled to China to help him secure immigration documents to join them in the States. 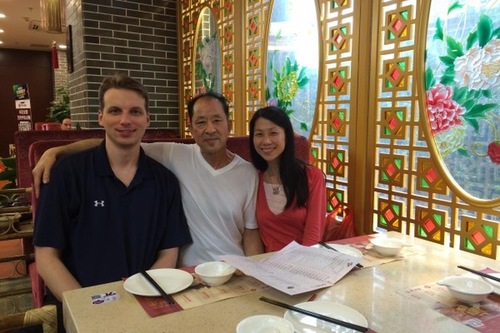 Ms. Wang said, “I was initially very happy and optimistic, as [my father] got his passport and immigration visa smoothly. I thought for sure we’d be able to bring him out of China.”

Her dream was shattered at the border control in Guangzhou, Guangdong Province on August 6, 2016. She told a reporter, “Without any reason, they cut off one corner of my father’s passport. They told me the Ministry of Public Security ordered the cancellation of the passport.”

While the father and daughter were separated again, Mr. Wang managed to submit the following personal account to Minghui.org.

My name is Wang Zhiwen. Below is what happened to me after I was released from prison.

I was taken straight to a brainwashing center in Changping County (Xicheng District Law Education Center) on my day of release, October 18, 2014. I wasn’t allowed to go home until one week later on October 25.

I found four infrared surveillance cameras installed near my apartment complex, with two people on duty monitoring me around the clock. They were arranged by the State Security Bureau and stay in a water pump house near the apartment complex. They knew who visited me and my neighbors were also aware of this.

The local community committee and property management office also kept an eye on me at all times.

In addition, officials tapped my phone and followed me when I went out, especially during days they consider “sensitive.” The constant monitoring of me not only interfered with my daily life but also made it hard to have normal social interactions with neighbors.

I had been thinking about reuniting with my daughter since my release. For obvious reasons, the only way to achieve that is for me to apply for a passport and go to the U.S. Police officers are aware of that.

I went to Xicheng District Exit-Entry Administration in November 2014, but my application was rejected. Officers did not give a written explanation, they just told me I was not eligible because I was still under disfranchisement. I checked online and did not find such a policy.

As time continued, there was some progress. In January 2016, I registered online and applied for a passport. This began the process of my reunion with my daughter.

However, harassment from the police did not stop:

1) Li Yajun and Wang Tongli, two officers from Yuetan Police Station in Xicheng District, came to my home in February or March this year. They ordered me to turn in my passport and said I could request it when needed. I refused to do so.

Li later contacted me by phone, saying his superiors wanted to meet me at the police station. I told him that, since we had already discussed the matter, there is no need for me to go to the police station. We could meet at my home if needed. I explained to him that, because my passport was approved, that means it is legitimate.

2) After trying one more time to ask me for my passport and failing, these two officers said, since I did not turn in my passport, “We have revoked your passport.”

3) The authorities intensified their monitoring of me in July 2016. From a distance, and up close, to standing next to me, they dispatched two people to watch me all the time, day and night. When I went grocery shopping or for a walk, they were by my side. When I went for a haircut, they followed me and stayed in the barber shop. When I went for errands, they were next to me and even asked me, “Where are you going today?” This indicates they knew me very well.

4) Four officers came to my home on the morning of July 31 (Sunday). They were officer Liu from Xicheng Police Department and three from Yuetan Police Station (deputy chief, Wang Tongli, and officer Sun). Officer Liu led the discussion and he said to me, “You can’t leave China because you are still under disfranchisement. In the future, every time you plan to travel outside Beijing, you must submit an application to the police station.”

I replied, “If you want to keep watching me, it is your choice. I don’t acknowledge what you said. In the past I could not apply for a passport; now I have received it. If you want to know what has changed, please check with higher officers. Regarding disfranchisement, as far as I know, there is no such a policy. These policies are available online. If you have additional rules, please show them to me.”

Officer Liu said that, their coming here and communicating with me was “the bottom of bottom line.” I told them, “You have sent people watching and accompanying me, and they take pictures even if I just speak with someone. This has severely affected my life.” These officers said I could report this to higher officers.

5) On July 31, I was able to get out of their sight (three people were on duty watching me at that time). From there, I began my trip to apply for visa in Guangzhou.

At Guangzhou Medical Examination Center, I was followed by staff from the State Security Bureau. After I obtained a visa at the U.S. Consulate in Guangzhou, my residence was being watched.

Between 9:00 and 11:00 pm on August 5, 2016, over 20 people including some from the local police station, came to my rental property. They told the property owner there had been illegal activities going on that involved more than 10 people. However, these officials were stopped and they did not proceed further.

6) On the morning of August 6, I took the legal documents, including passport and U.S. visa, to Exit-Entry Administration for the exit procedure. One custom officer checked my passport and said, “Have you lost your passport before? It was revoked in the online database. It was revoked internally by police and there was no specific reason.”

It has been a long process for me to reunite with my daughter Xiaodan (Danielle), because it requires preparation of materials and financial input. My family is waiting for this, and many people as well as agencies have been helping me. But because of certain actions from the police, it did not work out.

Above is what has happened to me. Family reunion is simple. But some officers from police and State Security Bureau mobilized the state apparatus to intervene.

Once again, I want to go to the United States to meet and live with my daughter. I have followed legal procedure and obtained legal documents. This is what actually happened in China and I hope people will help with this.

“Position Holders of the 610 Office and the Consequences They Faced”