(Minghui .org) Falun Gong practitioner Li Yan, 16, lives in Dublin, the capital of the Republic of Ireland. He immigrated to Ireland with his parents when he was one year old. He has been practicing Falun Gong with his mother.

Practicing Falun Gong has given him wisdom and helped him focus on his studies. He is an outstanding student and brings home excellent grades.

In his spare time he participates in different Falun Gong activities. Most of the time he and fellow practitioners peacefully appeal for the release of practitioners in China who are persecuted by the Chinese Communist Party (CCP).

Despite his young age he has talked to European Parliament members face-to-face about the persecution of Falun Gong in China.

Peaceful Appeal to the European Parliament 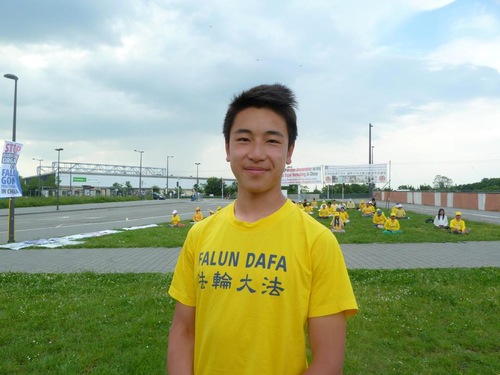 Li Yan, 16, outside the European Parliament in Strasbourg, France

This was Li's first week of his summer vacation. His mother was at work, so his father, who is not a practitioner, drove him to the Dublin airport at about 4 a.m. He met up with fellow practitioners before they took an airplane and public transportation to Strasbourg for the eight hour trip.

He stayed in Strasbourg for three-and-a-half days, despite extremely hot weather, as well as occasional strong winds and rain. He said that he avoided feeling tired by doing the Falun Gong exercises, “I felt relaxed after practicing the exercises.”

This was his first time meeting with European Parliament members. He was dressed for the occasion and wore a suit and tie. They talked to the members about the state-sanctioned organ harvesting from living Falun Gong practitioners.

Resolving Conflicts in School with a Calm Mind

Li Yan’s mother started practicing Falun Gong before he was born and he joined her at the age of four. His father does not cultivate Falun Gong but is very supportive and participates in activities that inform people about Falun Gong and the persecution.

“The persecution is wrong,” Li said. “The Chinese Communist Party (CCP) has vilified Falun Gong. My father is very clear about that.”

Everyone at school knows that Li practices Falun Gong.

“I follow the Falun Gong principles of Truthfulness-Compassion-Forbearance,” he said. “If I face a conflict, I remain calm.”

Li and a classmate partnered in a project last year that simulated running a startup business. Their project won first prize.

But the project did not get off to a smooth start.

“At the beginning I did all the work,” he said. “It was not a problem, as I liked doing this sort of work. But, the workload increased and I could not handle everything. However, my partner still did not help. I became somewhat upset and explained the situation to my parents. They told me, ‘It is all right. You can talk to him and he will do the work with you.’ Thus, I talked to the student with a calm mind and resolved the situation.”

Studying had never been too difficult for Li. Now, he is in the 11th grade, and the homework has become more difficult, requiring more time.

He continued, “Forming a good habit of reading the Fa and practicing the exercises every day helps me with my studies. I want to catch up with my Fa study and exercises this summer to make up for the losses caused by shortchanging of my time during the school term.”

He participated in an international science competition representing Ireland in Argentina in 2015. He was the only Asian student in the six-student team. He won a bronze medal. This was the highest award he has been awarded so far.

Presently, he is preparing his college application for the 2017 school year. He is interested to major in aerospace engineering.

When asked how he felt about the competition for getting a placement in that field, he said, “One gets accepted to that major if one has high test scores. I will study hard and prepare for the test, and I will diligently read the Fa and do the exercises. Whether I am accepted or not depends on the predestined arrangement.”

Li grew up outside of China. However, many people consider that his modesty is in line with traditional Chinese culture.

Before the interview, he explained in Chinese that his Chinese language skills may not be that good. In fact, except for a few professional terms, he spoke Chinese throughout the interview. Compared to most Chinese children who grow up outside of China, his spoken Chinese can be considered outstanding.

Speaking about his scholastic achievements, he was down to earth. His tone of voice was almost as if he talked about someone else.

He also is rather modest about other achievements, such as playing the violin. In fact, he won first place in his school’s competition.

His calmness and kindness are mostly because of the way his parents raised him, he said. “My mom and dad are very reasonable. When I make mistakes, my mom and dad will tell me, ‘You made a mistake this time; do it right next time, or don’t do it again.’ I would then correct myself.”

Talking about Falun Gong at School

For example, his friends once asked him why he did not participate in their weekend activities. He said, “I partook in the Falun Dafa Information Day activities and explained the persecution of Falun Gong in China to people.”

He then talked to his friends about the CCP’s crimes of harvesting organs from living Falun Gong practitioners. “My classmates expressed their support for Falun Gong.”

Li went to China when he was four years old, but for the past 12 years he has not been able to visit China again because he and his mother practice Falun Gong. He hopes that he can soon visit there again.

He said, “I visited China when I was only four years old and I do not remember much about that visit. However, I have a good feeling about it. I have seen the photos. I hope I can go back to visit again soon.”

“How My Parents Survived Electrocution from a Power Line”