(Minghui.org) Falun Gong practitioners held a rally at Stephansplatz in Vienna on July 20, 2016. On the same day, a report about Falun Gong's resistance to the persecution in China was published on Oe24.at, the web version of Oesterreich, the largest newspaper in Austria. 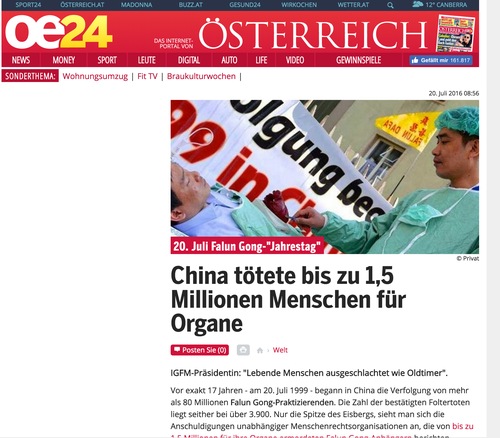 The report quoted Mrs. Katharina Grieb, President of the International Society for Human Rights Austria that organs had been harvested from living Falun Gong practitioners. Mr. Wang Yong, Chairman of the Austrian Falun Dafa Association, called it a new type of genocide.

The report mentioned the European Parliament was working on a written declaration regarding illicit organ harvesting practices in China.

The written declaration demands an independent investigation, and requires the European Parliament and the European Commission to take action to stop state-sanctioned organ harvesting in China, and urges all European Union countries to take a stand against the atrocities.

The report also introduced Falun Gong as a traditional Chinese cultivation practice with Truthfulness-Compassion-Forbearance as its principles. Falun Gong is practiced in over 100 countries. Jiang Zemin, the former head of the Communist Party, has had over 250,000 criminal complaints filed against him for his complicity in the persecution of Falun Gong.

“Sentenced to Prison for Their Faith, Seven Practitioners in Chaoyang City Attempt to Have Sentences Overturned”