(Minghui.org) Three independent investigators from Canada and the United States testified at a hearing on the state-sanctioned organ harvesting of prisoners of conscience in China, held by the European Parliament on June 29, 2016.

Canadian human right lawyer David Matas, Canadian former diplomat David Kilgour, and American reporter Ethan Gutmann presented the results from the latest investigations at the hearing. Based on the data from hundreds of hospitals in China since 2000, the investigators estimated that between 60,000 to 100,000 organ transplant surgeries are being conducted in China every year. 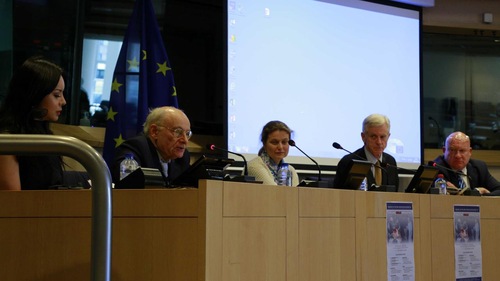 The hearing was initiated by Member of European Parliament (MEP) Louis Michel.

David Matas, who has been devoted to the investigations of the forced organ harvesting in China for years, called on the EU to do what they can to stop this atrocity.

According to Matas, the latest investigation concluded that the Chinese Communist Party has involved the entire nation in the mass killing. The majority of the victims are Falun Gong practitioners, and the rest include Uyghurs, Tibetans, and Christians. The communist regime is harvesting their organs for profit.

Ethan Gutmann, the author of The Slaughter, a book about the forced organ harvesting, said at the hearing that the EU passed a resolution in December 2013 urging China to stop the organ harvesting, but the EU should conduct further independent investigations. It is abnormal to kill one for saving another and Europe needs to take action, he said.

Gutmann said that the action must obtain support from the public. He suggested that the EU should make laws, as Taiwan did, to forbid traveling to China for organ transplants.

MEP Peter Liese from Germany believes that it is the EU's responsibility to stop forced organ harvesting in China. He called on his colleagues not to wait and to exert pressure on Beijing. He said that the MEP must make their voices heard, so that the MEP committees will listen.

Tomas Zdechovsky from Czech said his grandfather experienced the terrors of the communist party. He called upon the lawmakers not to give up the fight against tyranny. He said, if we want to change something, we must take action, and if we believe in success, we will succeed. If you fall asleep in democracy, then you could wake up in a dictatorship, he said.

Tunne Kelam, one of the sponsors of the EU resolution on organ harvesting, said this is important to everybody, not just to the MEPs. Such a crime can only happen under a dictatorship. He said it is the EU's responsibility to stop it, because many Europeans may go to China for organ transplants.

There is no excuse for this crime against humanity, Kelam said, and he called for independent investigations by the EP. He said they cannot ignore this crime because of economic relationship with China and should take it as their responsibility to stop this atrocity.

Miss World Canada 2015 Anastasia Lin also testified at the hearing. She briefly introduced Falun Gong as being distinct from tai chi or yoga; rather, it is an ancient cultivation practice and focuses on improving one's heart or character. Its practitioners follow the principles of Truthfulness-Compassion-Forbearance and try to be better people, she said. About 100 million Chinese joined the practice before 1999, at which point the Communist Party became threatened by Falun Gong's popularity and launched its brutal suppression of the group.

““Saving People” Should Be a Coordinator’s Top Priority”