(Minghui.org) Falun Gong practitioners held activities on Victoria Square in Adelaide, South Australia on July 16, 2016 to mark the 17th year of resisting the persecution in China.

They highlighted the Chinese regime's killing of practitioners for their organs and called for the public to support the criminal prosecution of Jiang Zemin, the former Chinese Communist Party (CCP) leader who initiated the violent persecution of Falun Gong. 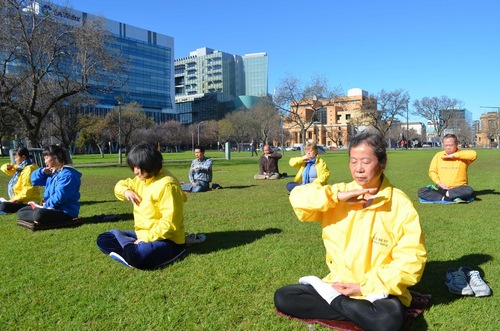 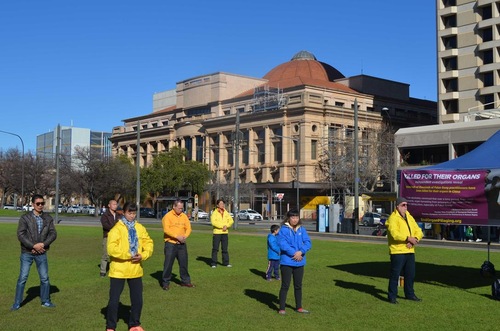 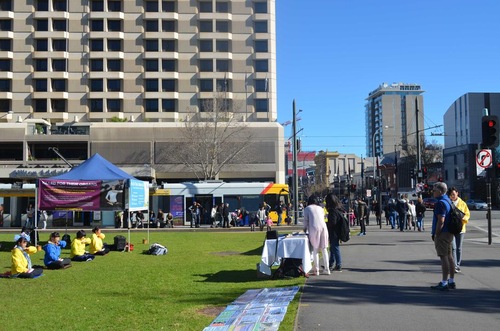 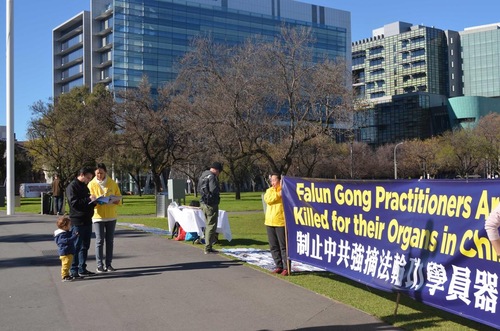 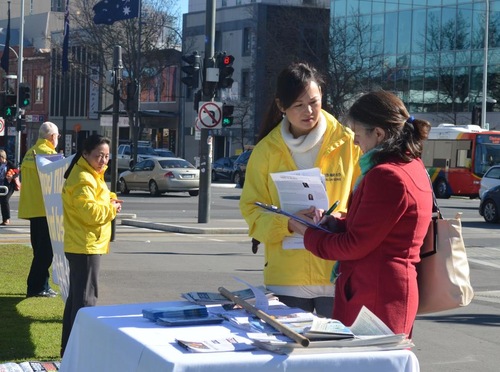 Passersby pause to watch the event and sign a petition supporting the prosecution of former Chinese leader Jiang Zemin.

Many locals go to Victoria Square in downtown Adelaide for shopping. The practitioners demonstrated the Falun Gong exercises. Drawn to their eye-catching yellow shirts and slow hand movements, many stopped to watch the exercise demonstration and posters with information about Falun Gong and the persecution in China. 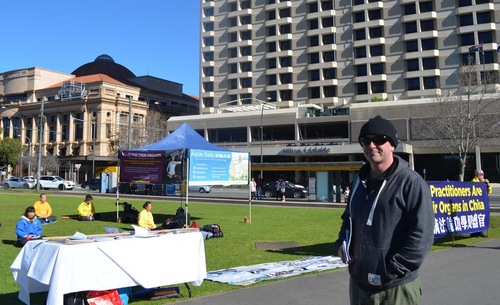 Gary, a local nurse, said, “I know people have no freedom of belief or speech in China. It is worrying. Such persecution must stop.” He said he is concerned about human rights in China and that it is important to let people know of the abuses still going on.

'Falun Gong Should Not Be Persecuted'

Ms. Zhu came to Australia five months ago to visit her son, who was studying in Australia. She said she accepted flyers from practitioners at a train station. “People practicing Falun Gong are good. I don't understand why they are persecuted,” she said.

Seeing so many people and posters on the square, she came forward to learn more. A practitioner told her, “The Party and Jiang are afraid of Falun Gong's principles–Truthfulness-Compassion-Forbearance, because it reflects the Communist Party's evil nature. The more people practicing Falun Gong, the bigger the contrast. The Party became paranoid and started the persecution.”

Ms. Zhu said she knew well about the Party's means of suppressing dissidents. She happily agreed to withdraw her membership in Party organizations and said with a smile, “I'll come to learn Falun Gong with you next week.”

Qiao, a Chinese student, quietly read the posters. A practitioner talked with her for quite a while and said, “Falun Gong teaches people to follow Truthfulness-Compassion-Forbearance. The CCP spreads lies about Falun Gong and instigates hatred toward practitioners. Truthfulness-Compassion-Forbearance is rooted in Chinese traditional culture. The Party tries to destroy traditional culture. It commits crimes against humanity in the persecution.”

Qiao decided to withdraw from the Communist Youth League on the spot. She said, “Falun Gong should not be persecuted.”

“Activities in New Zealand Mark 17 Years of Resistance to Persecution”

““I Have No Words”–Art Exhibition Moves Viewers in São Paulo, Brazil”