(Minghui.org) Today's news from China includes incidents of persecution that took place in 11 cities or counties in 8 provinces. According to this report, 4 Falun Gong practitioners were subjected to mistreatment during their detention, and at least 3 were illegally arrested. 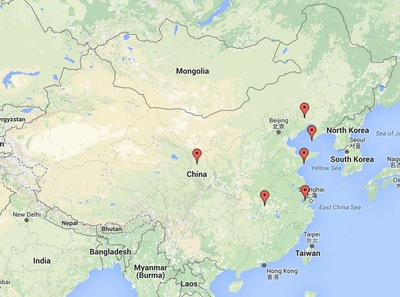 Mr. Qiao Jianjun was arrested in Wenshui County, Shanxi Province, on July 15, 2012. He was sentenced to four years in prison by the Wenshui County Court and taken to the Jinzhong Prison. When his prison term was about to end in 2016, he was taken into custody by the Xinjiang Police Department.

Ms. Nan Tianju and her non-practitioner husband were arrested at home in Hengdian, Huangpi District, by officers from the Hengdian Police Station on the morning of June 29, 2016. They were taken to the police station, and released an hour later.

Mr. Lin Xiaofeng was arrested at the computer store he owns by officers from the Shihe Town Police Station on the morning of June 28, 2016. The officers confiscated three computers. He was released that morning.

Ms. Yin Xiuzhi from Jianping County has been held in custody for nearly eight months. She went on a hunger strike to protest the persecution and was force-fed. She became very weak. She was transferred from the Panjin City Detention Center to the Chaoyang City Detention Center in her home town.

The Jianping County Court sentenced her to seven years in prison and fined her 20,000 yuan. She appealed to the Chaoyang City Intermediate Court. She was tried a second time by the Xidayingzi Criminal Adjudication Tribunal on the morning of June 30, 2016.

Ms. Li Honglei, was arrested on June 5 for visiting an arrested practitioner’s home. Her husband and mother-in-law were arrested hours later when they went to the police station seeking her release.

Ms. Li’s daughter, Ms. Huang Ruying, received a call from her aunt and rushed home from out of town. She arrived on the next day and found police ransacking her parents home. Ms. Huang was arrested and taken to the Pudong Detention Center, where her mother is being held.

The family's lawyers tried to visit them on July 7, but were turned away by police.

Ms. Hu Yanxia’s case was submitted to the Qiaoxi District Court on October 12, 2015. They claimed that Ms. Hu helped purchase calendar holders for Falun Gong calendars. Her lawyer pleaded not guilty and demanded her release. However, the court illegally sentenced her to three years’ imprisonment on the morning of July 6, 2016. Ms. Hu plans to file an appeal with the Shijiazhuang Intermediate Court.

Ms. Ye Jinyue was arrested on March 15, 2016 and is being held at the Sanmen Detention Center. The police has fabricated information in the case file and submitted her case to the local procuratorate on June 21.

The court tried Mr. Tang on July 5, 2016. There were only three members from Mr. Tang’s family that were allowed to attend the hearing. The court was filled by people arranged by the court.

His two lawyers refuted every evidence submitted by the police and procuratorate. However, the judge still sentenced Mr. Tang to three years of imprisonment.

Two weeks before the trial, Mr. Tang’s wife received a call from a distant relative of his, who said that the court passed a message that his case could be settled in private as long as she would pay the judge 10,000 yuan. Mr. Tang’s wife said their family was too poor to pay the judge.

The Xintai Court sentenced Mr. Cao Yuguang and his wife Ms. Li Qin each to 10 years of imprisonment at the beginning of 2016. They filed an appeal and the Taian Intermediate’s Court sent their cases back to the Xintai Court for a new trial.

The court tried the couple on May 24 and announced on June 29 that it would uphold the original verdict. The couple has appealed to the Taian Intermediate’s Court again.

“Master Protects Us During Tribulations”