(Minghui.org) Over 200,000 Falun Gong practitioners in China have filed criminal complaints since May 2015 against former Chinese dictator Jiang Zemin, for launching the persecution of Falun Gong. In two Weifang City suburbs, over 7,000 people signed complaints against Jiang since November 2015. 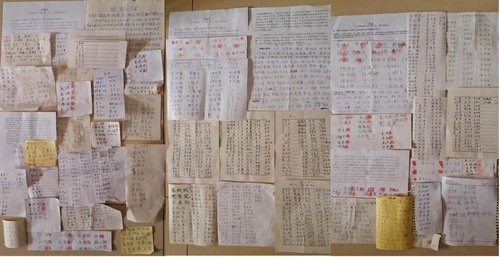 Some of the signed petitions from Weifang City

One citizen said, “The Constitution clearly specifies that people have freedom of belief. But Jiang Zemin did not care and just went ahead with the persecution of Falun Gong practitioners, without hesitation.”

Another person said: “Jiang Zemin tricked many Chinese people into participating in the persecution of Falun Gong. He forced all citizens to commit crimes. Clear-minded people are now signing complaints against him as a way of redemption. All good people should stand up and file charges against him.”

Under his personal direction, the Communist regime established an extralegal security organization, the 610 Office, on June 10, 1999. This organization overrides police forces and the judicial system in carrying out Jiang's directive regarding Falun Gong: to ruin their reputations, cut off their financial resources, and destroy them physically.

“My Cultivation Experience from Kindergarten to 4th Grade”