From Ridicule to Respect: A Change in Chinese Tourists in Paris, France

(Minghui.org) Ms. Jun sets up posters near the Eiffel Tower every day to raise awareness of the persecution of Falun Gong [also known as Falun Dafa] by the communist regime in China.

She comes across many tourists from China each day. Many of them, after talking to her, understand what the persecution is about and thank her for her efforts. Occasionally, some who had been misled by the Chinese regime’s propaganda against Falun Gong would verbally abuse her. Ms. Jun would remain calm and polite, and her friendly gestures soften their attitude. They eventually listened to her and treated her with respect. 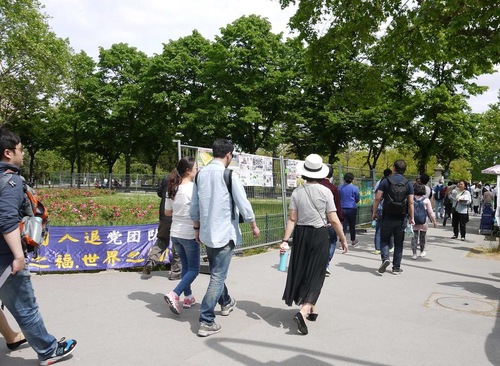 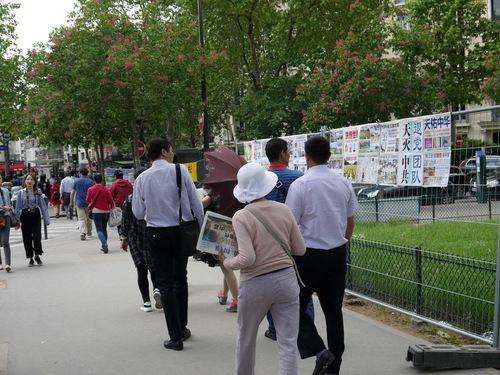 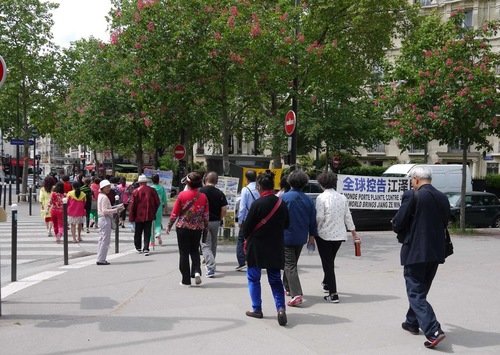 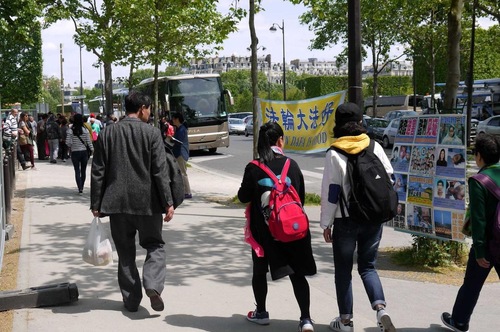 Posters and banners near Eiffel Tower

From Insults and Ridicule to Praise

Ms. Jun tried to talk to a group of Chinese tourists one day. They refused to listen, ridiculed her, and got on the bus. Before they left, Ms. Jun waved goodbye and said, “Stay safe. If you remember 'Falun Dafa is good,' it will bring you and your family good fortune.”

The same group came back to the Eiffel Tower the next day, and Ms. Jun didn’t hesitate to talk to them about Falun Gong again. One of them said to her, “You still want to talk to us? We made fun of you yesterday. Aren’t you upset?” She replied, “No, we practice ‘Truthfulness-Compassion-Forbearance.’ I just wanted to let you know about the practitioners in China who are being persecuted.”

The tourist told her that they didn’t think that she would be there because of what they did to her the day before. “When you told us to stay safe and wished us good fortune after we got on the bus, we felt bad. We thought you, a Falun Gong practitioner, were quite awesome because you weren't angered by our words.”

Six of them listened to Ms. Jun and quit the Chinese Communist Party (CCP) and its youth organizations, to show their disapproval of the regime’s decision to persecute Falun Gong.

Another time, Ms. Jun tried to talk to a group of tourists about quitting the Chinese Communist Party, in light of the crimes committed by the regime.

One of them disputed, “We believe in the CCP. Why should we quit?” Ms. Jun explained to them that over 80 million Chinese people died unnatural deaths after the CCP took power in 1949. “You don’t want to be part of the CCP and devote your life to it as you swore you would when you joined the Party,” she replied.

When Ms. Jun talked about the “Self-immolation hoax on Tiananmen Square” in 2001, a Chinese tourist interrupted her. “Please let me speak for you,” the woman said. “As I repeatedly watched that so-called news in 2001, I suspected that it was staged by the CCP.”

She said she was a firefighter and that “a fire blanket is so heavy that it couldn’t have been thrown easily in the air before it landed on the person on fire. Also, the person couldn’t have stayed sitting up if that heavy blanket landed on him. It would push him down. Thirdly, the blanket seemed to appear right after the person was done shouting. The perfect timing just made it seem rehearsed. I couldn’t convince myself that things just happened that way. The CCP staged it to frame Falun Gong.”

Ms. Jun agreed and added, “Exactly. Also, his hair and the plastic bottle in his lap remained untouched, but his face and clothes were badly burned after the fire was put out. It was not possible.”

At that moment, other tourists told Ms. Jun that they were convinced. About 20 of them quit the CCP and its youth organizations.