(Minghui.org) It was a fine spring day in Hamburg, Germany, and the downtown area was swarming with tourists and local residents, as usual. Next to Reesendammbruecke, a tourist site more than 150 years old, Falun Gong practitioners set up a booth to raise awareness about the persecution in China, especially the organ harvesting from living Falun Gong practitioners.

Seeing the mock operating table, one young man stopped to find out what had happened. After reading a poster nearby, provided by practitioners, he was astonished, “Really?! Is this actually happening in China?” After talking with one practitioner and learning about investigations by many third party organizations which have confirmed the atrocity, his expression went grim. In the end, he thanked the practitioner and encouraged him, “Please keep up good work. This is an important issue, and you must tell more people about it.”

Three teenaged girls walking past the booth were also drawn by the posters and banners. They said they had heard about the suppression in the past, and asked one practitioner why no officials had stopped such crimes. After the practitioner told them that the brutality was a nationwide suppression driven by the totalitarian Communist Party regime in China, the girls were disturbed by the cruelty, and said they would tell more people about it. 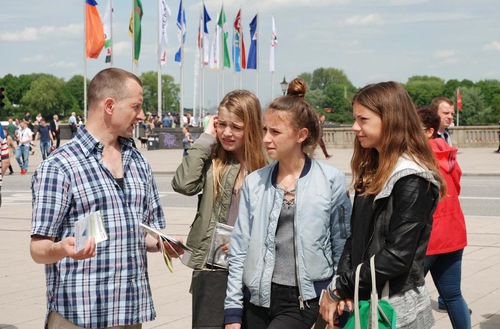 Many passersby were surprised to hear that the systematic persecution of Falun Gong has been ongoing for 17 years.

Jack and Emily, a couple from England currently working in Hamburg, saw the practitioners' booth on the way to the Alster Lake with their friends. Although they had heard about the persecution in China previously from their friends, the vivid picture on the posters nonetheless shocked them. Both signed petitions calling to rescue local resident Ye Xiaojun's mother, Ms. Ye Julan. 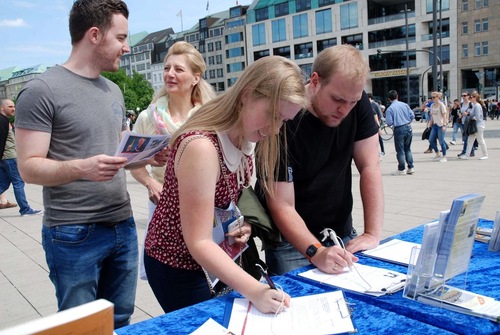 Like many other residents and tourists, Jack and Emily signed petitions to support Falun Gong practitioners.

Ms. Ye, 68, was arrested at home by Shanghai police in December 2014, and has since been detained. Putuo District Court sentenced her to a three-year prison term in May 2015. When Han Zheng, Party secretary of Shanghai, a sister city of Hamburg, visited Germany in early June 2015, several German news media reported on efforts by Falun Gong practitioners urging Ms. Ye’s release.

“A Great Mission to Be Accomplished”