(Minghui.org) German media reported on the persecution of Falun Gong during the visit of a senior Chinese Communist Party (CCP) official, profiling a local Falun Gong practitioner in Hamburg. Han Zheng, CCP Secretary of Shanghai, a sister city of Hamburg, was in Germany from June 1 to 4.

Hamburg-based Norddeutscher Rundfunk (NDR) (North German Broadcasting), a public radio and television broadcaster, covered the story of Ms. Zhou Yake, a Hamburg resident, and her mother-in-law in China. Ms. Ye Julan was arrested at home at the end of 2014 and illegally sentenced to three years in prison by a Shanghai court for distributing informational materials about the 16-year persecution of Falun Gong. NDR ran an interview with Ms. Zhou and reported Ms. Ye's current situation and the family's concerns for her safety.

Print media Morgenpost and Wochenblatt also covered the story, reporting the health benefits Ms. Zhou derived from practicing Falun Gong and the family's worries that Ms. Ye might become a victim in the CCP's state-sponsored practice of killing prisoners of conscience for their organs.

Han Zheng and his delegation encountered protests by Falun Gong practitioners in Hamburg and Berlin. Practitioners exposed the Chinese regime's brutal suppression of the peaceful meditation practice and demanded that Jiang Zemin, the chief culprit of the persecution and former head of the CCP, be held accountable for his crimes. 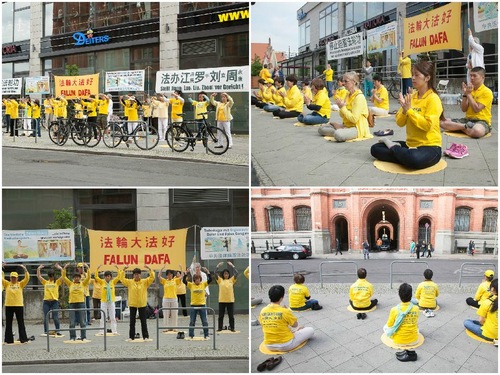 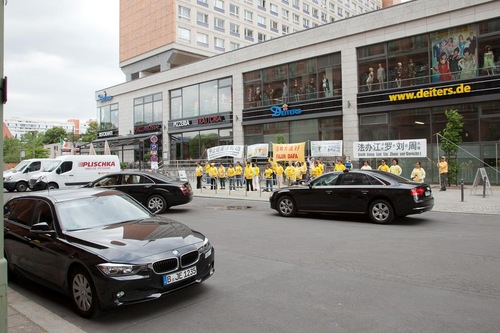 Han Zheng's motorcade passed Falun Gong practitioners on June 3, 2015, near the Berlin City Hall, where Han and the mayor of Berlin met for an informal meeting. 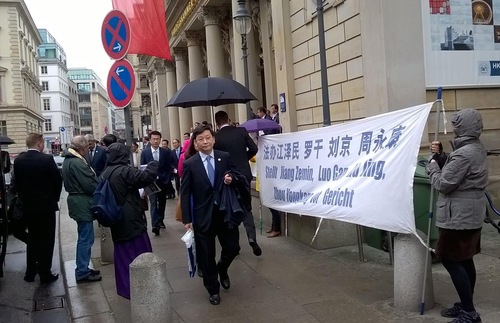 Chinese delegation members walk by practitioners' banner outside of the Hamburg Chamber of Commerce on June 2, 2015. The banner demands that Jiang Zemin, chief culprit of the persecution, be brought to justice.

“How Jiang Zemin Abused His Power to Persecute Falun Gong”