(Minghui.org) Practitioners of Falun Gong (also known as Falun Dafa) held banners reading “Falun Dafa is Great” and “Bring Jiang Zemin to Justice” on the sidewalk of Connecticut Avenue in Washington, D.C. on March 31, 2016, while Chinese President Xi Jinping participated in the Nuclear Security Summit and met with President Obama. Xi also attended a dinner with over 50 world leaders who also participated in the summit.

Crowds of people lined the main roads near the Omni Shoreham Hotel where Xi was staying. Practitioners held banners and demonstrated the Falun Gong exercises on Connecticut Avenue from 8:00 a.m. to 8:00 p.m. on Wednesday and Thursday. The serene scene caught the attention of many people, including the Chinese group that was paid to welcome Xi. They took photos of the practitioners, and some imitated the hand gestures of the practitioners doing the exercises. 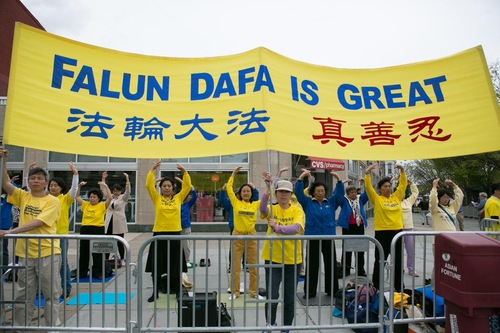 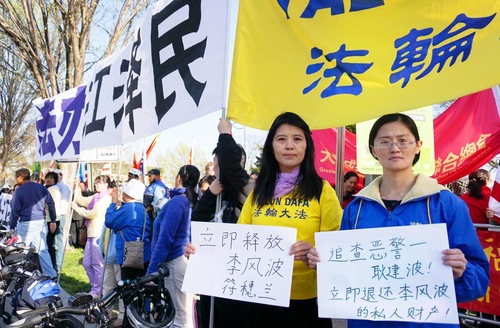 Two women call for the immediate release of practitioners Li Fengbo and Fu Huilan, who are detained in Lishui, Zhejiang Province.

Practitioner Ms. Xu held a banner reading “Bring Jiang Zemin to Justice.” She said her mother Wang Sirong was arrested on February 13, and has been detained in Tianjin’s Nankai Detention Center along with three other practitioners. She is calling for their immediate release.

Practitioner Ms. Fan said, “The persecution of Falun Gong is ongoing. We cannot keep silent.” She works in a federal agency and came to the protest venue to call for the release of two practitioners detained in Lishui, Zhejiang Province. She said she received a call a few days ago from a Chinese resident in Maryland, whose friend Li Lan in Hengyang, Hunan called her for help.

Li's daughter Li Fengbo and another practitioner, Fu Huilan, were arrested on a highway in Lishui, Zhejiang on March 30. Police officer Geng Jianbo raided Li Fengbo's home without her presence, and seized her car, bank cards, cash, jewelry, along with a printer, copier, and other personal belongings valued at over 1.5 million yuan (~$230,000 USD).

Of those paid to welcome Xi, many got their first glimpse of practitioners doing the Falun Gong exercises. One elderly man learned the exercises on the spot. Several students recorded videos.

Practitioner Chunying Wang said, “Over 20 Chinese people wearing red vests took a break on the lawn across from the National Air and Space Museum. It was close to a Falun Gong booth that was broadcasting information about the Chinese regime's harvesting of organs from living practitioners. They were shocked upon hearing it. Some practitioners further explained the persecution to them. Over ten of the Chinese people agreed to quit their memberships in the Chinese Communist Party and its affiliated organizations.”

Practitioner Mr. Zou, who works in D.C. and participated in the event, said, “The Chinese Embassy spent lots of money to hire these people to welcome Xi. It's a rare opportunity for them. They get the chance to see people doing the Falun Gong exercises and learn about Falun Gong. The majority of them are kindhearted, but were misled by the CCP's propaganda defaming Falun Gong. Over the past couple of days, they've become aware of the persecution.”

“Understanding the Illusion of Sickness Karma”