(Minghui.org) Nearly 1,000 Falun Gong practitioners joined a large rally following a march in Flushing, New York City on April 23. Both events commemorated a peaceful protest in Beijing on April 25, 1999, about three months before the communist regime launched its brutal persecution of Falun Gong in China.

With banners reading “Falun Dafa is Good,” “Bring Jiang Zemin to Justice,” and “Quit the CCP,” the event drew much attention from the public. Since last May, more than 200,000 criminal complaints have been filed with China's highest court against the former Communist Party leader Jiang Zemin for ordering the campaign against Falun Gong that has lasted 17 years.

The rally began with a performance by the Divine Land Marching Band. Zhang Erping, spokesperson for the Falun Dafa Information Center, recalled the peaceful appeal of April 25, 1999.

“The peace and compassion of the event represent Falun Gong practitioners' firm belief in the principles of Truthfulness-Compassion-Forbearance. We are proud of what they did, because, by doing so, they are safeguarding the core values of Chinese civilization, something closely related to the most fundamental principles of mankind,” he said.

Zhang hopes that more people will join the practitioners' effort to end the perscution in China. “By safeguarding our conscience, we will bring a better future to ourselves, to China, and to the world,” he said. 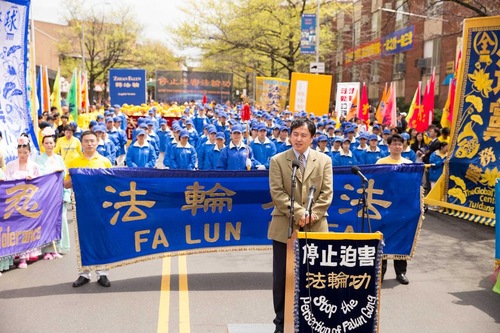 Yao Jie, an assistant of a Falun Gong group exercise site in Beijing before the persecution began, attended the appeal in 1999. Officials charged her with “attacking Zhongnanhai” (the central government compound) in December 1999 and sentenced her to seven years of imprisonment.

Currently living in the United States, Yao recalled why she and other practitioners went to appeal in Beijing. “After a Tianjin City magazine defamed Falun Gong, some practitioners went to the publisher for clarification, but they were met with riot police; 45 practitioners were arrested for no reason.” Because their rights were deprived in Tianjin, the only option—as allowed by the law—was to go to Beijing and appeal to higher officials.

At about 8:00 pm on April 25, 1999, upon hearing that their request had been addressed, all the practitioners left the site within half an hour. “They also voluntarily cleaned up the site, even picking up cigarette butts left by police officers,” Yao said.

While outsiders were impressed by the practitioners' calm and rational manner throughout the process, Yao said it was the principles of Falun Gong–Truthfulness, Compassion, and Forbearance–that shaped practitioners' high moral character.

'Everyone Is Taking a Stance'

Li Tianxiao, a political analyst at the political science department of Columbia University, said the Chinese Communist Party (CCP) has exhausted all means in the past 17 years to attack Falun Gong but did not succeed.

“The reason lies in the principles of Falun Gong. Because Truthfulness-Compassion-Forbearance represents virtue and the common good, anyone who challenges them is doomed to fail,” commented Li.

The regime escalated the nationwide suppression campaign and has even harvested organs from living Falun Gong practitioners incarcerated for their faith. “In the beginning, we thought only very few hospitals were involved. Now we know the situation is much worse than what we had thought. Thousands of cases, or tens of thousands of cases–the number is much higher than what we had imagined,” explained Damon Noto, spokesperson for Doctors Against Forced Organ Harvesting (DAFOH). 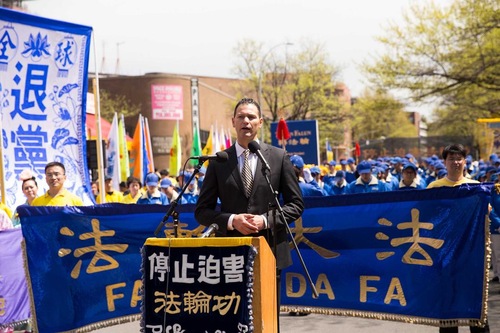 Damon Noto from Doctors Against Forced Organ Harvesting (DAFOH) tells audience of the Chinese regime's harvesting of organs from livign practitioners in China.

Wang Zhiyuan, spokesperson for World Organization to Investigate the Persecution of Falun Gong (WOIPFG), said that, because of the regime's brutality during the persecution of Falun Gong and its previous political campaigns, everyone is taking a stance in front of this critical issue, and that any hope placed in the CCP will lead to nowhere.

Quitting CCP 'Only Way Out'

The majority of Chinese have been, or used to be, affiliated with the Communist Party. Other than the Party itself, most teenagers and young children are required to join the CCP's Youth League and Young Pioneers organizations.

Yu Chunguang, a former high school English teacher from Guangdong Province, said the Party had effectively brainwashed several generations of Chinese people. “It was the Nine Commentaries on the Communist Party that helped me to understand what the CCP is, and how it defamed Falun Gong and persecuted practitioners so badly.”

Two resolutions recently passed by the Foreign Affairs Committee of the U.S. House of Representatives, H.R.1150 and H.R.3694, gave support for the freedom of religion and condemned organ trafficking. Both resolutions are connected with the ongoing human rights abuses in China.

“When I traveled to Washington D.C. last month, I met a group of Chinese who were paid to 'welcome' visiting Chinese leaders. I cannot imagine why these people would sell their dignity in exchange for 80 yuan,” said Yu.

According to Yi Rong, president of the Global Service Center for Quitting the CCP, more than 230 million people have separated themselves from the CCP and its youth organizations. 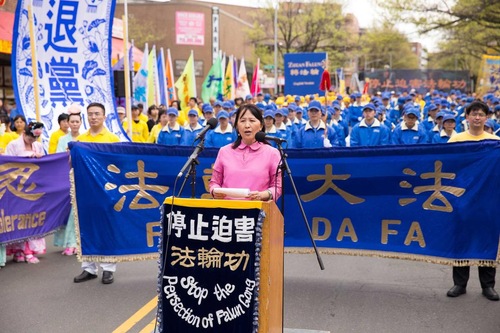 Yi Rong, president of the Global Service Center for Quitting the CCP, said over 230 million Chinese have separated themselves from the CCP organizations.

“By separating themselves from the Communist Party, people will have a clearer understanding of themselves and society. All these will lead to a higher moral level in society,” remarked David Tompkins, a contact person for the service center.

Many pedestrians stopped to learn about Falun Gong and the persecution, including those working at nearby restaurants and stores.

Some of them told practitioners that they wanted to quit the Chinese Communist Party. Wu, a tourist visiting the United States for the first time, said he had watched videos of Falun Gong activities previously. “But this rally is much better than what I saw on the computer,” he said.

Excited by the practitioners' march and rally, Wu said he felt bad for Chinese people, since “we hardly have a place to speak what we really think back in China.” He said he would tell others about Falun Gong upon returning to China.

Martha Flores-Vazquez, a community leader in Flushing, said she was proud of Falun Gong practitioners for what they have done for the community and society. “It requires all of us to maintain a safe and peaceful society with justice,” she said.

“Seventeen years of persecution is too long,” she added. “We must stop it.” 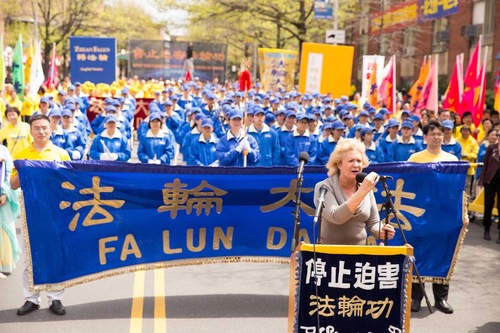