A Falun Dafa practitioner put two posters about suing Jiang Zemin on a street before the Chinese New Year. One month later, he saw that the posters remained intact. 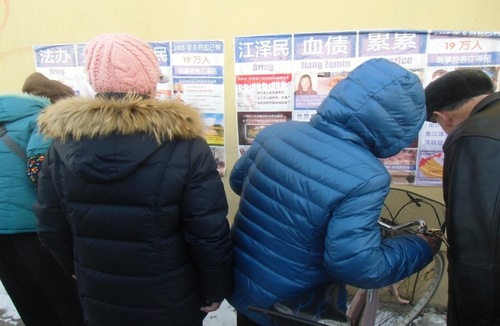 Officer: It’s 'None of Our Business'

A practitioner was putting up these posters next to a police station when a police officer came by. The practitioner remained calm. The officer said, “You're doing this right outside our door? Why don't you do it over there. Keep a distance from us.”

“Our chief told us not to do bad things [against Falun Gong practitioners] any longer,” he added. “So what you do is none of our business.”

A few practitioners went to a large, crowded market in Jiangbei District one morning and hung two large posters in a conspicuous place.

An elderly man came over and said in a harsh tone, “How dare you post such things! It's against the law.” One of the practitioners looked at him and said calmly, “Why don't you read it first—then you'll know who's breaking the law. Jiang Zemin is a traitor to our country. He persecutes Falun Gong and has committed all sorts of atrocities.”

The man then moved closer to the poster and began reading.