(Minghui.org) Falun Gong practitioners held a rally across from the Chinese Embassy in Stockholm, Sweden to commemorate the 17th anniversary of the April 25 peaceful protest on the morning of April 23, 2016. They held up banners reading “Stop the Persecution of Falun Gong” and “Bring Jiang Zemin to Justice.” They held an exercise demonstration and talked to people about Falun Gong and the persecution in China. 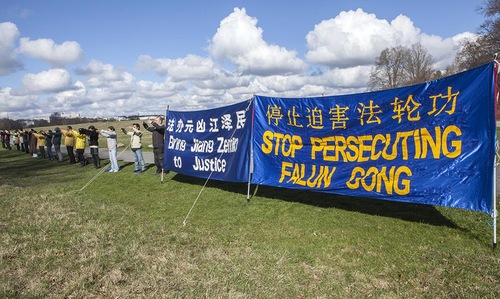 Falun Gong practitioners rally across from the Chinese Embassy in Stockholm

Over 10,000 Falun Gong practitioners went to the Beijing State Appeals Office to request the government to release 45 practitioners arrested in Tianjin on April 25, 1999. They also requested legal publication of the Falun Gong books and a peaceful environment to practice Falun Gong. The peaceful event won recognition across the world.

Practitioner Li from Beijing, who was at the original protest, said, “The Chinese Communist Party (CCP) switched right and wrong after April 25, 1999 and initiated the persecution of Falun Gong. The persecution has been going on for 17 years. Over 200,000 Falun Gong practitioners and their family members have filed criminal complaints against Jiang Zemin with the Supreme People's Procuratorate and the Supreme People's Court for his crimes in the persecution. Over 230 million people have withdrawn their membership from the Party and its affiliated organizations. The disintegration of the CCP is inevitable.” 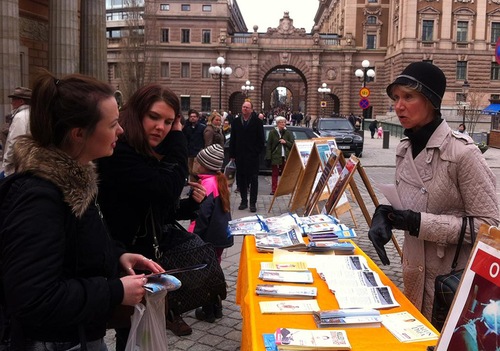 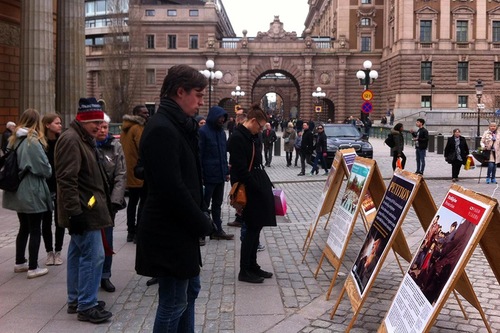 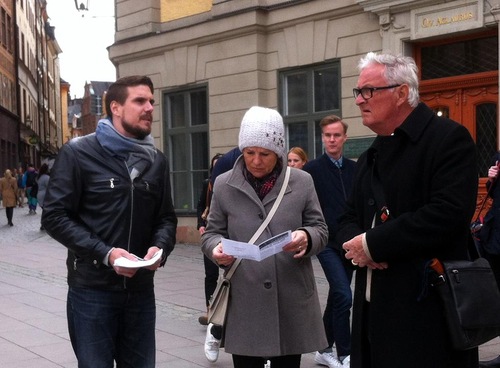 Falun Gong practitioners went to Coin Square, the busiest business area in Stockholm. They did the exercises, set up posters with Falun Gong information, and talked with passersby about the practice and the CCP's persecution and live organ harvesting from practitioners. Many people paused to read the posters and learn about the persecution in China.

A couple from the Netherlands accepted a flyer. The lady works in Amnesty International. She said that she had known about the CCP's persecution and live organ harvesting. She indicated that she would continue to help the practitioner victims.

A man from Russia stood in front of the posters for quite a while. He asked many questions about the practice and the persecution. He said that he would like to help stop the persecution.

“Torture Victim from Jingmen City Arrested Again for His Belief”