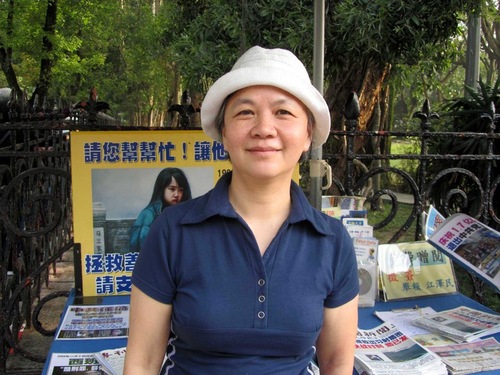 When Ms. Luo heard about Falun Gong more than 12 years ago she did not realize how precious it is. She gained a new understanding of Falun Gong after watching the Shen Yun performance four years ago.

She felt fortunate that she was given the opportunity to practice Falun Gong, because she became healthy and changed her attitude toward life.

“I will dearly treasure Falun Gong,” she said. “Whenever I think that Master, the founder of Falun Gong didn't give up on me and gave me a new life, I can't stop breaking out in tears of gratitude!”

Born as a premature baby, Ms. Luo was sickly from day one. Her allergies made her lose sleep at night and blisters on her tongue hurt, which made it difficult to eat. Chinese and Western medication and treatments only gave temporary relief.

Ms. Luo received a Falun Gong flyer in her mailbox in 2003, but she thought that it was just an exercise. Instead, in 2006 she took up a qigong practice that advertises that it treats diseases.

She experienced many tribulations. Her mother became brain-dead after surgery. Her father passed away from cancer. She was diagnosed with breast cancer, and besides chemotherapy had surgery in 2011. She lost all hope.

A Falun Gong practitioner recommended that she get a ticket for the Shen Yun performance in February 2013. She was deeply touched from the beginning of the performance and could not stop crying throughout the show.

Soon after, she participated in a nine-day Falun Gong workshop to learn the exercises and attended a Fa-study group. She said, “Every time I watched the nine-day lecture video series, I felt that I was purified.”

She wanted people to know about this cultivation practice and thus participated in clarifying the facts of Falun Gong activities.

“Its exactly as it is described in Zhuan Falun, the main book of Falun Gong,” she said. “During our group exercises, I saw the practice site enveloped in red light. Words can't describe what I saw!”

She continued, “I found that doing the exercises with a group had a better effect than having my health problems treated! It has been four years since I started practicing Falun Gong. I no longer experience any of my former health issues and haven't taken any medication. I'm no pessimistic anymore. I'm filled with hope, and enjoy a healthy and fulfilling life.” 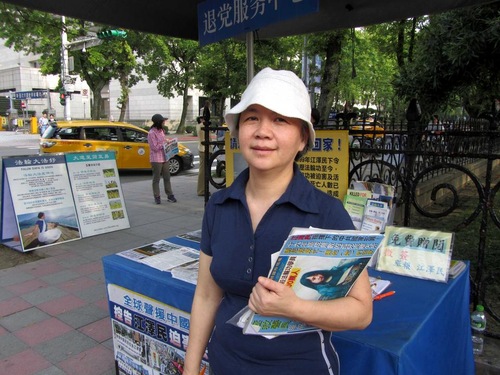 Meihua clarifies facts of Falun Gong to tourists from China at a tourist attraction site.

Rain or shine, Ms. Luo talks to tourists from mainland China about Falun Gong and helps them quit the Chinese Communist Party and its affiliates every weekend. She also takes every opportunity to tell people in her area about Falun Gong.

When she was eating in a restaurant, the owner told her that his wife came from the mainland and was against Falun Gong because of the Party's propaganda. She told the owner's wife about her recovery from a life threatening illness after she practiced Falun Gong, pointed out the inconsistencies in the self-immolation propaganda stunt, and shared details about the Communist Party's crime of harvesting organs from living practitioners. The owner's wife was deeply touched by the facts and quit two Party organizations: the Young Pioneers and the Youth League.

“Master saved my life! I'm so fortunate compared to the people who are deceived by the Party. I will continue to tell people about Falun Gong and read the books.”

“Daughter Arrested for Trying to Rescue Her Father”