(Minghui.org) Today's news from China includes incidents of persecution that took place in 13 cities or counties in 9 provinces. According to this report, 1 Falun Gong practitioner was subjected to mistreatment during their detention, and at least 20 were illegally arrested. One practitioner seeking to mail letters of complaint regarding Jiang Zemin to the Supreme People's Procuratorate and the Supreme Court has been imprisoned. 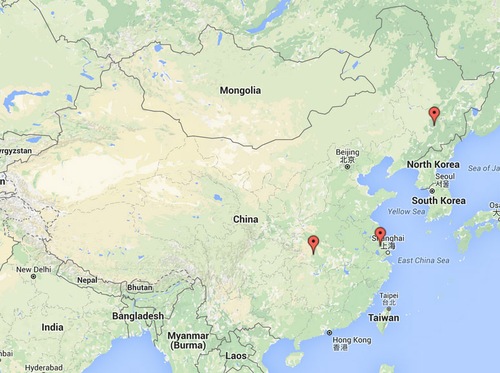 Ms. Peng Yaxin was arrested on March 13, 2016, for distributing informational materials about the persecution of Falun Gong. She is detained at the Shayang Detention Center.

Five practitioners were arrested by officers from the Jinfeng Police Station on March 30, 2016, for distributing informational materials about the persecution of Falun Gong. They are Ms. Chang Zheng, Mr. Du Yongwei, Ms. Xuan, Ms. Lu Linmei, and Ms. Qin Ying.

Mr. Du is detained at the Xieqiao Police Station in Zhangjiagang City and the whereabouts of the other four are unknown.

Ms. Wang Junjie was arrested on August 27, 2015, for suing Jiang Zemin, the former Chinese dictator. She was detained at the Jilin City Detention Center.

She was sentenced to a three and a half year prison term by Jiaohe City Court on December 14, 2015. She was taken to Changchun Women's Prison on March 23, 2016.

Mr. Zhong Chongbin was tried on March 22, 2016 without the presence of his lawyer or family.

Mr. Zhong was arrested on June 12 last year after filing a lawsuit against Jiang Zemin and holding the former Chinese dictator responsible for launching the persecution of Falun Gong that resulted in his repeated arrests and detention.

The local judicial bureau officials threatened the defense lawyer to stop representing Mr. Zhong a few days before the trial. They also intentionally misled the lawyer and told him that the trial would be on March 23.

The lawyer went to the detention center on March 22 to inform Mr. Zhong of what happened, but the guards said his client was to be immediately taken to the courthouse.

Unable to see his client, the lawyer rushed to contact Mr. Zhong's family, but he wasn't able to get ahold of them in a timely manner. By the time the family got to the courthouse, the trial was already concluded.

Two local women were tried on March 25 for refusing to give up their faith in Falun Gong. Two human rights lawyers entered a not guilty plea for them.

Ms. Zhang Xiaoling and Ms. Li Yifeng were arrested on December 8 last year. Their two lawyers, Mr. Zhang Zanning and Mr. Liu Zhengqing, both emphasized that the persecution of Falun Gong was illegal from the beginning as there has never been any law that criminalizes the practice in the first place. As such, their clients should have never been prosecuted for their faith.

The courthouse was heavily guarded and only six family members of the two women were allowed to attend the trial. Mr. Zhang's mother was barred from going inside.

It is not clear when the judge will issue a verdict. The two women remain detained.

Ms. Cai Suping was sentenced to eight months on March 25, 2016 for talking to people about the persecution of Falun Gong.

She was arrested on August 26, 2015 and went through three hearings in the next few months. The judge gave her an eight month prison term at the latest trial in March. Considering the time she has already served, she should be released home on April 7.

Ms. Zhao Junfang was tried on March 29 for distributing desk calendars which had information about the persecution of Falun Gong.

A veteran physician, Ms. Zhao testified, explaining why she never shied away from informing the public of the illegality of the persecution. She used to suffer from depression and other health problems, but quickly recovered after she started to practice Falun Gong. What she and millions of other practitioners did and still do are simply exercising their constitutional right to freedom of belief.

Her lawyer followed up saying that there has never been any law that criminalizes Falun Gong; hence his client should never have been prosecuted in the first place.

The judge didn't insist when Ms. Zhao refused to sign the court proceedings at the end.

Mr. Hu Yugen was tried on March 29 for refusing to give up his faith in Falun Gong, a spiritual discipline being persecuted by the Chinese communist regime.

Mr. Hu and his wife Ms. Yang Guifang were arrested on November 4, 2015. The police ransacked their home and confiscated more than 10,000 yuan in cash, bank deposits, and other valuables. Mr. Hu is still detained. Ms. Yang was released several weeks later.

Ms. Liu Jingyu has been transferred to Liaoning Women's Prison on March 29, after the local higher court issued a decision to uphold her four-year sentence for practicing Falun Gong.

Prior to her latest arrest on July 8, 2015 that led to her imprisonment, Ms. Liu was repeatedly harassed and detained for refusing to give up her faith

The police first arrested her on September 9, 2009 and kept harassing her at home after releasing her 10 days later.

Wang Xin, the local street committee director, came to her home many times in early 2015, trying to pressure her to write statements to give up her practice of Falun Gong. She firmly refused to comply with his demand.

Ms. Liu mailed out her criminal complaint against Jiang Zemin on June 17, 2015, accusing the former Chinese dictator of launching the persecution of Falun Gong that resulted in her harassment and detention. She was arrested a few weeks later and sentenced to prison on December 26.

Four locals were tried over the course of two days for their faith in Falun Gong.

Ms. Wang Xiaoying was tried on March 31 of this year. Both she and her lawyer pointed out that there has never been any law that criminalizes Falun Gong; hence the persecution is illegal from the onset. Presiding judge Li Jiawen ordered the court bailiffs to remove an elderly man from the room when he applauded the defense arguments.

Chen Xihai, Gao Yan, and Ju Zaiping were tried by the same judge the next day. They also testified how Falun Gong changed them for the better and their lawyers emphasized that they broke no law by exercising their constitutional right to freedom of belief.

Ms. Zhao Yanmin was arrested on November 4, 2015. She has been held at the Harqin Detention Center. The Harqin Court secretly tried her on February 25, 2016, without notifying her lawyer.

Mr. Jia Pengfei was sentenced to four years on September 29, 2015 for refusing to give up his faith in Falun Gong. His mother requested an open hearing in the appeal process, but was turned down by Judge Xu from the Zhangjiakou City Intermediate Court.

Mr. Jia's mother filed a complaint to Shijiazhuang Court against the Zhangjiakou City Intermediate Court. She also mailed another copy of her complaint to the State Appeals Office.

It is has been reported that Mr. Shao Minggang has been sentenced to six years for refusing to give up his faith in Falun Gong.

Mr. Shao's blood pressure shot to a dangerously high level after he was arrested on March 4 this year, but the police pressured the local detention center to admit him anyway. He was very still weak when he was tried on March 16.

Prior to his latest arrest, Mr. Shao was arrested three times in the past for his faith. He was forced to leave home to avoid further arrest after being released on medical parole in late 2014, but he was seized again this March, two days before the 2016 National People's Congress was set to convene.

Mr. Shao remains at Jinzhou Detention Center at the time of writing. His family is extremely concerned about his well being given his high blood pressure.