(Minghui.org) Since the end of May 2015, over 200,000 Chinese people have filed criminal complaints and lawsuits against former dictator Jiang Zemin for his role in initiating the devastating 16-plus-year persecution of Falun Gong.

As Falun Gong practitioners work hard to raise awareness of the lawsuits, more and more non-practitioners are showing their support for bringing Jiang to justice.

Below are three such stories as shared by practitioners.

An Internet User: “You Have Really Put Your Hearts into It”

I am a Falun Gong practitioner who lives outside of China. I often post articles and pictures on social media websites to tell people about Falun Gong. They might be Minghui articles, truth-clarification materials, or visual information about the Chinese Communist Party (CCP) persecuting Falun Gong practitioners or removing the organs from living prisoners of conscience.

Many internet users read my materials. Some helped me forward the information to others. 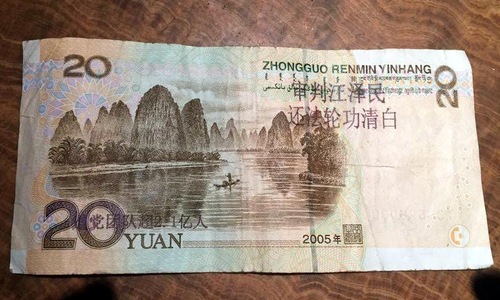 Recently, an internet user in China contacted me. He sent me a picture, which was a 20-yuan Chinese currency bill (see photo, above). On it was neatly printed the words, “Bring Jiang Zemin to Justice. Return Falun Gong's Innocence,” “Over 210 Million People Have Quit the CCP, the Youth League and Young Pioneers.”

He said to me, “You have really put your hearts into it!”

This man had bypassed the CCP's internet blockade and could access truth-clarification materials online. I reminded him about the importance of internet security.

He told me that he would tell his family about the persecution of Falun Gong.

Heartfelt Wish of a Farmer

I live in Tai'an, Shandong Province. Mr. Guo Dacheng (nickname), a farmer from Tai'an, has read a lot of Falun Gong materials in recent years. As a result, he is aware of the unjust persecution and passes along informational materials to people around him.

On March 11, 2016, he and I met on the street. He expressed his heartfelt words, “The sea of bitterness has no bounds, turn your head see the shore; Break away from the CCP to secure your life; Falun turns permanently, and brings you boundless happiness.”

He then asked me to write it down and keep it as a record. Then he asked me, “When will Jiang Zemin be arrested?” I replied, “It won't take long.”

My Husband Awakened after I Sued Jiang Zemin

They told my husband that I had filed a criminal complaint against Jiang Zemin, and under orders from higher-level authorities, they wanted to verify my actions.

My husband asked them to show him the file. They didn't have any documents on hand. My husband then said, “You don't go after those corrupt officials and bad people. Why are you bothering good people?”

The policemen asked my husband to take a message and tell me to sign the case paperwork at the police station. My husband said firmly, “No way! From now on, we will no longer cooperate with you.”

My husband is not a Falun Gong practitioner. For most of the past 16 years, he has complied with the authorities. Now, after I sued Jiang Zemin, he has confidently faced down the police.

“How I Overcame Breast Cancer”