(Minghui.org) Today's news from China includes incidents of persecution that took place in 14 cities or counties in 8 provinces. According to this report, 4 Falun Gong practitioners were subjected to mistreatment during their detention, and at least 24 practitioners were illegally arrested. 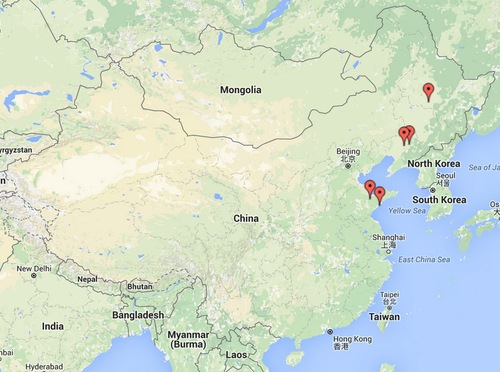 Mr. Zhang Xiansheng from Liujiazi Village in Lagu Township was arrested by officers from the Fangxiao Police Station when he was distributing Falun Gong informational materials on September 1, 2015. He was held in the Nangou Detention Center. Mr. Zhang was sentenced to three years and six months in prison in December 2015. He was taken to a sub-prison in the Liaoning Province Prison.

Ms. Jiang Jun was transferred from the Zaohua Detention Center to the Pingluo Women's Prison on February 16, 2016.

Ms. Liu Ming from Xingjia Village was arrested at home by officers from the Gudi Town Police Station in Hanting District on the morning of February 16, 2016 for suing Jiang Zemin. She was taken to the Weifang Detention Center. The detention center refused to admit her because she failed the physical exam. She was released that day.

Mr. Yu Shisheng and Ms. Zhao Xiumei, from Kanxia Village, Yuanshang Town, Laixi City, were reported to the police by a village official when hanging display boards with messages about suing Jiang Zemin in Sanqubu Village on January 28, 2016. Ms. Zhao was arrested that day and was taken to the Rizhuang Police Station.

Plainclothes officers broke into Mr. Yu's home on the morning of February 17, 2016 and arrested him. The officers confiscated Falun Gong books, a computer, printed materials, and a satellite receiver.

Officers from the Jianzhujie Police Station in Dongli District arrested Ms. Sun Fengxia and four other practitioners, Ms. Wang Yanbo, Ms. Liu Lina, Ms. Liu Yanmei, and Mr. Huang Guangji, who were visiting her on the morning of February 17, 2016. The officers confiscated notebook computers, a printer, and the cell phones they used to tell people about Falun Gong.

Mr. Ding was arrested on September 15, 2013 and sentenced to three years on April 3, 2014 for refusing to give up his faith in Falun Gong.

The guards at Yinchuan Prison kept Mr. Ding in solitary confinement for long periods of time in their attempt to make him renounce Falun Gong. According to insiders, he now appears disoriented and his health is fragile.

Prior to this latest imprisonment, he spent a total of 8 years in labor camps and other facilities in order to persecute him for his belief.

Ms. Li Ruixiang, an elementary school teacher, was sentenced to four and a half years for refusing to give up her faith in Falun Gong.

Ms. Li was arrested while teaching her students on March 12, 2015. She was indicted on July 28 and sentenced to prison on August 26.

Ms. Li is currently held at the Hengshui City Detention Center, where she was forced to do hard labor without pay. According to insiders, she was given meager amounts of food every day and punished when she did the Falun Gong exercises. At one point she was once forced to stand without moving for two hours.

Her 11-year-old son misses her, so does her husband, parents and parents-in-law. They were relieved that Ms. Li recovered from her health problems shortly after she began practicing Falun Gong in 1996, but sad to see her being illegally persecuted for upholding her belief.

Ms. Lou Amei is likely facing trial after her case was forwarded to the Shenhe District Procuratorate.

She was printing informational materials about the persecution of Falun Gong at home on November 3, 2015 when several plainclothes officers pried her door open and broke in. The police turned her house upside down and confiscated two computers, one printer, table calendars which had Falun Gong messages, one cell phone, 2,900 yuan in cash with written messages about Falun Gong, a briefcase containing her ID, bank deposit, and jewelry.

During the more than one hour long home raid, Ms. Lou was held tight to a bed. She was next taken to four different hospitals for medical examination. That night she was sent to the Shenyang City Detention Center. About 40 days later, a police officer came to notify her that she had been formally arrested.

She refused to sign the arrest document, but the police still forwarded her case to the procuratorate, which means she now faces trial.

During her detention, the guards kept the window open to expose her to the cold. In addition, they didn't allow her to cover her shoulder and arms during sleep.

Mr. Sun remains detained following his arrest on July 18 last year. Prior to this latest arrest, he was detained many times in the past for refusing to give up his faith in Falun Gong. He had to shut down his water heater installation business as a result of his extended absence. His family struggled to make ends meet.

The local police arrested Mr. Sun again this year after he filed a lawsuit against Jiang for his suffering. Under the directive of the local 610 Office, Laizhou City Procuratorate approved his arrest and forwarded the case to the Laizhou City Court.

Mr. Sun's lawyer demanded an immediate acquittal at the February trial, but the judge adjourned the session without issuing a verdict.

67-year-old Ms. Wang Fengzhi was arrested on January 31 this year while distributing Chinese New Year decorations which had Falun Gong messages. Her family is appealing to get her released.

The police also ransacked Ms. Wang's home. They confiscated her Falun Gong books and materials, two laptops, two printers, one CD burner, two punchers, one paper cutter, and other valuables totaling more than 10,000 yuan. Her wallet was also emptied by the police.

Ms. Wang was given an administrative detention, yet the notice bore no signature or arrest time. The police also demanded her daughter and son-in-law leave their cell phone numbers so the police could monitor them.

On February 17 Ms. Wang's younger sister discovered that her family's cell phones were also tapped and they could not receive calls or messages.

Ms. Liang Yunying was arrested on February 18, 2016 while distributing materials which expose the persecution of Falun Gong. The police next ransacked her home. She is now held at Nanyang Detention Center.

Prior to this latest arrest, the 70-year-old had been arrested nine times in the past for refusing to give up her faith in Falun Gong. She was twice sentenced to prison, in 2007 and 2009, respectively.

Ms. Liang was subjected to various forms of torture during her numerous detentions. Her family is very concerned about her health after this latest arrest.

Ms. Yu Lixin in her 40s was taken to the Benxi Detention Center on April 25, 2013. She was sentenced to 3.5 years' imprisonment. The detention center tried to transfer her to the Liaoning Women's Prison several times. However, the prison refused to accept her because of her physical condition. Qi Lijuan, the detention center deputy warden, cursed Ms. Yu repeatedly and slapped her face several times.

Ms. Chen Yan was arrested at the end of May 2015 for talking to people about Falun Gong. She was tried on January 20, 2016. She was tortured the day before the trial, and not allowed to use the toilet. When Ms. Chen was brought into court, she was handcuffed to the back and shackled. That day, it was below -20 Celsius degree. Ms. Chen only wore thin pants which were soaked in urine. She was in a very bad mental state.

Ms. Li Meiling was arrested on December 23, 2014 and sentenced to 3 years' imprisonment on March 5, 2015. She was later taken to the Jinan Women's Prison.

Ms. Li has been confined in a small cell because she refused to give up her belief in Truthfulness-Compassion-Forbearance, and resisted being persecuted.

The Yuzhong County Court tried Mr. Jin Jilin on December 11, 2015. His family did not learn that the trial was held until February 16, 2016.

Mr. Jin's family called the in-charge judge, Jiang Jianming and asked why the court did not inform the family. Jiang said it was because Mr. Jin did not hire a lawyer. He also told Mr. Jin's family that they could hire a lawyer at the second trial, but because it was a Falun Gong case, it would not be easy even if they hired a lawyer.

Ms. Xing Chunyan, Ms. Xing Chunrong and Ms. Liang Yuling were arrested on June 29, 2015. Mr. Bai He was arrested on July 23, 2015. The four practitioners have been detained in the detention center for more than 7 months.

Their cases were originally filed together, however, it was recently learned that their cases would be processed individually.