(Minghui.org) The Toronto Divine Land Marching Band, composed of more than a hundred Falun Dafa practitioners, participated in the annual Toronto Beaches Easter Parade on March 27 this year. They were the only Asian group represented in the parade. According to a local media report, the parade attracted more than 50,000 spectators. A number of local media outlets, including Rogers TV, provided live broadcast of the grand parade.

All along the parade route spectators cheered the marching band, while some danced to the music, some gave the band a thumbs-up, and others called out, “Welcome Falun Dafa!” 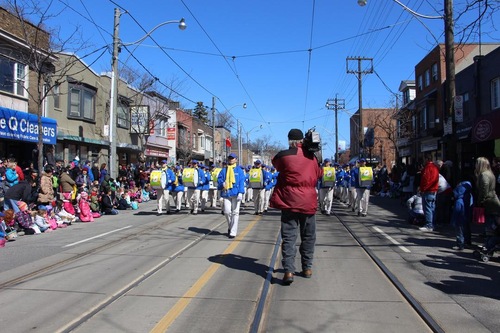 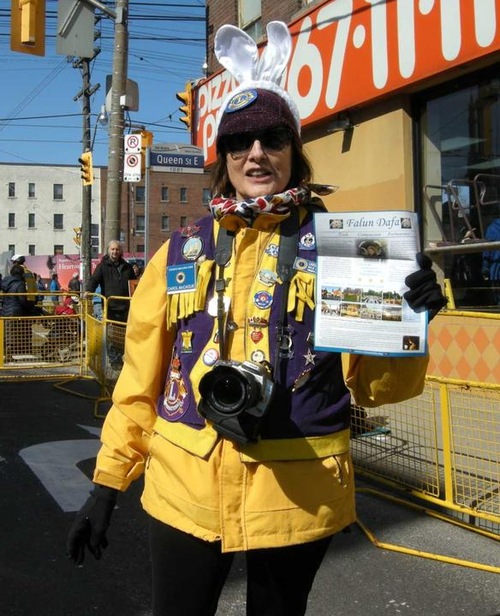 Carol McCague, one of the parade organizers

“We really like the Divine Land Marching Band. What a joy to listen to their performances,” said Carol McCague, one of the parade organizers. “A parade has nothing without a band. They make the parade, so, the more the merrier.”

“The Persecution Should Be Stopped Immediately” 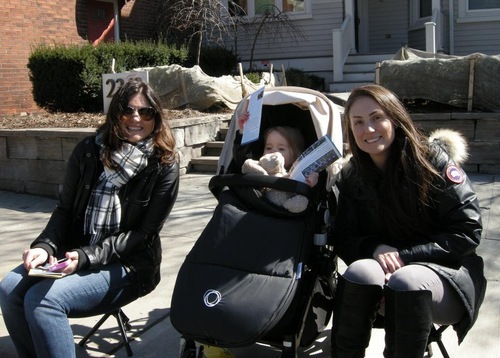 Ms. Jennifer Grose (left), Executive Assistant of a charitable foundation, said that the Chinese regime's persecution of Falun Dafa practitioners should have not happened

Ms. Jennider Grose from Calgary was impressed by the performance of the Divine Land Marching Band. “Well done! Terrific!” she said. After learning that all of the marching band members are Falun Dafa practitioners and that the Chinese Communist regime is persecuting the peaceful mind/body practice in China, she said that the persecution should have not happened. Ms. Grose stated, “Falun Dafa practitioners should have freedom to practice their belief in any country.” 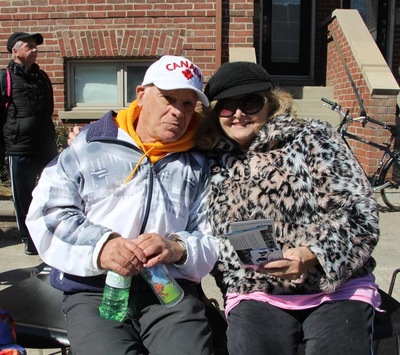 Toronto residents Rachel and her husband Raymond kept applauding as the marching band approached. “I love them, this is the best,” said Rachel. “I know they are forbidden and persecuted in China. I think the persecution must be stopped immediately.” 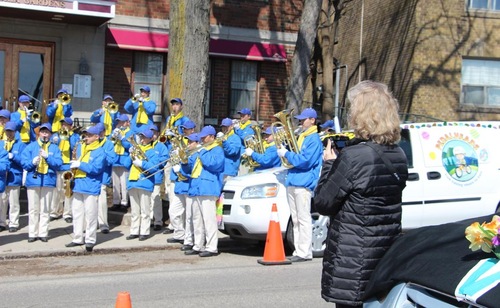 Christina videotaping with her cellphone while the marching band rehearses

“It's terrific that they can perform here,” said Christina, who videotaped the Divine Land Marching Band as they rehearsed before the parade. “I know the Chinese Communist regime persecutes them in China, and there isn't any freedom for them to perform publicly there. It's fantastic seeing them perform here!”

Ms. Liu from Liaoning Province, China was emotional when the marching band passed by. “How nice to meet Falun Dafa here! I'm so lucky! I only arrived here three months ago,” she said while holding the reporter's hand tightly. She said that she is fully aware of the persecution of the practice in China. “It's time to stop the persecution. These people are all good people!” she said. 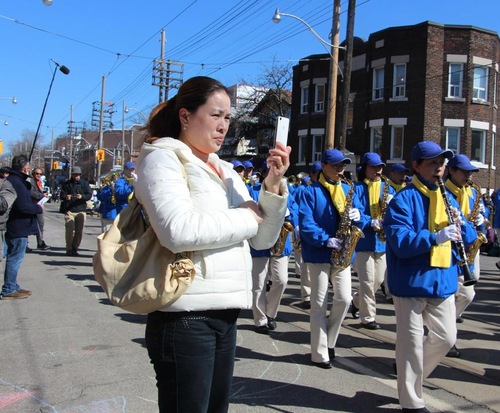 Ms. Chen from Fujian Province, China films as the marching band passes by

“The propaganda in China was horrible, and what I see here is so beautiful. I’d like to record it as a historical witness,” said Ms. Chen from Fujian Province, China.

Mr. Chen from Guangzhou City, China sighed while videotaping the marching band, “How nice! Marvelous! Wonderful! And it's legal here!” he exclaimed. He also said he believed that such a public appearance of Falun Gong will be seen in China soon.

““The Torn Artery Is Healed!””