(Minghui.org) Falun Gong practitioners in the historic city of Philadelphia, Pennsylvania have maintained a steady presence at the Liberty Bell to raise awareness about the nearly 17-year persecution of Falun Gong in China. This past Easter, March 27, 2016, was a beautiful day and many tourists, including many from Mainland China, visited the iconic Liberty Bell. 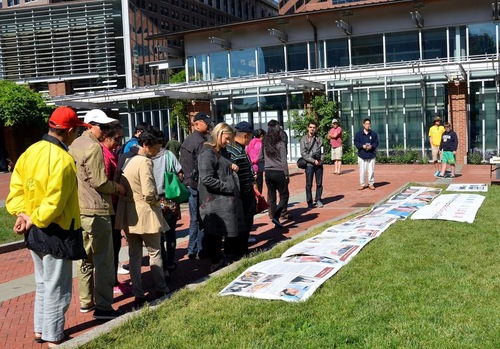 Tourists, many from China, read a display about Falun Gong near the Liberty Bell site in Philadelphia

A Misperception Cleared Up

Mrs. Zhang Guoqing, a Falun Gong practitioner and retiree who used to manage a provincial level Chinese import and export company, conversed with Mr. Wang who was visiting from China. He was surprised to find out that Mrs. Zhang was 82 years old. Her quick movements and high spirits certainly didn't look like those of someone in their eighties.

Mrs. Zhang told him that she used to have kidney disease, heart disease, arthritis and other health problems before she started practicing Falun Gong in 1994. She said that Falun Gong not only brought her improved health, but the practice also taught her the core principles of Truthfulness-Compassion-Forbearance. Living by these principles, she learned to look for her own faults in the face of conflicts. Her family relationships improved as a result, and those who knew her took note.

Mr. Wang said, pointing to the flyers at the Falun Gong booth, “I have no objection to the exercises. But I don't understand why people your age would be political.” Mrs. Zhang smiled and said she has been asked this question many times.

She told Mr. Wang that when the Chinese government banned Falun Gong in 1999, she went to appeal in Beijing, but ended up being detained by the police for more than 20 days. Because she refused to give up practicing Falun Gong, she was thrown into a forced labor camp for a year. Even though she was in her seventies, she was forced to do hard labor. She and other practitioners in the camp were forced to jog under the burning sun as punishment.

Mrs. Zhang said, “Living in China, I have experienced ups and downs for most of my life. During the Cultural Revolution, you would be accused of not getting involved in politics if you didn't participate in 'struggle sessions' against your 'rightist' family member. But now, we are simply doing exercises to keep fit and be good citizens. We are accused of being 'political' when we are merely trying to safeguard our basic rights. What is wrong with this picture?”

Mrs. Zhang replied, “China is also called the Divine Land. For a person or a society to be blessed, they mustn't deviate from a standard of morality. Making a vow is a serious matter, both in ancient times and in the modern age. There are many stories about the consequences of breaking a vow. If one vows his life to a gang, what do you think will happen to him? In other words, it takes a formal announcement to quit these organizations to negate the vow and regain blessings. It's an issue of being responsible to one's own life.”

Wang nodded in agreement. He said, “But China is so big. I really don't want to see any unrest in society. It would be bad for the Chinese people.” Mrs. Zhang replied, “If everyone could clearly see the true nature of the Communist Party, and quit these organizations, the party will naturally disappear. Any unrest would thus be avoided, as would any suffering from political movements like those in the past. Everyone quitting the Party would be the most peaceful way.”

Mr. Wang said he had learned a lot today. He also chose to quit the Communist organizations.

Mr. Liu and his family were part of a tour group from Shanghai. A Falun Gong practitioner told him why they were reaching out to the Chinese people and explained the significance of voiding their vows to the Communist organizations, so as to ensure their future safety. Mr. Liu continuously nodded in agreement as he listened.

Mr. Liu decided to quit the Communist organizations, and asked where he could find Falun Gong books. He took several copies of the Nine Commentaries on the Communist Party for himself, as well as his family and friends.

Visitors from other countries have also learned about Falun Gong at the Liberty Bell site. Many have signed the petition calling for an end to the Communist Party's forced organ harvesting from living Falun Gong practitioners, and countless have expressed their support for Falun Gong and for ending the persecution.

“Awakening from My Mistakes”