(Minghui.org) France 5, one of the major French public television networks focusing on factual programming, covered the forced organ harvesting from living Falun Gong practitioners in China in its program The Health Magazine on March 10, 2016.

Alexis Genin, a neurobiologist and scientific adviser to Doctors Against Forced Organ Harvesting (DAFOH), was interviewed during the program. Below is the English translation of the program in French. 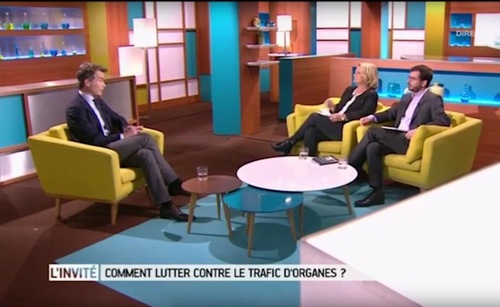 France 5, one of the major French public television networks, interviewed Alexis Genin on March 10 and discussed the Chinese regime's harvesting of organs from living Falun Gong practitioners in China.

Host 1: Hello! You are a neurobiologist and scientific adviser to DAFOH, an organization that denounces the unethical harvesting of organs. When we say unethical removal of organs, what does it mean?

AG: Well, organ donation is regulated by principles, that is, voluntary organ donation. In real life, this is not what happens in many countries, where the organ trade has become a lucrative business. This is because people often pay $50,000 to $100,000 for an organ.

Host 2: Which countries has your organization looked at?

AG: Historically, India was the first country that had systematic organ trafficking. After the law in that country changed in the 80s and 90s, medical tourists turned to other countries. Another example is Brazil, where organs are collected and traded by criminal networks. In recent years, however, China has become top of the list globally.

Host 1: What is special about China?

AG: We did not know this until 2006. In fact, organ transplants skyrocketed in China in the 2000s, from hundreds of cases in late 90s to more than 20,000 a year. These numbers come from official statistics. So, where are they from then?

After a long period of hesitation, the Chinese government finally admitted the organs sometimes came from prisoners on death row. But this cannot explain everything. Amnesty International believes there are about 2,000 executions every year, while the number of organ transplants exceeds 20,000. So there are 18,000 organ transplants, or 18,000 deaths each year, that cannot be explained.

Host 2: So, that means [organ] trafficking does exist. Is it a mafia network like in other countries, or is it persecution of certain groups in society?

AG: This is an important question DAFOH asked. DAFOH stands for Doctors Against Forced Organ Harvesting. We began to investigate China in 2006 after media reports indicated forced organ removal from prisoners in military hospitals. Regarding these allegations, DAFOH conducted three types of investigations simultaneously. One is to check Chinese scientific publications to see if there is any trace of organ trafficking. The other two are independent research to identify sources of these organs.

The results were surprising. When you look at published scientific articles from China in the 2000s, there were hundreds and hundreds of transplants, without any reference to the organs' origins. These are findings of DAFOH, which led major scientific journals to request full traceability of organs in 2011.

But more astonishing findings come from two independent investigations, one conducted by David Kilgour, a former Canadian Secretary of State for Foreign Affairs, and the other one by Ethan Gutmann, an expert on Chinese issues.

In the first investigation, David Kilgour called hundreds of transplant facilities in China through a network of investigators, asking how to obtain organs. The answer was: if you can afford it, you will have the organ in two or three weeks. Please keep in mind that in France, 18,000 people are waiting for organs, and the average waiting time is three years. But in China, if you have $50,000 or $100,000, you can get it in two weeks. When investigators asked where the organs were from, they were told, clearly and transparently, that they [the organs] were from Chinese prisoners, in particular, practitioners of a traditional Chinese meditation named Falun Gong. This is the first investigation.

In the second investigation, Ethan Gutmann took a quite different approach. He interviewed people who had been detained in China, including Christians, Tibetans, Uighurs, and also Falun Gong, to see if they had seen traces of systematic organ removal in forced labor camps. The result was striking: one half of these detainees received comprehensive physical examination while detained. Instead of checking their health condition, these medical tests were evaluating if their organs were healthy: whether the eyes are working well, the corneas can be removed, the heart rate is good, or if the liver is in a good shape.

Host 2: This is absolutely disturbing. Who are these Falun Gong members? It seems they are being persecuted in China, and there are many of them.

AG: Falun Gong is a traditional practice in China, just like how people here do jogging as a morning exercise. There is such a cultivation practice tradition in China, which also includes Tai Chi. Falun Gong suddenly became popular in China in 1990s. The Chinese government estimated there were about 70 million people practicing it in late 1990s.

Host 2: So it was dangerous to the country?

AG: It is not so in any circumstances. But with a totalitarian regime in China, 70 million people following the same practice without the government's intervention is seen as a potential “danger.” This is how the suppression started. According to the United Nations Commission on Human Rights, there are about 500,000-700,000 Falun Gong being held in forced reeducation camps at any given time. These are huge numbers... because it means a potential organ bank of 700,000 people at any given time.

Host 1: Do you expect Europe to exert pressure on this?

AG: Actions have been taken in Europe because of these investigation results. Back in 2006, they were considered allegations, but further followups proved they are facts. Rather than a mafia network, it is a network organized at the highest level in the Chinese government, because many transplants occurred in military hospitals. The European Parliament reacted quickly, and a resolution was passed in late 2013, strongly condemning such organ harvesting. This indicates it is indeed organized trafficking at the top government level, and Falun Gong practitioners are the primary victims.

Host 1: Thank you very much. The website is: www.dafoh.org, and one can find further information from the book of State Organs: Transplant Abuse in China.

AG: I would also like to add that, for anyone who wants to help, there is an online petition at the DAFOH website, and more than two million people have signed it. Thank you.