(Minghui.org) Today's news from China includes incidents of persecution that took place in 10 cities or counties in 7 provinces. According to this report, 16 Falun Gong practitioners were subjected to mistreatment during their detention, and at least 10 practitioners were illegally arrested. 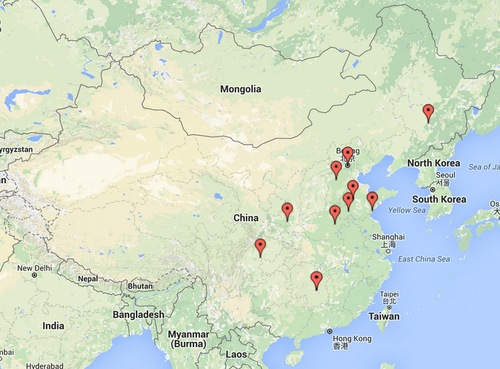 Ms. Su Guizhi was reported on the afternoon of March 5, 2016 while talking to people about Falun Gong. She was arrested by officers from the Shahezi Police Station. She is now in the Jilin City Detention Center.

Ms. Tang Yuhua, 71, a Canadian citizen, was arrested by officers from the Chanba Police Department in late February 2016. Her whereabouts are unknown.

Mr. Men Wei was stopped and told to get out of his car after his ID card was checked at the Shijiazhuang City freeway entrance on the afternoon of March 4, 2016. Domestic Security Division officers arrested him. They confiscated his cell phone, flash drives, and ID card.

Ms. Wang Meihua and Ms. Zhou Xiaochun were arrested when they were distributing Falun Gong informational materials in Xidu Town, Hengyang County on March 4, 2016. Both women are being held in the Hengyang County Detention Center.

Ms. Wei Li from Xunmukou Town was arrested at the sand and stone sales site that her family runs by officers from the Xunmukou Town Police Station on March 7, 2016, for suing Jiang Zemin.

Ms. Yu Meirong from the Rencheng District was arrested by officers from the Liuhang Police Station while she was talking people about Falun Gong in the Liuhang Neighborhood Administration Office in the Gaoxin District on March 3, 2016. The officers ransacked her home and confiscated a computer, a printer, and Falun Gong books. She is now in the Jining City Detention Center.