Mr. Wei Yazhong Sues Jiang Zemin for the Death of His Mother

(Minghui.org) On March 29, 2013, Falun Gong practitioner Ms. Ren Jinhui, a farmer, died as a result of repeated, brutal acts of persecution. Her son Mr. Wei Yazhong filed a criminal complaint against former Chinese dictator Jiang Zemin with the People's Supreme Court on September 26, 2015. He is holding Jiang accountable for the death of his mother.

Below is an excerpt from Mr. Wei's personal account of the persecution his mother endured.

My mother started practicing Falun Gong on January 9, 1997. All of her diseases disappeared after that. In January 2001, she told people about the benefits of practicing Falun Gong. She was arrested from home five days later and taken to Mancheng County Detention Center by Bailong Township Police Station officers. She went on a hunger strike to protest the arrest. She was handcuffed with her hands behind her back and brutally force-fed through a nasal tube.

She was transferred to Dongma Brainwashing Center in May. The guards struck her on her back with a thick stick until the stick broke.

She was tortured in the brainwashing center for a month. Agents from the 610 Office took her back Mancheng County Detention Center and illegally detained her for one year.

My mother was released at the beginning of 2002. She told township government officials about how she had been tortured and advised them not to get involved in the persecution. That night she was arrested and taken to Mancheng County Detention Center again. She was taken to Zhuozhou Brainwashing Center seven months later.

My mother was tortured in the brainwashing center. She was shocked with electric batons, handcuffed to a death bed, beaten, forced to sit on a small stool, and made to stand out in the sun for long hours. On August 15, 2002, they handcuffed her arms around a tree. Afterward her hands were stiff and she couldn't hold anything. 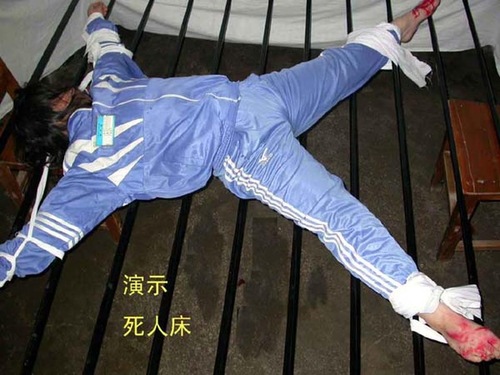 When SARS broke out in 2003, this brainwashing center was forced to close. My mother was not released. Instead, they took her to Dongma Brainwashing Center.

Died as a Result of Persecution

On her way home on the evening of October 15, 2007, my mother was arrested and taken to Bailong County Police Station. She was then taken to Mancheng County Detention Center for a half month. When the police failed to extort 1,000 yuan from her family, the police released her without our knowledge and let her walk home alone from the detention center, which is about 20 miles away, despite her poor health.

Because of the persecution, my mother became very weak. Her spine was badly damaged from the torture she had endured, and she could not keep her back straight. It got worse, and she eventually became bedridden. She passed away on March 29, 2013.