(Minghui.org) The impact of a lawsuit filed by a Shanxi Province resident against a local post office has rippled through China, reaching a northeastern province more than 1,000 miles away.

According to a leaked secret order from the 610 Office in Heilongjiang Province, all levels of law enforcement and court systems in the province must stay on high alert to prevent similar cases from developing.

Mr. Li Xifu, who lives in Taiyuan City, Shanxi, sued his local post office after personnel there declined to mail the criminal complaint he filed against former Chinese dictator Jiang Zemin. Mr. Li is exercising his legal right to bring Jiang to justice for initiating the persecution of Falun Gong that resulted in his repeated detentions.

The local court held a trial last November to hear Mr. Li's case against the post office, but the judge quickly adjourned the session upon finding out that Mr. Li practiced Falun Gong and that the withheld mail was a complaint against Jiang. 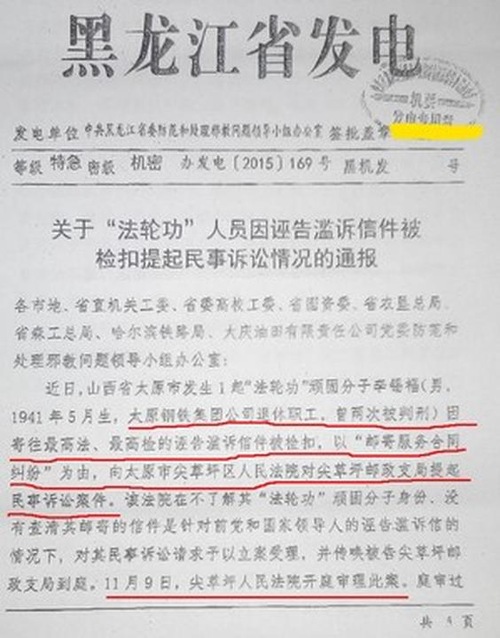 The secret order issued by the Heilongjiang Province 610 Office

The order blamed the judiciary and law enforcement for the increasing number of lawsuits against Jiang, calling them to task for not being “politically sensitive” enough and “lacking responsibility in prevention.”

Mr. Li, a 75-year-old retired steel worker, was sent to a forced labor camp twice in the last 16 years for practicing Falun Gong.

Mr. Li then filed a civil lawsuit against the post office, demanding a reasonable explanation for withholding his mail. He also demanded a public apology and a refund of his postage.

The Jiancaoping District Court held a hearing on the case on November 9, 2015, but the judge adjourned the session as soon as he learned that the concerned mailing was a lawsuit against Jiang. He claimed that Mr. Li failed to provide the receipt for his mail and a new hearing would be set later.

On November 17 the police arrested Mr. Li and two other Falun Gong practitioners and ransacked all three practitioners' homes.

Using the informational materials about Falun Gong confiscated from Mr. Li's home, the police fabricated evidence against him and soon forwarded his case to the procuratorate.

The police also harassed Falun Gong practitioners who live near Mr. Li, attempting to find out which practitioners attended the hearing on November 9.

The persecution has led to the deaths of innumerable Falun Gong practitioners over the past 16 years. Many have been killed so that their organs could be sold for transplants. More have been tortured for their belief. Jiang Zemin is directly responsible for the inception and continuation of the brutal persecution.

Although Jiang stepped down as head of the Communist Party in 2002, he has exerted much control through corrupt officials he had put in place.

Under his personal direction, the Chinese Communist Party established an extralegal security organization, the “610 Office,” on June 10, 1999. The organization overrides police forces and the judicial system in carrying out Jiang's directive regarding Falun Gong: ruin their reputations, cut off their financial resources, and destroy them physically.

“My Understanding about Shen Yun DVDs in China”