(Minghui.org) Today's news from China includes incidents of persecution that took place in 12 cities or counties in 6 provinces. According to this report, 2 Falun Gong practitioners were subjected to mistreatment during their detention, at least 13 practitioners were illegally arrested. 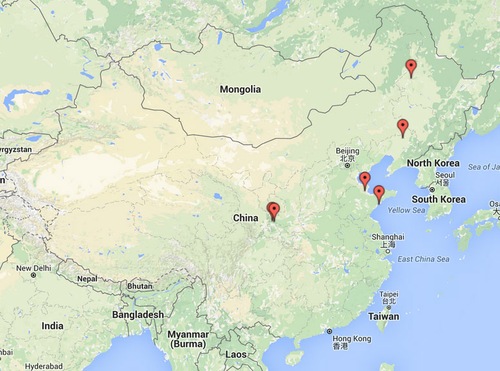 Ms. Yu Surong of Baoguang Factory was arrested at home on February 26, 2016, by Weibin Police Department officers, who ransacked her home. She is incarcerated at the Baoji City No. 2 Detention Center.

Mr. Wang Yuhui from the Shibei District and other practitioners were arrested on the afternoon of February 25, 2016, by officers from the Taishanlu Police Station for distributing Falun Gong materials. Mr. Wang was taken to the Pudong Detention Center in Jimo City and detained for 7 days.

Mr. Liu Kaidong, who fled home to avoid being persecuted, was arrested in Daqing City on February 26, 2016.

Mr. Cui Rishao was arrested on the afternoon of February 29, 2016, by officers from the Zhenbei Police Station while he was talking to people about Falun Gong. The police ransacked his home. He was released after the officers extorted 1,000 yuan from his family.

Mr. Li Peng of Jujia Village, Gaojia Town, Webin District, was arrested on his way home after he picked up his child. His whereabouts are unknown.

Mr. Jia Fengfei was sentenced to four years on September 29, 2015, for refusing to give up his faith in Falun Gong. His mother requested an open hearing during the appeal process, but was turned down by judge Xu from the Zhangjiakou City Intermediate Court.

Mr. Jia's mother filed a complaint with the Shijiazhuang Court against the Zhangjiakou City Intermediate Court. She mailed another copy of her complaint to the State Appeals Office.

Mr. Kao Fuquan, 63, was taken from his home on February 25, 2016, for suing Jiang Zemin and holding the former Chinese dictator responsible for launching the persecution of Falun Gong.

Mr. Kao is the former director of the Zhaoyuan Gold Mine Electric Appliance Plant. He has been repeatedly arrested, detained, and tortured over the past 16 years for refusing to give up his faith in Falun Gong.

He joined thousands of practitioners in 2015 in filing a criminal complaint against Jiang, only to be arrested this February. He was taken to the Zhaoyuan City Detention Center for 15 days.

Mr. Zhou Fa was taken from his home on December 23, 2015, after filing a criminal complaint against former Chinese dictator Jiang Zemin for initating the persecution of Falun Gong.

Since then, his lawyer, Mr. Ren Quanniu, hasn't been able to see him to discuss his case. The local detention center declined Mr. Ren's repeated requests to meet with his client, citing orders that only the police department can approve such visits.

Feng Jian, deputy secretary of the Chinese Communist Party of Baoqing County Police Department, was said to be the person in charge. He gave all kinds of excuses to not meet with Mr. Ren. At the same time he instructed the detention center to continue to deny Mr. Zhou any visitors.

When Mr. Ren visited the detention center again on February 25, 2016, he was given the runaround and was still unable to see Mr. Zhou.

Mr. Ren next went to different agencies to complain about the legal violations committed by Feng Jian and the detention center.

Only the Shuangyashan Procuratorate accepted his complaint, but has not yet responded to Mr. Ren.

Mr. Yang Feng complained about chest pain and poor appetite during a recent family visit. The former teacher is serving 4 years in Shandong Province Prison for refusing to give up his faith in Falun Gong.

According to his family, Mr. Yang appeared distressed and suffering from deteriorating health. They are very worried about him.

Mr. Fu Tingfa, 49, was arrested on October 9, 2015, for filing a criminal complaint against Jiang Zemin, the former Chinese dictator, who was behind the persecution of Falun Gong. His case has been submitted to the Junan County Court. He is being held in the Junan Detention Center.

This is the sixth time Mr. Fu has been arrested. Throughout the past 16 years, Mr. Fu had been repeatedly arrested and detained. As a result of being tortured he is now blind in his right eye.

Mr. Zhao Chuanwen was arrested on December 24, 2015, and detained in the Hedong District Detention Center.

Because his family was not allowed to visit him, they asked a lawyer to visit him. The lawyer met with Mr. Zhao on February 24, 2016. It was learned that Mr. Zhao was deprived of sleep and forced to take cold showers. Both his physical and mental health have declined.

More than 200 Wuxi Falun Gong practitioners filed criminal complaints against Jiang Zemin between May 27 and September 19, 2015, for initiating the persecution of Falun Gong. Ms. Ge Xiuyun was among them.

Officers from the Wuxi Police Department and the Nanchang District Domestic Security broke into Ms. Ge's home on January 20, 2016, and took her to the Wuxi No. 2 Detention Center.

Ms. Ge was sentenced to a year and a half in prison. She has been taken to the Nantong Women's Prison.