Tianjin: Over 380 Cases of Arrest or Harassment in Retaliation for Complaints Against Jiang Zemin

(Minghui.org) Jiang Zemin, the former head of the Chinese communist regime, launched the persecution of Falun Gong in July 1999.

However, many practitioners who filed complaints were harassed and/or detained in retaliation by police officers and other government officials.

In Tianjin alone, at least 381 incidents of mistreatment of practitioners were attributed to their filing criminal complaints against Jiang Zemin. 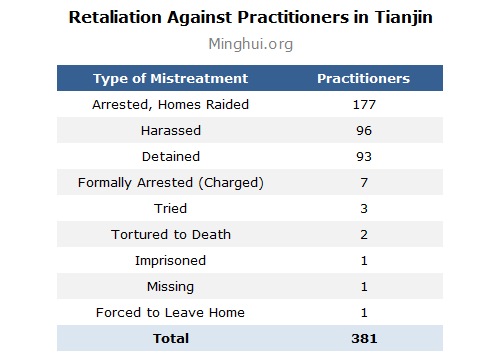 The cases depicted below are from all districts and counties of Tianjin. 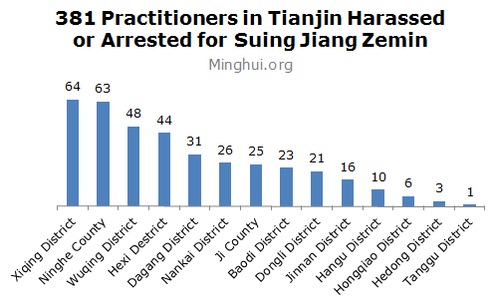 Zhao Fei, chief of the Tianjin Police Department, carries responsibility for the mistreatment and/or harassment of practitioner in many of these cases. He gave orders to post offices to stop all mail related to complaints against Jiang. As a result, some post office clerks inspected the mail and held any that contained such criminal complaints addressed to China's top court.

Many practitioners were arrested at post offices or soon afterwards. Among them were Pan Huifen (Xiqing District), Zhang Chunyan (Ji County), Chao Yuefeng (Jinnan District), Xing Junjie and Tian Xiuyun (both from the Baodi District).

Liu Haibin, a practitioner from Dongli District, was arrested at home on September 2, 2015, for filing a complaint with the Supreme People's Procuratorate. During his trial on December 15, he was charged with “submitting Falun Gong-related information to the Supreme Procuratorate.”