(Minghui.org) Groups of Chinese tourists in Europe during the winter break saw Falun Gong booths in multiple countries, and many were glad to have a chance to quit the Chinese Communist Party with help from Falun Gong practitioners. 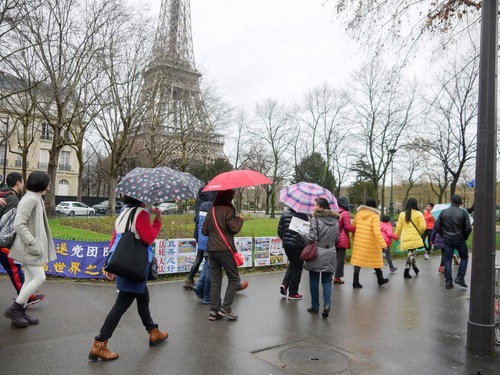 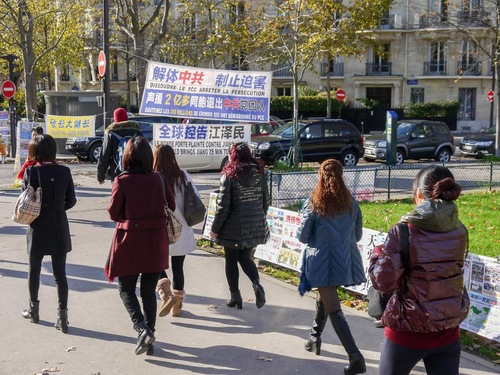 Chinese tourists pass by the Falun Gong booth in front of the Eiffel Tower.

Practitioner Ms. Jun often came to the booth in front of the Eiffel Tower, to tell Chinese visitors the facts about Falun Gong, and advise them to recognize the evil nature of the Communist Party.

One day a family of six approached Ms. Jun, and asked her for Falun Gong materials. The father said, “We have all heard about the founder of Falun Gong, Master Li Hongzhi. It would be great if we could see him. Back in the 1990's, Falun Gong was everywhere in China. I also wanted to practice. But before I started, the Party launched the persecution.”

He added, “It is great now that we see Falun Gong everywhere in Europe. We are very glad that you guys have been doing well... It is truly remarkable that you still follow the principle of truthfulness-compassion-forbearance despite the severe persecution.”

The entire family quit the Party and its associated organizations with Ms. Jun's help. She gave them computer software to circumvent China’s Internet firewall, so that they can learn more about Falun Gong. 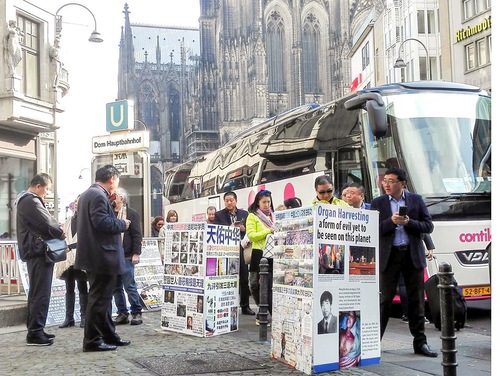 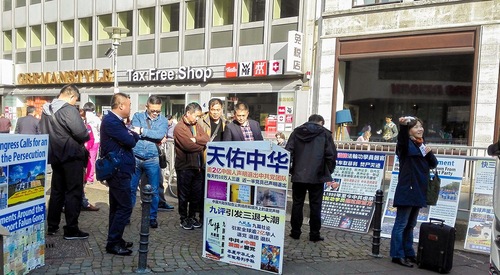 One day a group of Chinese tourists passed by the Falun Gong booth in front of the Cologne Cathedral in Germany. Most of them scowled at practitioners, and refused to take the Falun Gong materials.

One practitioner said, “My fellow Chinese, we truly wish that you will recognize how evil the Communist Party is, and abandon it. It has brought severe disasters to China. Do you really want to side with it? Quit it for your own well-being and bright future.”

One lady from the tourist group asked, “Are you paid to do this here?”

The practitioner answered, “Do I look like a poor person? I used to be a white-collar worker with a high salary. I have several homes. I now have my own company in Germany, and my business is doing well. I’m spending my off-time today to help you. Also, all of these materials are actually paid for by us, Falun Gong practitioners. No one gives us money.”

The tourists seemed touched. The practitioner continued, “I am a volunteer here, truly wishing that my fellow Chinese will avoid being destroyed along with the Communist Party in the future.”

“I had all kinds of diseases, stomach pain, insomnia, cervical pain, and so on, but Falun Gong healed them all magically. People who know me said that my life was renewed. I have also become more peaceful. Falun Gong benefits me both physically and mentally, but doesn't cost me a penny. Anyone with a conscience would stand up and speak for Falun Gong when it is being persecuted by the Party. I feel that it is my responsibility to tell the public what Falun Gong really is, and how the Party is persecuting it.”

“My wish is that you realize that Falun Dafa is good. You will be blessed.”

The Chinese tourists listened quietly. The lady who asked if practitioners were paid was deeply touched. She kept saying “Thank you for telling us this.” Before they left, almost all of them quit the Party.