(Minghui.org) The Bleeding Edge, a film based on the state-sanctioned harvesting of organs from living Falun Gong practitioners in China, had its U.S. premiere at the Landmark Theater in Washington, D.C. on December 14. The screening was sponsored by the Victims of Communism Memorial Foundation.

Two themes in the film highlight the persecution of Falun Gong in China: forced organ harvesting and Internet censorship. 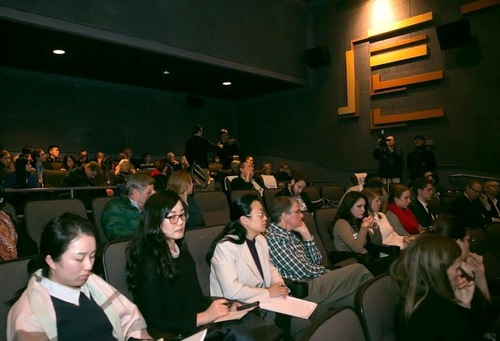 The premiere of The Bleeding Edge in Washington D.C. on December 14

In the early 2000s, the increasing spread of information technology was quickly becoming a perceived threat to the Chinese communist regime. Western technology companies were paid large sums to develop a high-profile project dubbed “The Golden Shield Project,” aimed at censoring and restricting Internet access as well as monitoring the activities of Chinese citizens.

In the film, when a young Western technology executive based in China suffers a heart failure on the job, he receives a heart transplant from an unknown donor. Once he discovers the horrific truth behind his operation, he must risk his life to help save the next victims and find redemption.

Director Leon Lee told the audience after the screening that 90% of the content is based on the real-life events in China; the experiences of the protagonist, a young female Falun Gong practitioner, were taken from many victims' true stories.

Marion Smith, the chair of the Victims of Communism Memorial Foundation, praised the cast's performances. He said the American people should pay attention to forced organ harvesting and other human rights violations in China.

Smith added that the U.S-China relationship should be based on these truths, and that human rights is an indispensable component that the new American administration must deal with.

Quinn Nii, an Asian-Pacific American activist engaged in building bridges between the East and West, said, “I am glad the premiere has drawn attention from media … I believe many people are concerned about the violence and the persecution of beliefs in China.”

The Bleeding Edge has been screened at the British Parliament and the Vancouver Asian Film Festival. It won the 51st Gabriel Award in June 2016.