(Minghui.org) Today's news from China includes incidents of persecution that took place in 10 cities or counties in 8 provinces. According to this report, 20 Falun Gong practitioners were subjected to mistreatment during their detention, and at least 18 were illegally arrested. 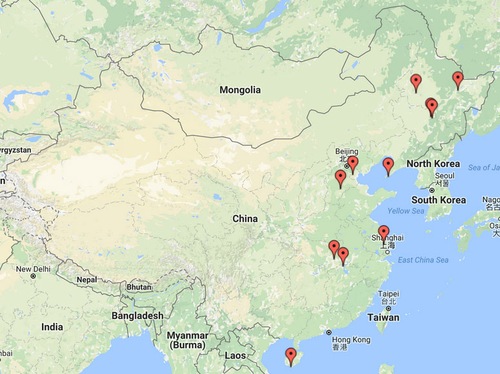 Ms. Wang Jiping was arrested around October 8, 2016, by officers from the Tongzhou Domestic Security Division. Her whereabouts are unknown.

Ms. Wang was sent to a forced labor camp for two and a half years on January 29, 2001, and she was held in the Jiangsu Province Women's Forced Labor Camp. She became paralyzed as a result of being brutally beaten by guards and inmates.

Ms. Wang was sentenced to six-and-a-half-years in prison in June 2006 for refusing to give up Falun Gong. She was taken to the Nanjing Women's Prison in a wheelchair.

Ms. Chen Lihua and Ms. Zhang Shuli, teachers in the Shulan City No. 1 Middle School, were arrested on October 17, 2016.

Mr. Yu Hongfu is held in the Nanshan Detention Center.

Ms. Xie Wei was arrested by officers from the Qianjin Domestic Security Division on the afternoon of February 23, 2016. She was transferred to a detention center after being held for 15 days. She was secretly sentenced to one-and-a-half years in prison by the Qianjin District Court on July 22, 2016.

Ms. Qu Guixian was secretly sentenced to prison by the Shahekou District Court. She appealed to a higher court. However, the court upheld the original sentencing. She was taken to the Dabei Prison in Shenyang City.

Mr. Sun Deguo was arrested on the evening of October 19, 2016, for distributing Falun Gong materials in Dongfeng New Village. He was taken to the Daqing No. 1 Detention Center the next day.

Ms. Liu Jinhua from the Xinxing Farm, Baoting County, was followed and arrested by plainclothes officers on September 28, 2016, for talking to people about Falun Gong.

Ms. Zhou Yufang, who went out with Ms. Liu, was also arrested. Both practitioners are held in the Sanya Police Department. Family visits have been denied.

Officers from the Lutai Police Station broke into the home of Mr. Qiu Chengfu and his wife Ms. Yin Lianhua on October 18, 2016, and arrested six practitioners. The practitioners were studying the Falun Gong teachings together. Mr. Qiu was not arrested. The six practitioners were taken to the Ninghe District Detention Center. The other five practitioners are: Ms. Yu Wenxiu, Ms. Chen Yuling, Ms. Wang Shumin, Ms. Xu Guitai, and Ms. He Jing.

Ms. Shen Jinhong, 68, from Xingzi County, was arrested for putting up Falun Gong informational stickers in a park near her home on October 18, 2016. She is held in the police department. Sheng Xiaoming, an officer with the Domestic Security Division, and a group of other officers ransacked her home that afternoon.

Ms. Zhang Qiumei and Ms. Yuan Zhenhong from Hong'an County went to the countryside to talk to people about Falun Gong and hand out desktop calendars on October 14, 2016. They were arrested by Chen Jian, director of the local police station, and police officers. They are still held in the Huolianfan Detention Center.

Ms. Zhu Lijie from Jishu Town was harassed on the evening of October 17, 2016.

Mr. Wang Xinwu from Jishu Town was arrested on the morning of October 18, 2016. His home was ransacked.

Mr. Jiu Changying and Mr. Wang Yuansheng from Jiuyang Village, Jizhou Town, Jizhou City, were arrested by officers from the Jizhou Town Police Station on October 20, 2016. Their homes were ransacked. Their whereabouts are unknown.

“My Astounding Recovery That Shocked My Family”

“My Life Spared in a Serious Car Accident”