(Minghui.org) Today's news from China includes incidents of persecution that took place in 5 cities or counties in 5 provinces. According to this report, 6 Falun Gong practitioners were subjected to mistreatment during their detention, and at least 14 were illegally arrested. 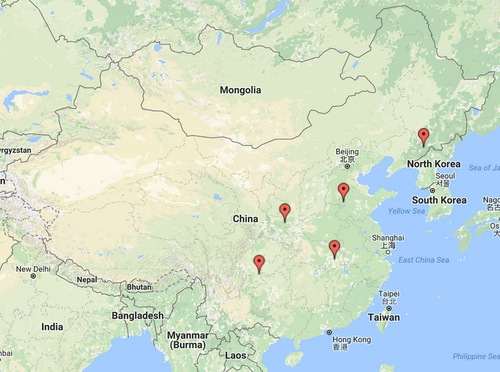 Ms. Qu Shufeng from Gaomi City, Shandong Province, was arrested by the Liuhe County police when she handed out an Internet censorship circumvention software to Zhao Jun, deputy chief of the Liuhe County Police Department, in July 2016. She is being held in custody.

Ms. Ma Jie and her younger brother Mr. Ma Minghai were arrested at home along with nine other practitioners who were there on the afternoon of May 10, 2016. The officers confiscated Falun Gong books, photos of the founder of Falun Gong, computers, and cell phones. Six elderly practitioners were released that night. The other five were taken to the Qindu District Lockup Center in Wujiapu Town.

Ms. Zhao Shengyun from Xuyong County was arrested by Zhang Yuanlong, a domestic security officer who was staked out nearby when she was talking to people about Falun Gong on the morning of November 3, 2016. She was taken to the Luzhou Detention Center and is still being held.

Mr. Kang Shoubo from Songbei Village, Songlin Town, Linqing City, was arrested by plainclothes officers from the Police Department's Domestic Security Division on the morning of June 9, 2016. He was taken to the Linqing City Detention Center. The officers ransacked his home and confiscated a computer, a printer, a DVD burner, and a car.

Ms. He Zhuqing from Songjiaqiang Village, Tuanfeng County, was arrested at home by officers from the Tuanfeng County State Security Division on October 10, 2016. No family visits are allowed.

““Dafa Saved My Life, Which Means My Whole Family Is Saved!””