(Minghui.org) Canadian Falun Dafa practitioners have been invited to participate in Santa Claus parades in many cities across Canada for many years.

Following the parades in London, Ontario, on November 12 and in Winnipeg, Manitoba, on the 13th, Falun Dafa (also known as Falun Gong) practitioners participated in holiday parades in four more cities on November 19 and 20: Toronto, Niagara Falls, and Hamilton in the Province of Ontario and Montreal in Quebec. 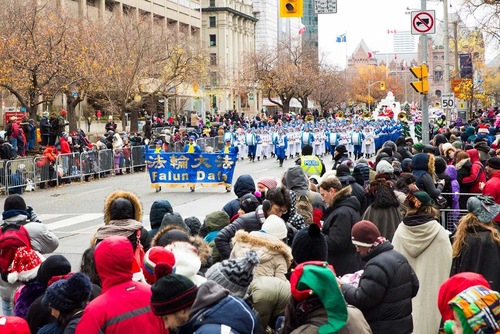 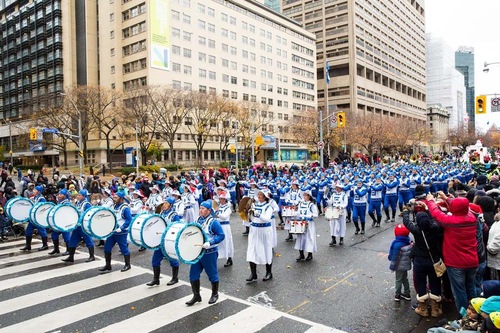 The Toronto Tian Guo Marching Band participated in the 112th Santa Claus Parade in Toronto on November 20. According to organizers, 800,000 spectators watched the largest parade in Canada along the parade route. 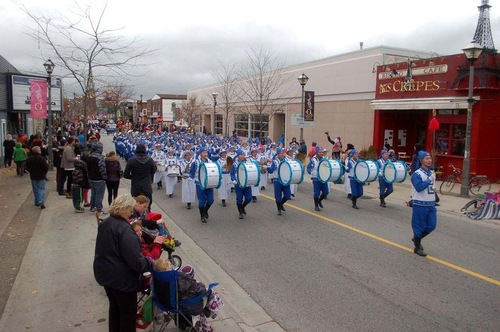 The Tian Guo Marching Band was the only Chinese band among the 21 bands in the parade. Numbering 110 musicians, the band played “Jingle Bells, “Falun Dafa Is Good,” “Falun Holy King,” and “The Fa Rectifies Heaven and Earth.” Their precision steps and resounding music amazed the organizers and the spectators. 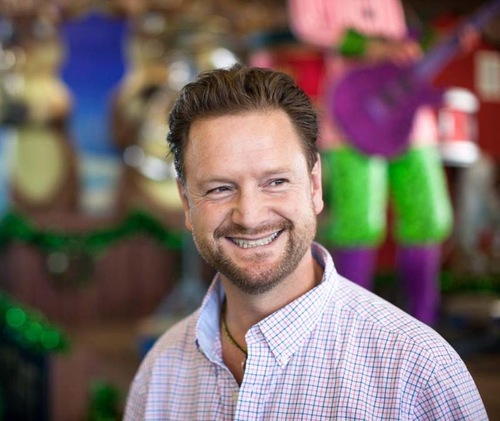 Toronto parade band coordinator Mr. Craig McRae had high praise for the Tian Guo Marching Band. He thought their performance was spectacular, the band members were very professional, and their melodies were wonderful. He said he had never heard such melodies or seen such traditionally classic uniforms. 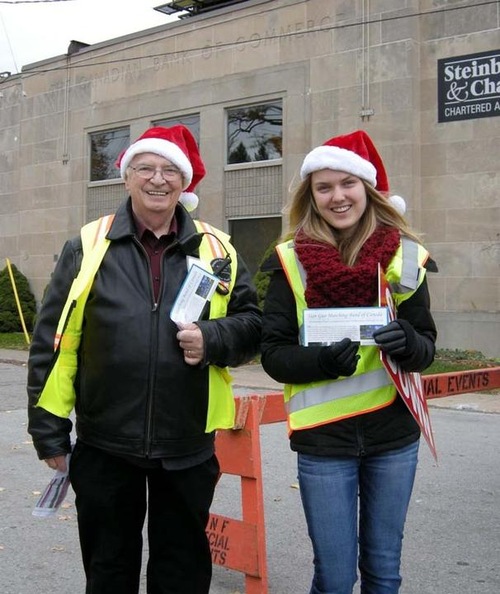 Mr. Ted Power, one of the Niagara Falls Santa Claus Parade organizers, had heard of Falun Dafa in news and knew about the ongoing persecution of the practice in China. He said that the Chinese Communist Party (CCP) persecutes Falun Gong practitioners because it is one-party dictatorship. As a Christian minister, he is well aware of what dictators can do. He said that that the values of truthfulness, compassion, and forbearance are universal and that everyone should follow them. 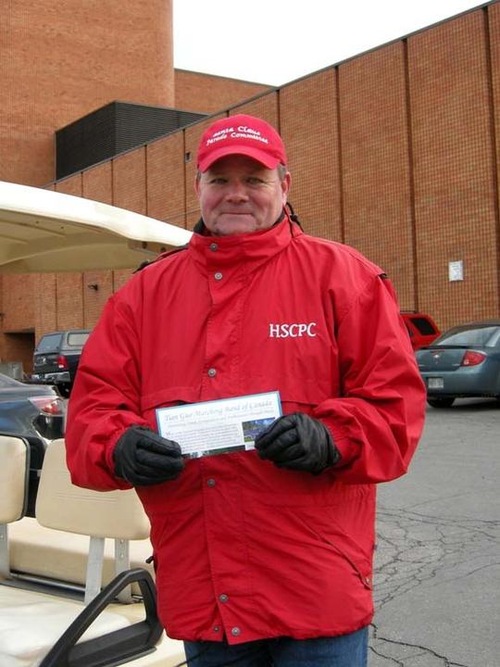 Mr. Jim Cooms, chairman of the Hamilton Santa Claus Parade Committee, commented that the Tian Guo Marching Band's performances were “terrific! The Falun Dafa group is wonderful!” He said that they had invited the band to participate in their parade for many years. 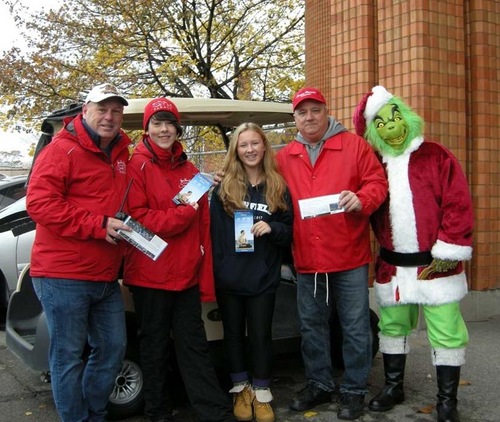 Mr. Garry Goodwin (first from left), Minister of Finance of the Hamilton Santa Claus Parade Committee, and his colleagues

Mr. Goodwin, Minister of Finance of the Hamilton Santa Claus Parade Committee, said that the CCP's persecution of Falun Gong practitioners in China is terrible: “They should not have been persecuted for their faith. Nowhere in the world should they be persecuted.”

Spectators: Falun Gong Warmly Welcomed in Canada and Other Countries 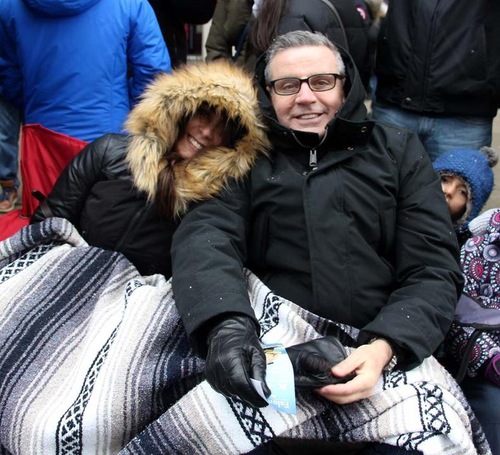 Paul and his wife, residents of Toronto, huddle under a blanket to watch the parade. Paul said the band's performance was “exhilarating. What's amazing is that they performed so well in such a cold weather, bringing warmth to us in the cold.” 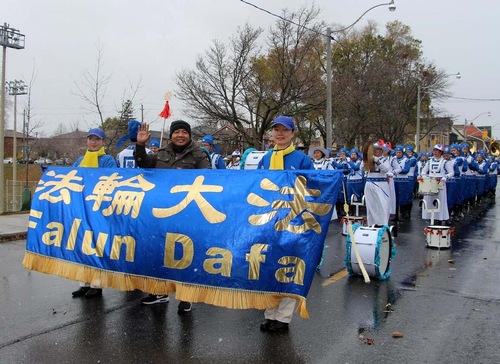 Rowel who immigrated from the Philippines to Toronto this year, stands with the practitioners holding a Falun Dafa banner. He asked his wife Lyna to take a picture. The couple liked the band and said they would go online to learn more about Falun Gong. 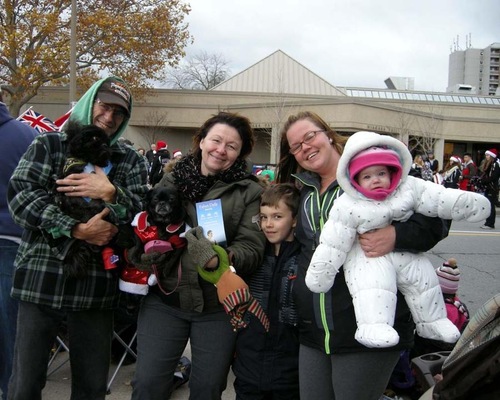 Niagara Falls resident Ms. Juanita Porkolab (second from left), her husband, and their daughter and grandchildren agree that everything about the Tian Guo Marching Band is wonderful and beautiful. 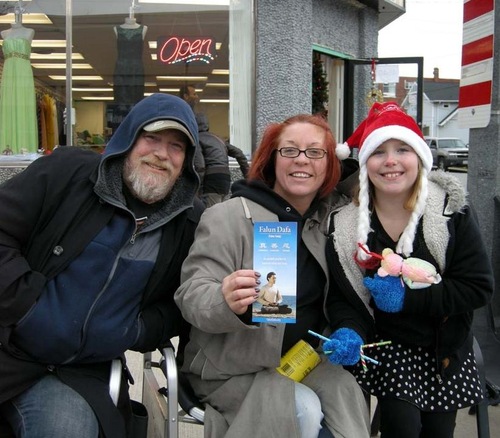 Ms. Kim Dwyer (middle), her husband, and daughter are amazed by the band.

Upon learning about the CCP's state-sanctioned forced organ harvesting of Falun Gong practitioners, Ms. Dwyer said it was “horrible! More people should know about it.” She said she absolutely supports practitioners' efforts to end the persecution. 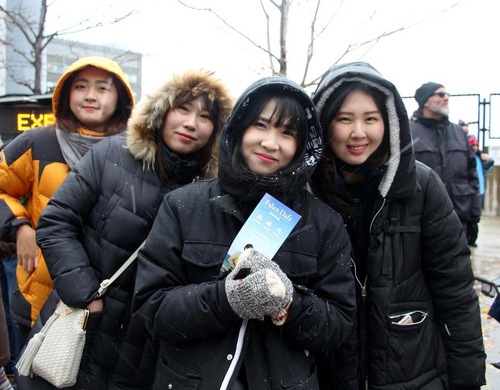 Meerae, a student from Korea, and her classmates are excited to see the Tian Guo Marching Band perform. After learning that Falun Dafa is being persecuted in China, they said that they would go online to learn more about the practice. 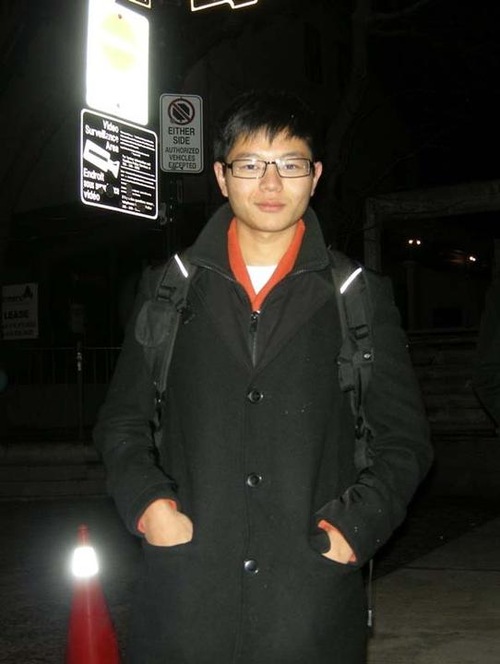 Chinese Canadian university student Jason called for the CCP to stop the persecution of Falun Gong.

Jason studies at McMaster University. He immigrated with his parents to Canada when he was five years old. He and his friends saw the parade in Hamilton and said that he really liked the music the Tian Guo Marching Band played.

This years Montreal's annual Santa Claus Parade featured 25 entries involving more than 1000 people. According to the organizers, more than 300,000 residents and tourists from around the world watched the parade on Rue Sainte-Catherine in the downtown area on November 19. 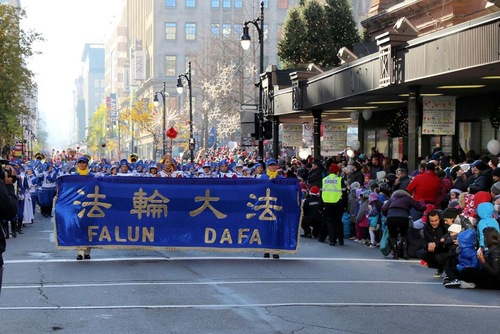 The Tian Guo Marching Band, which is made up of 150 Falun Dafa practitioners from New York and Montreal, was the only Chinese contingent in the parade and was one of the most popular groups. 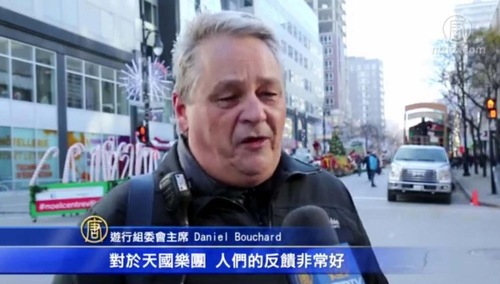 Mr. Daniel Bouchard, chairman of the Santa Claus Parade Committee, had high praise for the band. He said the band had the largest number of participants and featured bright costumes and pleasing music, which impressed the spectators. "It's a great band with so many musicians performing in unison!" he commented.

Micheline, a local resident, said that the band was super and looked beautiful. The music they performed was “terrific!

Many Chinese immigrants saw the Tian Guo Marching Band for the first time in one of the Santa Claus Parades. They were amazed at the spectacular lineup and wonderful music. Some learned about the persecution of Falun Dafa and agreed to withdraw their memberships in the Chinese Communist Party and its affiliated organizations.