(Minghui.org) Today's news from China includes incidents of persecution that took place in 16 cities or counties in 10 provinces. According to this report, 1 Falun Gong practitioners were subjected to mistreatment during their detention, and at least 28 were illegally arrested. 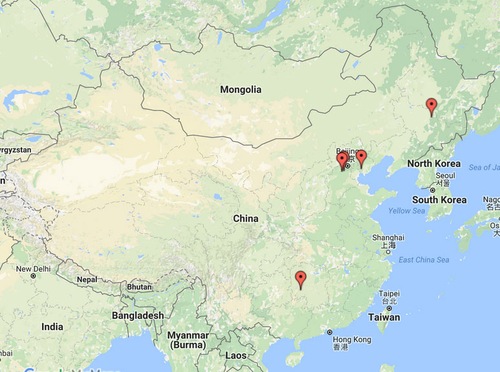 Mr. Shu Shanming, 53, from Nanshui Village, Gaosha Town, Dongkou County, worked at a material factory in Xinxu Town, Huizhou City, Guangdong Province. He has been missing since October 16, 2016. It's believed that he's been arrested.

Officers from the Hujiazhuang Township Police Station broke into Ms. Liu Jinying's home in Nanruhe Village. Four officers ransacked her home and confiscated two copies of Zhuan Falun and Dafa materials. They attempted to take her away with them but did not succeed.

Fu, director of the Baiqi Town Police Station, and others went to the Baiqi Town Hospital to harass Ms. Qu Shumin on the afternoon of October 18, 2016. They attempted to ransack her home. Fu called in four or five officers, who blocked the hospital's front and back entrances. They tried to intercept and arrest her. Ms. Qu managed to escape.

Mr. Yang Changkuan was tried on a charge of “using a cult to undermine law enforcement,” a standard pretext used by the Chinese communist regime to frame and imprison Falun Gong practitioners.

He first appeared in court on September 13. His two lawyers entered a not guilty plea for him, as no law in China criminalizes Falun Gong.

Towards the end of the hearing, the court president kept gesturing at the presiding judge, who then moved to stop the lawyers from finishing their defense arguments and he adjourned the session.

The trial resumed on October 14. The prosecutor presented additional evidence against Mr. Yang, but the lawyers questioned the validity of the evidence.

The judge said he'd schedule a new hearing to announce a verdict.

Ms. Lan Chao was threatened for her faith in Falun Gong, a spiritual discipline being persecuted by the Chinese communist regime.

The 30-year-old is an employee at the No. 1 Branch of the Daqing Oilfield Transportation Company. She had acute abdominal pain on the morning of October 17 so she called in sick. Her supervisor Wang Degang granted her leave.

Hours later, Wang called Ms. Lan and demanded she report to a brainwashing center for a "study session." Ms. Lan refused because she knew that the study session was designed to try to make her renounce Falun Gong.

She got another call moments later, this time from Cui Ying, a colleague in charge of “maintaining stability.” Cui said, "You can't be so stubborn. You must listen to the higher-ups. We'll have someone accompany you to the brainwashing center. You'll be back in a few days. If you keep saying no, we'll record you as missing work for the entire month."

Another supervisor texted her shortly afterwards, saying they were on their way to pick her up. She refused to open the door.

Mr. Yang Xiaoming and Mr. Yu Chunxue, 61, were arrested on March 11, 2016, and tried on October 17. They were each sentenced to 7 years and 3 months for distributing information about the persecution of Falun Gong.

Mr. Yang defended his innocence as no law in China criminalizes Falun Gong and he was simply exercising his constitutional right to freedom of belief.

Both men remain in the Niushan Detention Center. It's unclear when they'll be transferred to prison. In the meantime, the police have refused to return Mr. Yang's car, which was seized after his arrest.

Four local women appeared in court for the third time to defend their constitutional right to practice Falun Gong.

During the latest hearing on October 18, the defense lawyers reiterated that no law in China criminalizes Falun Gong and that their clients should never have been prosecuted for their faith, which caused no harm to anyone.

Ms. Li suffered from trauma-induced blindness and hearing loss the day after her arrest. Despite her lawyer's efforts, the police refused to allow her to apply for bail on medical grounds and instead took her to the No. 1 Detention Center in Xiamen.

Ms. Zhang Linying, around 50, and Mr. Wang Xuejun, in his 40s, were targeted because they refuse to renounce Falun Gong, a spiritual discipline being persecuted by the Chinese communist regime. Both of them work at the Daqing Oil Field.

Mr. Wang was seized from work on October 12, while Ms. Zhang was arrested 9 days later. They were sent to the "721 Brainwashing Center."

Their latest arrest again terrified their families and left them struggling to live a normal life.

Mr. Liu Xinyuan, 28 years old, is an art teacher at Hechi College. He was arrested on January 7, 2016, and sentenced to 4.5 years shortly afterwards.

The local higher court held a hearing without informing his family and quickly issued a decision to uphold the trial court's guilty verdict.

Mr. Liu has been imprisoned for five months.

Mr. Xu Genlin was sentenced to 2.5 years’ imprisonment by the Gushu District Court on October 14, 2016. His lawyer entered a not guilty plea in court. They have filed an appeal with the Hangzhou Intermediate Court.

Ms. Zhang’s two lawyers entered a not guilty plea. During the trial the three practitioners talked about the benefits they obtained from practicing Falun Gong.

Twelve Falun Gong practitioners were arrested on September 21 and 22, 2016. Mr. Zhang Chuanfang and Mr. Jiang Yan were released on October 7.

Mr. Liu Yazhou was arrested in front of his home by officers from the Dalian Domestic Security and the Shanshilibu Police Station on the morning of June 28, 2016. The arrest was approved at the end of July. His case was submitted to the procuratorate at the beginning of September 2016.

Mr. Liu’s case was transferred to the court on October 17, 2016. His family and lawyer tried to see the judge on October 19. The judge refused to meet them, saying that he was too busy.

Mr. Huang Zongpeng’s family and lawyer went to visit him in Xingning Detention Center on October 21, 2016. They were told that his appeal was turned down and the six-year sentence was upheld.

Wuqing Court issued a verdict against Mr. Gao Zhiyong from the Wuqing District on September 29, 2016. He was sentenced to 4.5 years and has been transferred to prison.

Ms. Cai Junxia from Qianxi County, Tangshan, was illegally tried on June 13, 2015 for filling a criminal complaint against Jiang Zemin, the former Chinese leader. The court did not give a verdict to Ms. Cai’s family until October 10, 2016, the last day of the trial period. Ms. Cai was sentenced to four years’ imprisonment and fined 5000 yuan.

Ms. Cai has filed an appeal with the Tangshan Intermediate Court.

“Working Together to Help People Learn about Falun Dafa”