(Minghui.org) The City of Whitehorse held their annual Spring Festival on October 16, 2016. The Falun Dafa Association of Victoria and the Tian Guo Marching Band were invited to participate in the event. Besides the band's performances, the Falun Dafa (also known as Falun Gong) group also presented a demonstration of the peaceful exercises on the festival stage.

The Falun Dafa booth offered exercise demonstrations and instructions on how to fold origami lotus flowers with children. 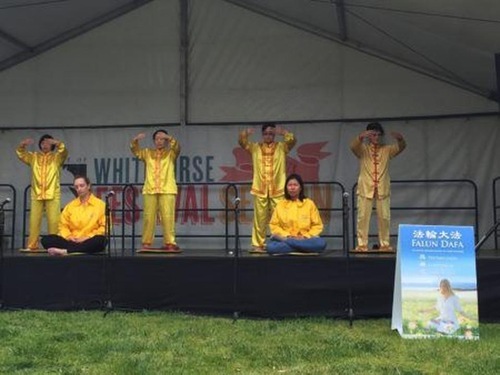 Falun Dafa practitioners demonstrate the exercise on stage at Spring Festival of the City of Whitehorse on October 16, 2016. 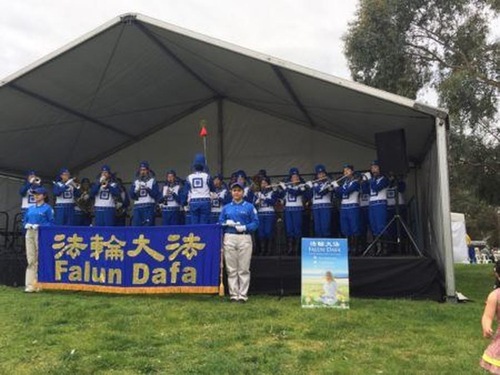 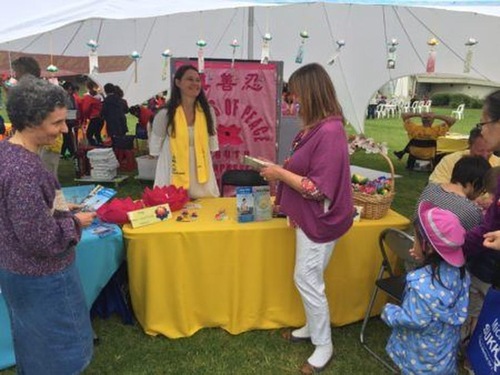 Many people visit the Falun Dafa booth at the Spring Festival.

Festival-goer Rob Kingston took many photos of the band's performance. He said, “The band is outstanding and their costumes are so unique. I'm impressed!”

Local residents Kate and her husband Gary talked with a practitioner for a long time.

Kate had known about the persecution of Falun Dafa in China but learned more from the discussion. She said, “Now I know that Falun Dafa is based on Truthfulness-Compassion-Forbearance in addition to the meditation and exercises. It is wonderful!”

Gary said he often saw Falun Dafa activities downtown. He said, “The Chinese regime bans Falun Gong, but the practitioners do not harm anyone. The brutal persecution is a violation of human rights and cannot be tolerated.”

He added, “The Australian government should have a baseline when dealing with China in commercial trade. They should speak out on human rights issues.”

Kate said, “I am signing the petition to send a message to our government. If more people speak out, it will lead to more action.”

“Believing in Master Amid Tribulations”

“German Passerby: “You Give Me Hope for the Future””