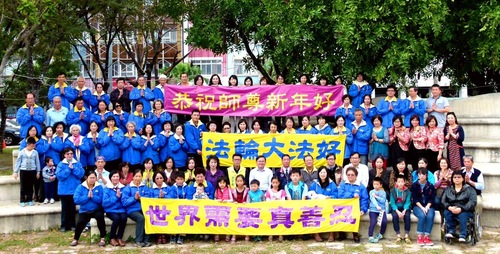 More than 20 government officials and business leaders wish Master Li Happy New Year with Falun Gong practitioners. Liu Chao-hao, member of Taiwan Legislative Assembly, is the 10th from right in the second row. On his left is Chang Kuo-chou (Taitung mayor) and on his right is Hong Zongkai (Legislative member of Taitung County).

Many guests sincerely thanked Master Li for introducing the principles of Truthfulness-Compassion-Forbearance, because they offer positive energy and hope to this chaotic world. Liu Chao-hao, a longtime human rights advocate and supporter of Falun Gong, said people should have freedom of belief. “I thanked the founder of Falun Gong and want to say Happy New Year to him. I also want to wish all practitioners well.”

After hearing the lawsuits against former Chinese leader Jiang Zemin for persecuting Falun Gong, Liu signed a petition in August to support the initiative.

Chang, mayor of Taitung, hoped more people could hear about Falun Gong and benefit from it.

Hong said he paid close attention to the persecution of Falun Gong in mainland China. He was glad to attend this event and said this human rights violation should stop.

Chen Kunjie, Chiayi Townsmen Association secretary, said he personally benefited from Falun Gong. He agreed with the principles of Falun Gong and, as one practitioner recommended, always keeps “Falun Dafa is good” and “Truthfulness-Compassion-Forbearance is good” in mind.

Chen said this helped him to survive a recent car accident. “I know the principles of Falun Gong are good for everyone and for society in general. And I hope more people will benefit from it.”

Lin Qiumei, an insurance company manager, said she likes to stay with Falun Gong practitioners. “The positive energy from these practitioners always motivates me to contribute more.” She is thankful to Master Li for introducing Falun Gong and “making this world more peaceful”.

Several practitioners shared their experiences practicing Falun Gong. Xun Ting said her marriage was nearly broken when she started to practice 13 years ago. “Falun Gong guided me to look within, be a better person, and treat others with compassion.” This brought positive changes to her family, and many of her friends learned Falun Gong is good in this way.

Another practitioner Jia Wen said she used to feel lost in life. The practice of Falun Gong helped her understand the purpose of life, and now she feels happy and fortunate.

Ms. Fang said Master Li not only took care of all practitioners, but also told them to be compassionate towards everyone. Even for police officers in mainland China who mistreated Falun Gong, practitioners tried to tell them the facts hoping to stop them from doing bad deeds.

Ms. Fang also more people could read about Falun Gong and do not miss the precious opportunity.

“On Practitioners and Taking Criticism”