(Minghui.org) Police in Beijing arrested 609 Falun Gong practitioners and sent another 47 to brainwashing centers in 2015 for refusing to renounce their faith.

Most of the practitioners arrested have been released, but some still remain in detention. The authorities have formally approved 28 of the arrests; among this group, 8 practitioners were sentenced to prison, while the rest are either facing trial or awaiting verdicts.

The number of arrests increased significantly in the second half of the year, which accounted for 417 cases, compared to 192 in the first half.

This increase in arrests coincided with practitioners' filing of criminal complaints against Jiang Zemin beginning in May, calling for China's highest court to prosecute the former Chinese Communist Party leader, who initiated the persecution of Falun Gong.

Between June and December, there were 256 arrests attributed to local officials' retaliation for practitioners' complaints against Jiang. These accounted for 56% of all practitioner arrests in that period. 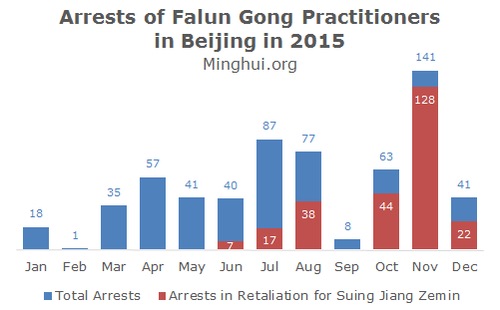 Figure 1: Arrests of Falun Gong practitioners in Beijing in 2015

A total of 55 practitioners were tried in 2015, including those arrested in the previous year. Among them, 32 were sentenced to prison, with terms ranging from 6 months to 8 years. In addition, 7 practitioners who were tried prior to 2015 received their prison sentences in 2015. 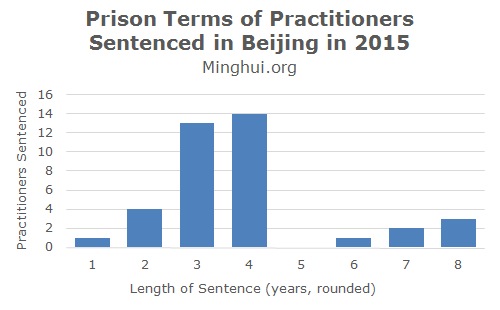 Ms. Wang Lei, 50, was sentenced to eight years in prison on November 24, despite having been diagnosed with a mental disorder after being shocked with electric batons by labor camp guards in 2001. She later recovered after doing the Falun Gong exercises and studying its books.

In 2010, her mental state deteriorated after police arrested her and injected her with a large quantity of unknown substances. She managed to return to normal some time after her release, only to relapse following her arrest in 2015 and subsequent beatings by guards.

Arrested for Giving Out Calendars

Mr. Wang Jianfu was sentenced to 7 years and 6 months in prison on November 21. Including the eight years he had served from 2002 to 2009, he would spend a total of 15.5 years in prison. His latest arrest came after he distributed calendars containing information about the persecution of Falun Gong by the communist regime.

As practitioners continue to explain the persecution, more agents who had been compelled by the state to arrest and abuse practitioners have chosen to stop participating. Many police officers, when going to “talk” to practitioners, said that they had been ordered to do so and no longer bothered practitioners.

For example, three officers went to a practitioner's home in October to verify that he had submitted a criminal complaint against Jiang Zemin. The practitioner told them that it was within his rights as a citizen to file the complaint. One officer said, “We're just following orders. Practice [Falun Gong] at home if it's good for you.”

Two practitioners were arrested in August for putting up posters calling to prosecute Jiang Zemin. One practitioner told a policeman, “I have to practice Falun Gong. I would have died already if I hadn't practiced it.” The officer simply said, “Go home, then.”

“Three Generations of My Family Benefit from Falun Dafa”