(Minghui.org) Falun Gong practitioners who are also members of the European Divine Land Marching Band gathered in Dortmund, Germany for group practice during the 2015 Christmas holiday. They shared their reasons for joining the band.

The band performed at parades in Paris, Vienna, and other European cities in 2015, and received positive feedback. 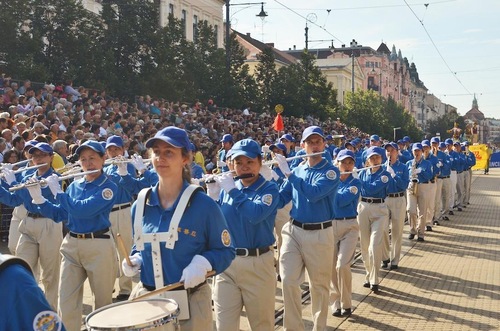 The European Divine Land Marching Band at the Hungary National Day Parade in 2014.

Mr. He is a chef in a Chinese restaurant, and plays trumpet in the band.

“I have enjoyed improved health and a peaceful mind since becoming a Falun Gong practitioner,” he said.

He continued, “When the Chinese Communist Party's (CCP) crime of harvesting organs from living practitioners was exposed in 2006, I wanted to raise awareness of the persecution in China. The Divine Land Marching Band was established at that time and I decided that this was where I could make a difference.”

“Besides Falun Gong music, we also play Ode to Joy and other classical music. Parade spectators have given us warm feedback. They danced to our music, clapped, and took pictures with us. I really enjoy such experiences.”

Mr. Guo Jufeng, an engineer, has been a member of the marching band for six years, and plays the Trombone.

“We Chinese stress harmony between heaven and humans,” he said. “Therefore, I pay special attention to the harmony between my music, the instrument, and myself. I also make sure that my music is in harmony with other instruments in the band. It's teamwork. It is not only the individual, but the group – the whole body.”

Mr. Guo was persecuted in China. He was forced into slave labor for 16 hours per day in one of China's notorious labor camps. He was tortured with electric batons for five hours, and handcuffed to a metal bed for 24 days.

He was relieved that he could immigrate to Germany, and was sworn in as a German citizen a couple of weeks ago. Becoming a German citizen not only gave him freedom to practice Falun Gong, but also made it easier for him to join the band's activities in other European countries.

Last year, Mr. Su Hongyu and his mother enjoyed their first Christmas together in 15 years. Both of them are members of the Divine Land Marching Band.

Mr. Su experienced the persecution in China, even though he did not practice Falun Gong. As a musician, he had tried to participate in the inaugural Chinese International Vocal Competition by the New York-based NTD television station in 2007.

The Chinese communist regime heard about the invitation faxed to the American Consulate for Mr. Su's visa application. They ordered local police officers in Fushun City to find him and two other musicians who wanted to participate in the competition. He and one of the other musicians left their homes to avoid being arrested and persecuted. The passport of the third musician was confiscated.

“The police broke into my home four times, confiscated my computers, and terrified my grandmother,” said Mr. Su. “My mom exposed their persecution on NTD television in New York. The CCP went into high gear and issued a national arrest warrant for me. I had to hide in three different Chinese provinces during the past nine years.”

Mr. Su's mother, a Falun Gong practitioner, sent a registered letter to him with a Falun Gong exercise CD and a DVD of the Nine Commentaries on the Communist Party. The letter was intercepted by police. They found him at his workplace and asked about the sender. He told them that it was his mother. The police officer said, “Does she plan to come back to China? If she does, she will be arrested immediately.”

Having personally experienced the persecution, Mr. Su and his mother filed a lawsuit against Jiang Zemin, the former head of the CCP, in August of last year.

He is amazed by the sharp contrast between the suppression in China and the freedom one has overseas.

“Attachments Can Create Conflicts Between Practitioners”