People in Zurich Call for an End to the Persecution 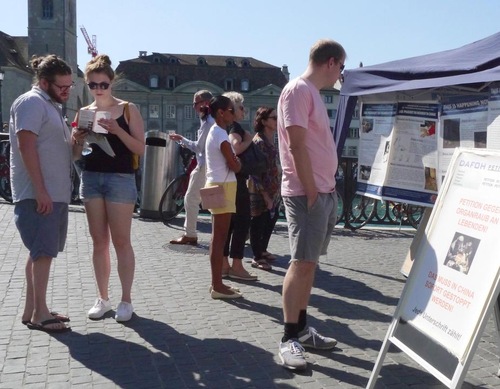 Photo exhibit at Limmatquai exposes the persecution of Falun Gong in China. 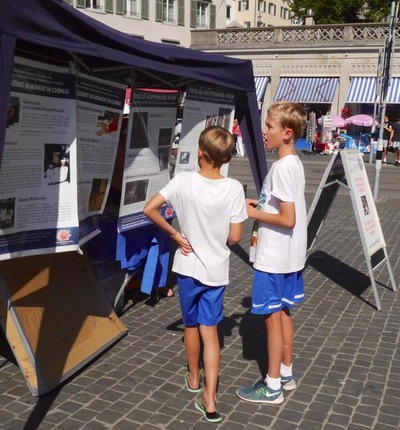 A young boy reacts upon reading about atrocities committed in the persecution. 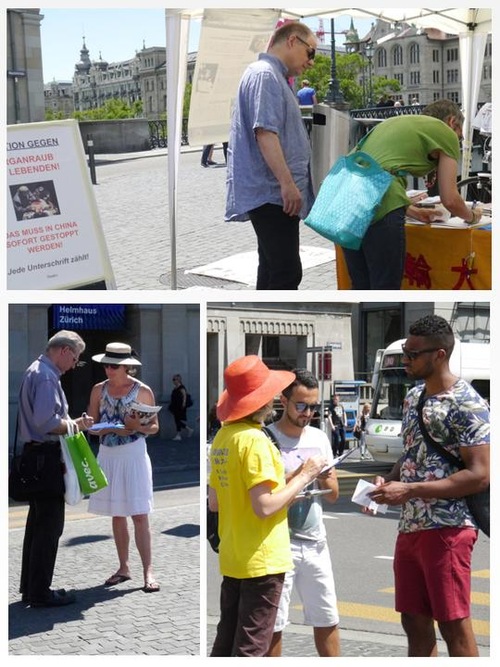 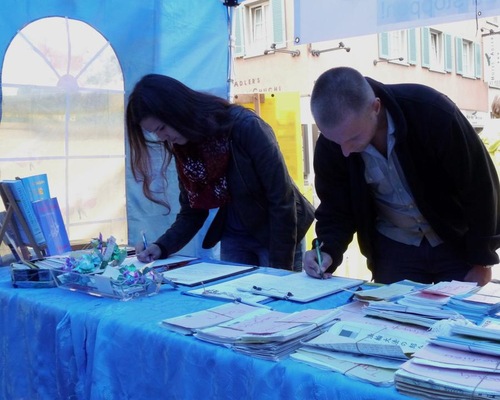 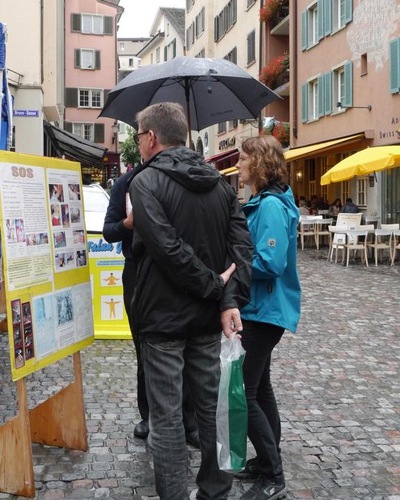 Photo exhibit at Hirschenplatz exposes the persecution of Falun Gong in China.

Toni and Nina learned about Falun Gong and the persecution for the first time. After signing the petition, Toni said, “What is happening in China [organ harvesting] is a despicable crime. It must stop!” Nina said, “It's so brutal! Everyone has the right to live.” Both of them agreed that the persecution of Falun Gong shouldn't have happened, and that people should enjoy freedom of belief. One of them wrote on the petition, “Such things shouldn't be allowed to happen any more. Everyone should live without fear.” Toni hopes that more people will learn about the persecution and help stop the organ harvesting crimes.

Daniel from the U.K. hopes that his signature will help those suffering persecution. He said, “It [organ harvesting] is abominable. I can't imagine that someone in this world would do that. It's disgusting!” Daniel had learned about Falun Gong on the Internet. He remarked, “Falun Gong is peaceful, and gives me a good feeling.”

Lino called the persecution of Falun Gong an “extreme terror,” and said it must stop. He had found out about Falun Gong by talking with a practitioner several years before. Lino said, “I'm deeply fascinated by Falun Gong. It guides people to self-improvement. It's so important for me. Falun Gong deserves people's respect.”

Over the course of the Information Days, many people learned about the benefits of practicing Falun Gong, and became interested in practicing it. Some took information about where to learn Falun Gong. Others took introductory materials for their family and friends. A number of people volunteered to help collect signatures. One woman told Falun Gong practitioners that her son had called her and asked her to come out and sign the petition.

Tourists from China also took this opportunity to learn about Falun Gong. Some of them decided to quit the Chinese Communist organizations that they had joined before. Several visitors from China told practitioners that they were happy to see that practitioners in their cities had resumed doing the Falun Gong exercises.

When some people commented that illegal seizure of organs also takes place in other countries, a practitioner told them, “The organ harvesting in China is sanctioned by the government, and carried out with the collaboration of the military, the legal system, the police system and the medical system. Organs have been listed with their prices on hospital websites. It is purely murder for profit by the state apparatus. What takes place in other areas in terms of illegal organ harvesting is not comparable. Not only Falun Gong practitioners, but also those involved in organ harvesting are victims of the crime.”

All who learned about the atrocities expressed the hope that the killing will soon stop.