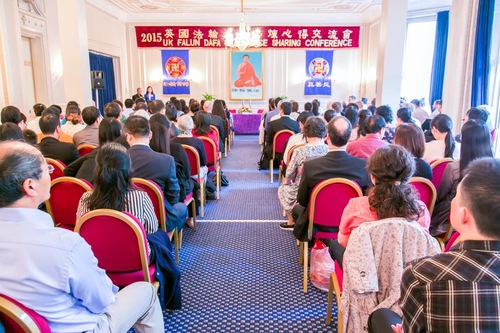 The practitioners spoke of the benefits they derived from practicing Falun Dafa and shared their understandings of the seriousness and sacredness of the Fa-rectification cultivation period. They also expressed their gratitude to Master Li for his compassion and salvation.

Practitioners agreed that they must study the Fa well, do the exercises, send righteous thoughts and tell the world about Dafa and the persecution.

Ms. Li talked about her door-to-door distribution of Shen Yun flyers in 2015.

“Some houses were far back on the lots and some were on the top of a hill. When I distributed flyers, I was very often tired and short of breath. I felt weak and perspired a lot,” she said.

She continued, “Then, I recited 'Climbing Mount Tai,' one of Master’s poems in Hong Yin, and did not stop until all of the houses in the area received a flyer. From time to time I reminded myself to strive forward diligently, never miss any opportunity to tell people about Dafa and be a qualified Dafa disciple.”

Ms. Yu talked about memorizing the Fa, as well as reciting paragraphs from Zhuan Falun on her way to a tourist site in Edinburgh, a distance of close to two miles, where she talked to Chinese tourists about Dafa.

“At the beginning I had many thoughts that distracted me, sometimes even very bad thoughts. A couple of times I even thought of not believing in Dafa. When this happened, I recited the Fa and this interference soon disappeared. Upon arrival at the tourist site, my thoughts were much purer, and I was ready to talk to the tourists about Dafa. I persevered for over one year in this effort because of memorizing the Fa, and assimilating into the Fa.”

Mr. Shen, 85, from Cambridge was involved in signature drives that called for an end to the Chinese regime's state-sanctioned organ harvesting from living practitioners. He studied the Fa in the morning before he took a bus to surrounding areas.

“Sometimes when I was overcome by fatigue, I read the Fa. Soon the fatigue disappeared and I was energetic again,” said Mr. Shen

Ms. Lu, in her 70s, used the global telephone platform for telling the Chinese people about Falun Dafa. She shared that her compassion moved Zang Yunjin, a military doctor, who performed several thousands of liver transplant operations.

Ms. Lu said in her message, “Yunjin, I am your fellow countryman. Please do not reject the calls, which are messages delivered before disaster hits!”

“Jiang Zemin uses your ability to perform organ harvesting. This is killing you. Money and fame do not come with birth, nor will they go with you after death.”

The text also said, “When I saw your photo in the investigation file, I cried. You are such a good fellow, handsome and kind in nature. You are part of society's elite and have selected this noble profession out of the innate kindness of your nature.”

She then told him that he was committing murder, and she told him the facts about Dafa and the persecution to help him from being ruined.

Ms. Zhang: Study and Prepare Well for the New China

Ms. Zhang tells the Chinese people about Dafa at a tourist site in Edinburgh. She met three overseas Chinese students and encouraged them to withdraw from the Chinese Communist Party (CCP) and its affiliated organizations. She asked that they get more information about Dafa on a few websites. She also told them about the Chinese regime's crime of forced organ harvesting from living practitioners.

“Jiang Zemin, the former head of the Communist regime, had launched the persecution in 1999,” she said. “Many of his accomplices who have persecuted Falun Dafa have already met with retribution for their evil deeds.”

She told them that the CCP will be eliminated and then China will take a turn for the better and, without the CCP, there will be a new China.

“You are students studying abroad. You have the intellect and ambition. You are your parents hopes and the pillars of China.” she said. “My dear children, make sure you study well, and be prepared to serve a new China without the CCP!” The three young ladies listened intently.

Solid Cultivation and Elimination of Human Notions and Attachments

One of the themes of the experience sharing articles was how to look within to examine every thought, constantly purify oneself and let go of human attachments through solid cultivation.

Ms. Wang from Cambridge shared how she overcame the CCP's Marxist-atheist ideology that held her in its control.

“I constantly looked within and discovered that many of my words and actions were very deviant. For example, I forced my son to study the Fa, so he said that I was like the CCP,” she said.

She continued, “I wasn't in a state of non-action or following the course of nature. On the contrary, I was very strong. My attachment to fighting and losing face was very strong.” She let go of her CCP ideology while doing media reports for the Shen Yun European Tour.

Walk Righteously on the Path of Fa-rectification Cultivation

A Western practitioner said, “Examining the slightest thought, and the motives behind them can uncover many attachments”

He continued, “What we do will have a positive effect and achieve our goals, as soon as our starting point is aligned with the standards of a Fa-rectification Dafa disciple.”

To find attachments, he asks himself, “Are my motives selfless and altruistic? Am I trying to validate myself? Am I clarifying the facts about Dafa because I want sentient beings to enter the future, or because I want to “get the job done” for the sake of my responsibility and mission? When I remind myself why I clarify the facts, I become more grounded.”

Ms. Wang has lived in a remote mountain village in Southwest England since 2006, and began to practice Dafa in 2008. She shared how she changed from being passive to positive in rectifying her cultivation environment.

She became a kindhearted, charitable person. She promoted Dafa and Shen Yun and collected signatures calling for an end to the Chinese regime's organ harvesting crime. Doing so gained her the support and respect of people in her area. 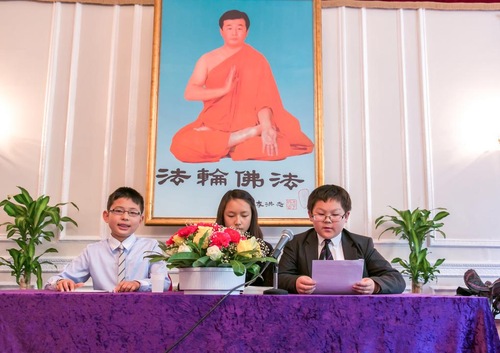 He Yuanyuan, 15, shared how she benefited from the Minghui Summer Camp. She shared that she tried to be more tolerant.

For example, there were five people in her room and some snored. She learned to forbear even if it meant that she could not sleep until 1:00 a.m.

She also did not want to listen to any criticism. Now, she looks within and searches for where she needs to improve.

“I can get frustrated quickly,” she said. “When this happens, I remember that I am a practitioner and I should follow the principles of Truthfulness-Compassion-Forbearance and what Master says in Zhuan Falun. Therefore, I try to calm down and control myself.”

“Minghui Summer Camp in France: A Productive and Rewarding Experience”

“Sydney, Australia: “I Was Looking for Something Wonderful and I Found It Here””