(Minghui.org) According to data compiled by Minghui.org, between May and August this year, 1,528 plaintiffs from 27 provinces in China were retaliated against for filing criminal complaints against former Communist Party leader Jiang Zemin, who directed the violent suppression of Falun Gong.

Forms of retaliation include arrests, harassment, house raids, and interrogation. In total, 868 were arrested between May and August, and 660 received threatening phone calls or were harassed by police at home during the same period of time. 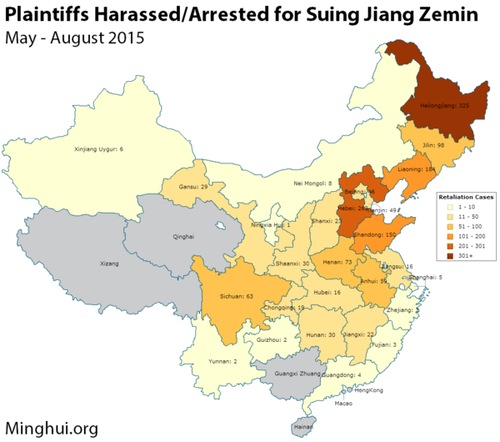 Below are the 12 provinces and centrally-controlled municipalities with the most plaintiffs retaliated against:

The retaliation began in May, with 7 residents arrested from Shandong and Gansu provinces. The national total of retaliation cases jumped to 120 in June, 757 in July, and 644 in August.

Those arrested were detained for periods ranging from several hours to days. In house raids, personal belongings including Falun Gong books and materials, computers, printers, cell phones, and cash were confiscated.

Local authorities in many parts of China resorted to various means in their attempt to stop the ever-rising tide of lawsuits against Jiang.

It was reported that officials from the 610 Office, Political and Legal Affairs Committee, and Domestic Security Division in some regions forced practitioners to sign documents stating they had wrongfully accused Jiang. Some even made practitioners promise not to initiate legal action against Jiang or deny having filed lawsuits against the former dictator.

In some cities and provinces in China, post offices are ordered to retain, destroy, or reject complaint letters regarding Jiang Zemin.

“Snapshot of Falun Gong Practitioners Whose Copies of Lawsuits Against Jiang Zemin Were Received by Minghui on September 14, 2015”

“Podcast (Cultivation): “A Young Practitioner Strives Forward and Assimilates to the Fa””