(Minghui.org) As Chinese president Xi Jinping's arrived in Seattle on September 22, 2015, Falun Gong practitioners held demonstrations urging him to stop the 16-year long persecution of their spiritual practice. They called on Xi to bring former Chinese dictator Jiang Zemin to justice for initiating the brutal persecution.

Seattle was the first stop of Xi's eight-day visit in America. Practitioners held up banners on the route from the airport to Xi's hotel that read: “The world needs Truthfulness-Compassion-Forbearance,” “Bring the murderers to justice,” “Stop the persecution of Falun Gong,” “Stop the state-sanctioned organ harvesting from Falun Gong practitioners,” and “Sue Jiang Zemin.” 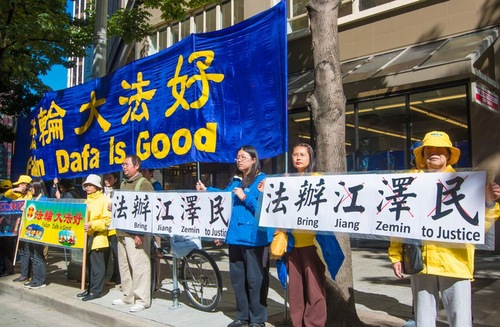 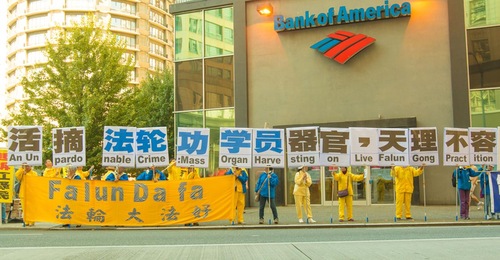 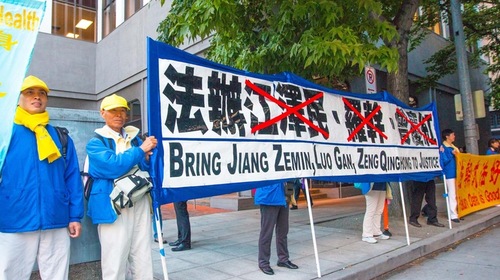 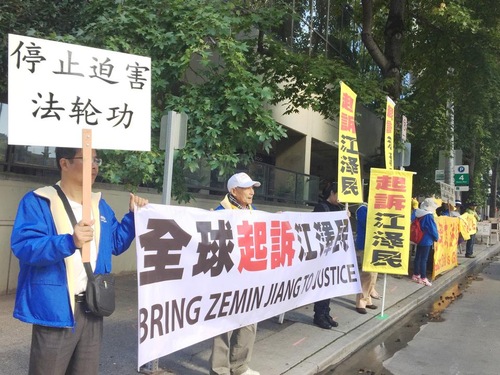 Practitioners outside the Westin Hotel where Xi stayed 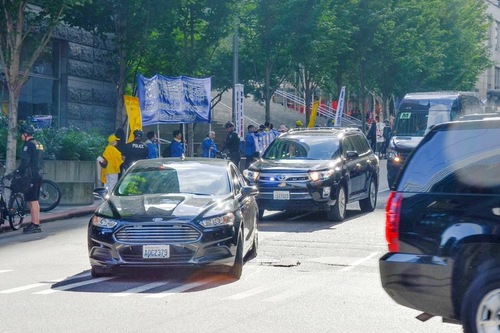 The coordinator of the Falun Dafa Association of the Northwest U.S.A., Chen Zhiping, said that the purpose of the group's demonstration was simply to let Xi know that the persecution of Falun Gong is completely illegal and should be stopped, and the chief perpetrator Jiang Zemin should be brought to justice. “That is our mission,” she said.

Ms. Chen said that Falun Gong is a spiritual cultivation group with no interest in politics. “All we ask is an environment where we can freely practice. But the persecution in China is still going on.”

She added that Xi's administration ended the labor camp system in China, and arrested some officials who were involved in the persecution, but that is not enough.

“We will not give up until Jiang Zemin is held accountable,” said Ms. Chen.“More than 170,000 practitioners from all over the world have filed criminal complaints against Jiang since May, and the number is still growing.”

The Falun Gong demonstrations received support from Seattle residents, some of whom had never heard about the persecution.

Several mainstream media reported on the Falun Gong group's demonstrations during Xi's visit in Seattle, including the Associated Press, Reuters, International Business Times, and the local newspaper The Stranger.

Sydney Brownstone from The Stranger interviewed several practitioners, who shared their reasons for joining the protest.

Tang Lijuan from San Francisco, a former philosophy professor in China, told Brownstone that her son was tortured to death for his belief in Falun Gong. “Police arrested my son and put him in jail, where they beat him with electric batons and force-fed him. He died soon. I was jailed twice also,” Ms. Tang said. 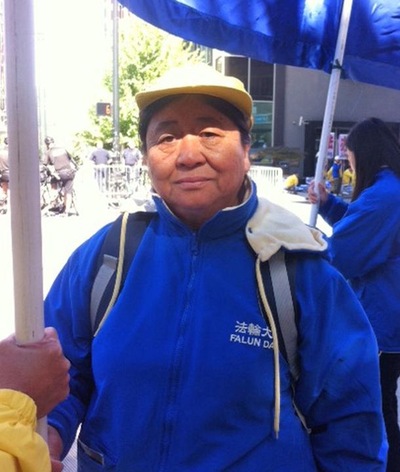 Tang Lijuan: “The persecution was launched and directed by Jiang Zemin. He must be held accountable.”

Wang Shengjie from Los Angeles had the same wish. His father was put in jail five times. “We can freely practice in America,” Wang said, “but the persecution is still going on in China.” 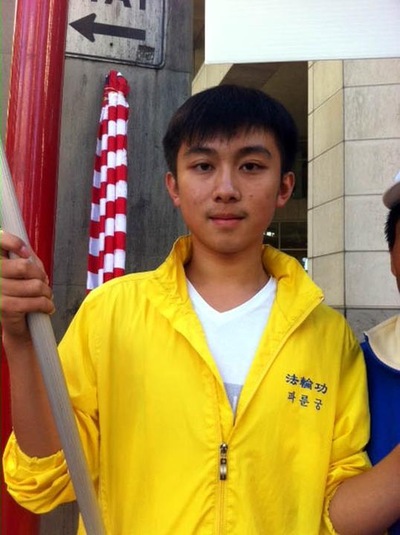