(Minghui.org) Practitioners from over 30 countries came together for the 2015 European Falun Dafa Experience Sharing Conference on September 19 in Vienna, Austria. Before the conference, some of the attendees gathered for meditation at the Austrian Parliament Building.

Built between 1874 and 1883, this building is one of the most popular tourist sites in Vienna. Architect Theophil Hansen considered his Greek-inspired design to be a monument in the modern era that reminds us of the sacredness of God and heaven.

Aglow in the morning light, the gentle, flowing motion of the Falun Dafa exercises against the backdrop of the towering structure prompted many passersby to stop and find out more. 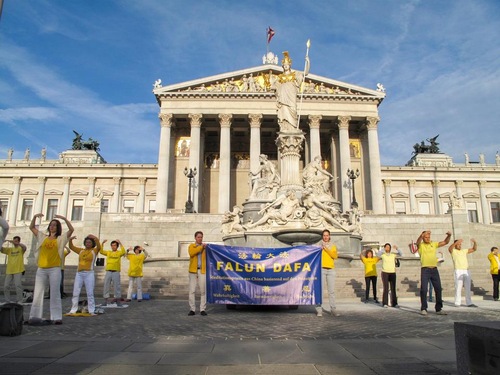 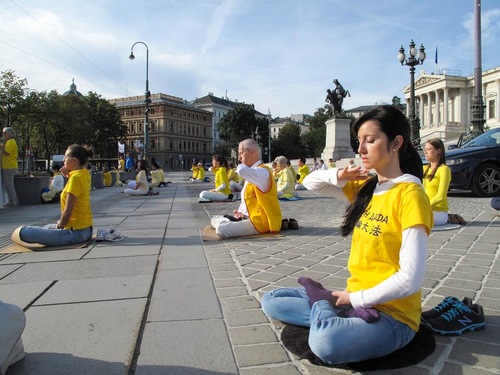 Practitioners exercise together at the Austrian Parliament Building on September 19, 2015.

“I did 45 minutes of sitting meditation here today even before I realized it,” said a participant, Boiana, from Bulgaria. “It felt great—you can feel the strong energy at a group exercise like this,” she said. Boiana started practicing Falun Dafa a little over a year ago and could only sit in crossed-legged meditation for 40 minutes at first. 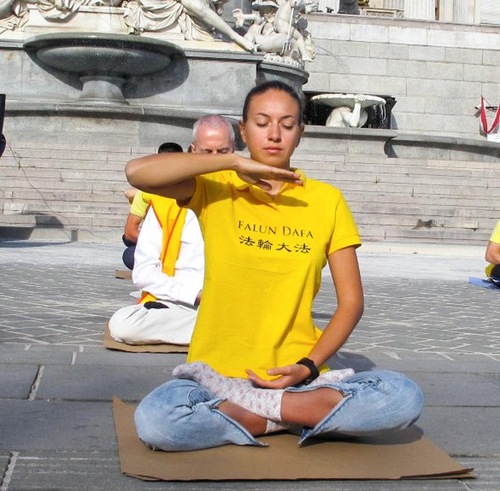 Boiana from Bulgaria said there is a strong energy when exercising with a group.

Boiana does one hour of exercise with other practitioners before going to work in the morning. She said the practice made her healthier and improved her relationships with family and friends.“Falun Dafa has been the greatest blessing for me,” she said.

Many tourists stopped for information or to take photos. Two buses of Chinese tourists stopped and many of them looked surprised to see the Falun Dafa event. Given the massive, defamatory propaganda that is a part of the persecution of Falun Dafa in China, it is likely they had believed the practice to have been banned everywhere. Some took materials and said they would seize the opportunity to learn the real story behind the persecution. 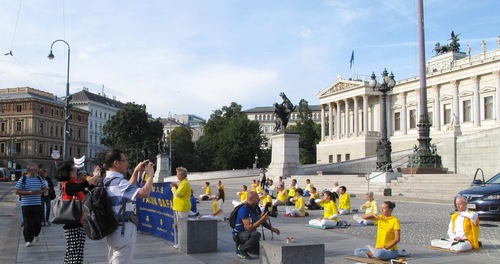 Tourists take pictures of the exercises.